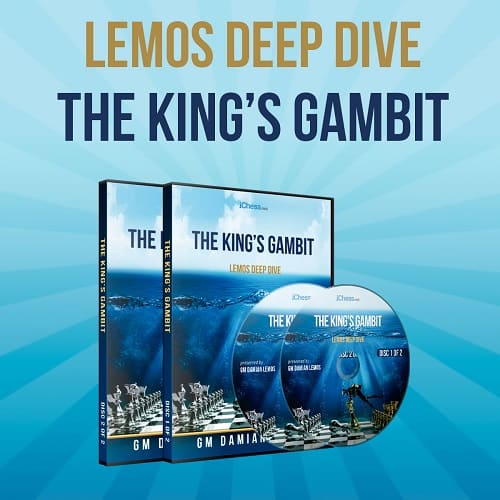 The King’s Gambit has fascinated the greatest chess players throughout all of chess history. This is an opening for the romantic, for the brave and creative chess player who thrives on wild sacrifices and extravagant combinations. This was the opening for the Magician of Riga, Mikhail Tal.

How to Play The King’s Gambit – GM Damian Lemos

The King’s Gambit has fascinated the greatest chess players throughout all of chess history.

This is an opening for the romantic, for the brave and creative chess player who thrives on wild sacrifices and extravagant combinations. This was the opening for the Magician of Riga, Mikhail Tal.

Now you can follow in the footsteps of the legends, making tactical magic on the board with this comprehensive Deep Dive into the King’s Gambit.

You offer your f-pawn, immediately fighting for the initiative and challenging black for control of the center – and if your opponent isn’t prepared, they will quickly find themselves in serious trouble.

GM Damian Lemos demonstrates how, regardless of whether they accept the sacrifice or not, you can respond with force and keep tremendous pressure on your opponent.

claimed he’d found a ‘bust’ to the gambit — after losing to it, of course — but the stats show quite the opposite: most King’s Gambit games are open, unpredictable affairs where the tactical player can get exactly the positions he enjoys.

So sit back and relish the attacking prowess of the King’s Gambit as GM Damian Lemos teaches you everything you need to know in order to start playing this opening today!

Damian Lemos is a grandmaster from Argentina with a top rating of 2559 Elo.

The King’s Gambit is about the most fun you can have in chess: your pieces fly out, pawns rage forward, you sacrifice with wild abandon and announce mate on move 18.

At least, this is what happened when the King’s Gambit was in full bloom during the romantic era of chess in the 18th and 19th century.

With the move 2.f4, White breaks with conventional wisdom on the main opening principles. Instead of developing his pieces, he moves a pawn away from defending his own king. Playing the King’s Gambit is a risky and double-edged choice.

Here’s just some of what you’ll see in this course:

Before you take a look at any variations, there is a key rule you must know. After 1.e4 e5 2. f4, if Black does not capture the pawn, White should not be tempted to play the easy looking fxe4 as this will lose the game immediately.

This is rule 1 for playing the King’s Gambit successfully!

Black would simply reply with Qh4+ and collect the e pawn afterward with a threat on the h1 rook. There is no way out for White after this so it is crucial to remember that the e-pawn shouldn’t be taken, not at least until Nf3 has been played to protect the h4 square.

When Black plays the waiting move …Nc6, White has all the options open. Remember, of course, not to play fxe5 as it loses immediately!

On top of that, the knight also adds support to the center, making it a sound principled move. If Black now takes the pawn with 3…exf4 then White can play 4. d4, gaining space in the center while also unleashing the dark-squared Bishop. See the diagram to the right.

After 1.e4 e5 2. f4 Bc5 White should again leave the f-pawn hanging and play 3.Nf3. If Black makes the mistake of playing 3…exf4 then the reply is the same as the previous chapter – however, the consequences are far more serious for Black because when White plays 4. d4, he gains a tempo on the Black bishop on c5 and also gets a solid center in the process. This will quickly go South for Black!

A more solid move would be 3…d6. Here, White can play 4.Nc3 with the hope of transposing into a Vienna and eventually trading off that knight for the powerful Black bishop via Na4.

An important thing to remember is that if the f4 pawn is still standing at this point and the Black bishop on c8 has not moved, advancing with f5 is a good idea. This closes the c8-h3 diagonal and restricts the bishop on c8. White also prepares for an easy pawn storm on the kingside.

And that’s not all… GM Lemos covers all the other variations you need to know, explains the ideas behind the opening, and dives into a number of model games showing how the King’s Gambit began, and how it gets played nowadays at the top level. If the best players can sometimes fall victim to this opening, your club opponent’s certainly will!

Includes a PDF course summary, a full PGN of all the games, and puzzles to test your knowledge. After watching this course you’ll be able to play this sharp opening against opponents of even much higher rating than you and get a comfortable advantage in the opening.