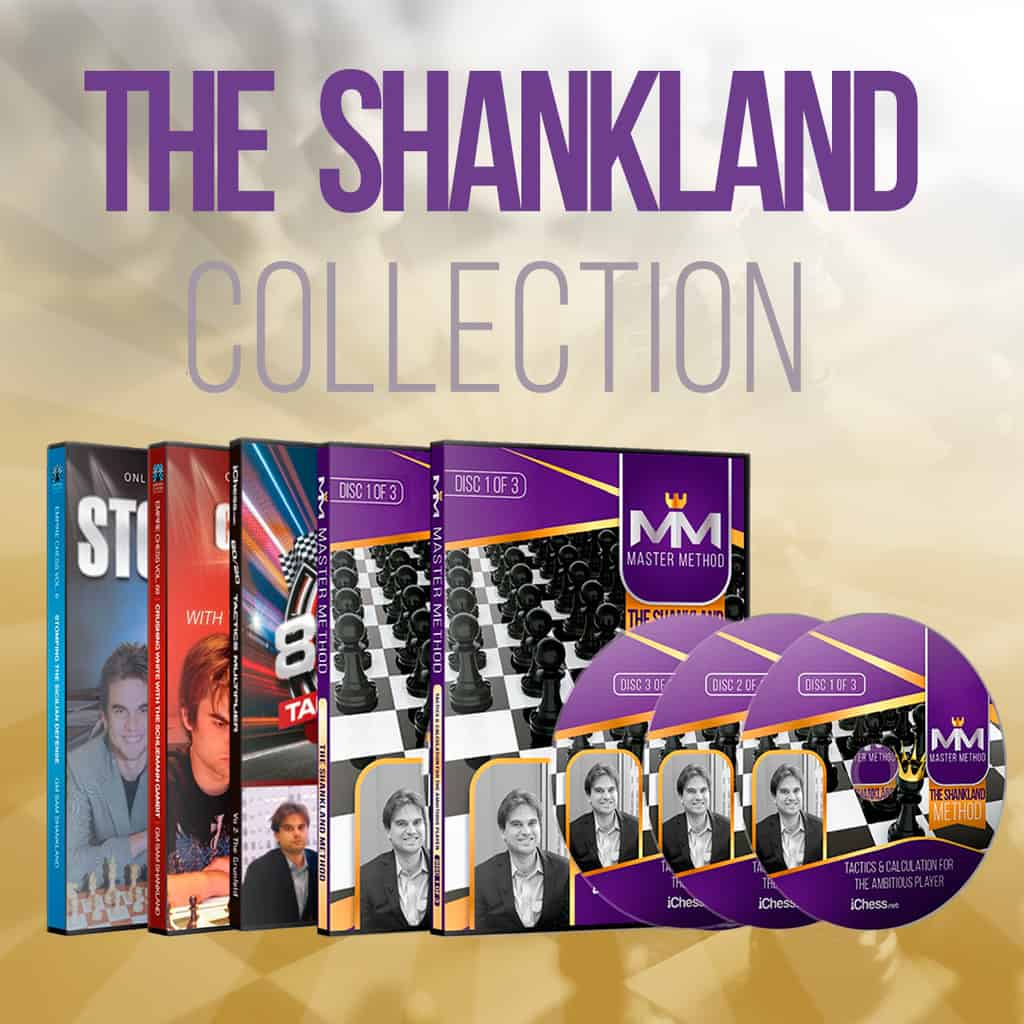 This incredible 16 hour course from Super GM Sam Shankland (2674 Elo) reveals his approach to becoming a master calculator and finding the most forcing, powerful moves at the board.

This incredible 16-hour course from Super GM Sam Shankland (2674 Elo) reveals his approach to becoming a master calculator and finding the most forcing, powerful moves at the board.

In each of the 55 chapters, GM Shankland examines an instructive, dynamic game, revealing why and how the winner was able to create chances and convert them into victory.

Sam asks us to consider one question: if we have a strategic or tactical aim but our opponent seems to be preventing it, what happens if we play it anyway?

It’s this consideration that allows us to put maximum pressure on our opponents and opens up a new world of creative possibilities at the board.

Sam has carefully selected the games so that most of them should be new to you, even though they feature some of the biggest names in the game, including Carlsen, Anand, Topalov, Kasparov, and Aronian. Of course, Sam includes plenty of his own games too – losses as well as wins – revealing the secrets he has found in his analysis.

Sam teaches at a fast pace and demands the interaction necessary for you to make real improvement. For any ambitious player looking to take their calculation, attacking play and dynamism to a very high level, there is simply no other course like this.

Includes a 1-hour bonus of GM Shankland playing online blitz, voicing his thoughts and analysis in real time plus a fascinating insight into his personal philosophy and best advice for improving players in a Q&A session!

Chess tactics win games, which is why we should work on our tactical ability. However, most players just stay sharp by solving random puzzles.

Now you can stand out and get the edge in your games with Tactics & Calculation for the Ambitious Player from Olympiad Gold winner, GM Sam Shankland.

This stunning 16-hour course breaks down the deadliest tactics from top-level play, uniquely splitting them into 6 categories, ranging from Attacking the King to Endgame Tactics.

By challenging students to find the strongest moves then explaining the mechanics of the combination, GM Shankland improves both your calculation and pattern recognition, transforming you into a master tactician!

Sam Shankland never stops! No sooner has he been crowned US Champion – sensationally finishing ahead of Caruana, So and Nakamura – than he’s back with another incredible training for you!

And there’s no better opening for this series than the ultra-sharp Grunfeld, a favorite weapon of both Kasparov and Fischer, famously used by Bobby to win the Game of the Century – one of the many games covered here.

In this DVD series, we will review seven carefully chosen games in which white mounted a successful attack against the Sicilian Defense. The critical theme that ties all the games together is that white is best advised to develop his pieces to active squares and create a sound, harmonious position that limits counterplay before launching the trademark pawn storm to break down the defenses to the black king.

While the opening theory is not the main subject of the series, the seven games come from many different Sicilians, most prominently the Dragon, Taimanov, Sveshnikov, and Najdorf variations. All of the chosen games are discussed in their entirety, and all of them were played by world-class players. It is my hope that this series will give the aspiring 1. e4 player knowledge, experience, and inspiration in tackling the most complex of all opening systems.

The main appeal of choosing the Schliemann is that White does not have many credible side-lines; advocates of this repertoire will be able to play the presented analysis over the board. This DVD will provide club level players with a strong repertoire that they can rely on.