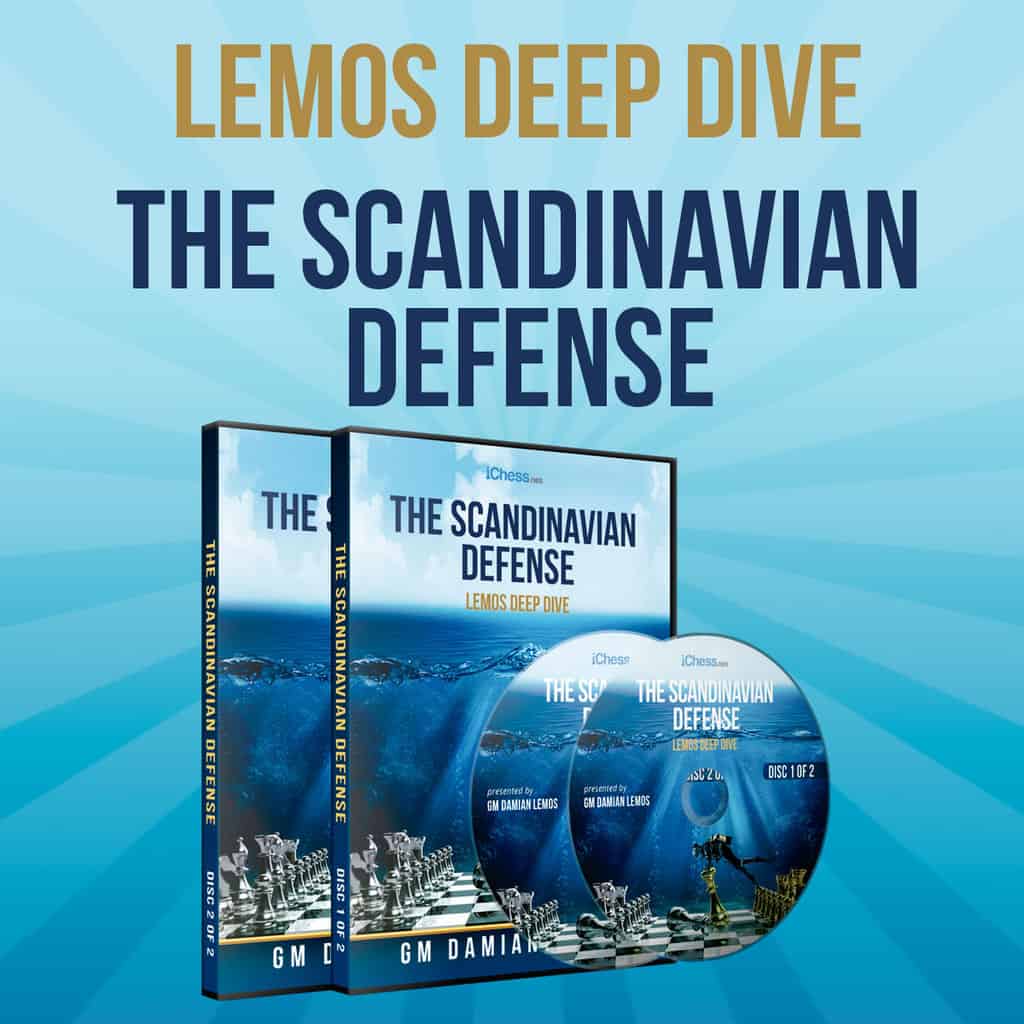 1 Review(s) (4.00)
$59.99
The Scandinavian Defense is a tough nut to crack. Thanks to the efforts of GM Sergey Tiviakov and other strong GMs, the Scandinavian in general, and the 3…Qd6-line in particular, have attracted more and more attention recently and have found their way back to the tournament halls.
Add To Cart
About the Course Additional Information Reviews (1)
Product Description

How to Play The Scandinavian Defense – GM Damian Lemos

Looking for a chess opening for Black against 1.e4 which is solid, does not require an endless amount of theory to memorize and still offers decent chances to outplay your opponents?

With clear-cut plans and just a few variations to study, the Scandinavian Defense seems a good option for all club players who are looking for a shortcut when studying openings.

The Scandinavian Defense is a tough nut to crack. Thanks to the efforts of GM Sergey Tiviakov and other strong GMs, the Scandinavian in general, and the 3…Qd6-line in particular, have attracted more and more attention recently and have found their way back to the tournament halls.

In this comprehensive 8-hour Deep Dive course, GM Damian Lemos builds up your knowledge of this powerful opening weapon, demonstrating how to combat each of White’s sidelines and mainlines in turn.

Apart from covering all reasonable setups for White against the Scandinavian Defense, GM Lemos also shows how these ideas play out in practice through the analysis of instructive recent top level games, making sure you’re ready with the most powerful reply!

Now you’ll frustrate 1.e4 players used to playing their pet lines, forcing them to face an opening they don’t come across that often.

Damian Lemos is a grandmaster from Argentina with a top rating of 2559 Elo.

The Scandinavian Defense is a chess opening for Black against 1.e4 which starts with the moves 1.e4 d5 (see the next diagram).

The opening is named in honor of several Scandinavian chess players who analyzed this opening in the late 19th century and showed that it’s a decent way for Black to deal with the move 1.e4.

Playing the Scandinavian Defense can be a vital alternative for all Black players who are tired of entering the highly theoretical terrain in the Ruy Lopez after 1…e5 or several sharp Sicilians after 1…c5.

The Scandinavian allows the Black player to immediately take the opponent out of his comfort zone by playing a move which is not as frequently played as against 1.e4.

The Scandinavian Defense gives you excellent winning chances due to its positional imbalances and complexities. It is a highly flexible and tricky opening where Black starts the game with a solid foundation and can then outplay the opponent positionally.

Here’s part of what you’ll see in this course:

Sidelines In The Scandinavian Defense

White keeps his c-pawn free to advance. The downside of this move, however, is that Black can counter with 3…e5! going for an immediate clash in the center.

Black is temporarily a pawn down, but he gets very active piece play in return and White has difficulties to keep his extra pawn.

The pawn on e5 is currently hanging and quick developing moves like …Bg4+ and 0-0-0 are going to follow.

If White continues with 5.dxe5 Qxd1+ 6.Kxd1 Nc6 (see the diagram below), the play is very similar to the variation above.

Move 3.Nc3 is by far White’s main move and brings us closer to the mainline. In this course, GM Damian Lemos recommends the move 3…Qd6 for Black which gained some popularity for the last years, mainly thanks to the efforts of the Dutch GM Sergey Tiviakov.

With 3…Qd6, Black keeps his queen close to the center and stops Bc1-f4. The queen is slightly at risk on d6, but Black has got rid of White’s center in return.

Model Games in The Scandinavian Defense

In order to properly learn a new opening, it is not enough to take a close look at theoretical lines. You also need to study some classical model games which were played from the opening you want to play.

As the famous Grandmaster Yasser Seirawan once put it: “Study entire games. Your study can become disjointed if you just learn an opening set-up. Don’t just study the opening and early middlegame but instead play the entire game. Don’t just stop when your side has a good position.”

That said, the Scandinavian Defense is flexible enough to allow you to vary a little from one game to the next, thus avoiding your opponents’ specific preparation.

★★★★★
Ovidiu LUPU (Sep 10, 2019) Verified buyer
Interesting ideas in Scandinavian defense with Qd6. Well presented by Damian, even it is doubled by medium-low analyses. You cannot rely only on this presentation to have a powerful opening for black against e4. There are lots of powerful positions which white can easily get without following the main line, which Damian here, considered to be the only one which might give more than equality for white. Moreover there are games (like Shirov-Tiviakov) in which black was smashed quite easily in this line. As a conclusion, in case you need to build your system against e4, you can start from here, but you need to study lots more games doubled by computer analyses for this Qd6 line.
Add a review