The SNIPER! – Vol 4 – Transpositions to other Openings – GM Ron Henley 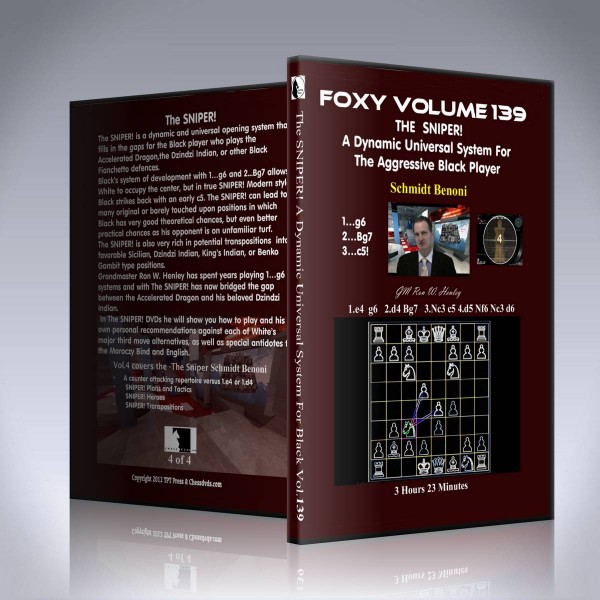 The SNIPER! is a dynamic and universal opening system that fills in the gaps for the Black player who plays the Accelerated Dragon, the Dzindzi Indian, or other Black Fianchetto defences. Black’s system of development with 1…g6 and 2…Bg7 allows White to occupy the center, but in true SNIPER! Modern style, Black strikes back with an early c5!

The SNIPER! is a dynamic and universal opening system that fills in the gaps for the Black player who plays the Accelerated Dragon, the Dzindzi Indian, or other Black Fianchetto defenses. Black’s system of development with 1…g6 and 2…Bg7 allows White to occupy the center but in true SNIPER! Modern style, Black strikes back with an early c5!

The SNIPER! can lead to many original or barely touched upon positions in which Black has very good theoretical chances, but even better practical chances as his opponent are on unfamiliar turf. The SNIPER! is also very rich in potential transpositions into favorable Sicilian, Dzindzi Indian, King’s Indian, or Benko Gambit type positions.

Grandmaster Ron W. Henley has spent years playing 1…g6 systems and with The SNIPER! has now bridged the gap between the Accelerated Dragon and his beloved Dzindzi Indian. In The SNIPER! DVDs he will show you how to play and his own personal recommendations against each of White’s major third move alternatives, as well as special antidotes to the Maroczy Bind.