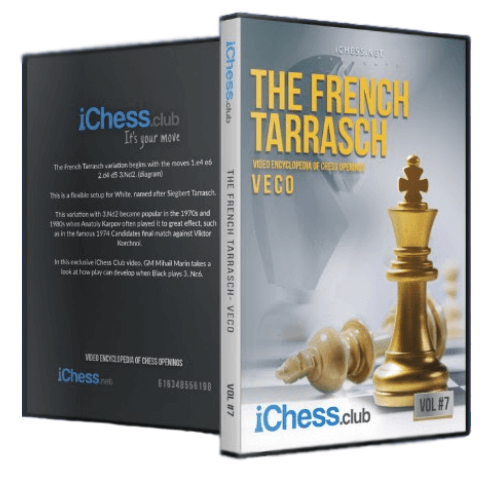 In this course, you will access the work of 2 great coaches, IM Robert Ris and GM Mihail Marin, who will provide you with a full set of weapons to successfully face the French Defense with this 3.Nd2 variation.

The French Defense is a semi-closed chess opening for Black which occurs after the moves 1.e4 e6

It is one of the most trusted openings in chess, popular at all levels from beginner to strong grandmasters.

The French Defense has been used relied upon by both the great chess masters of history and many leading grandmasters today as the main weapon for Black.

This is a flexible setup for White, named after Siegbert Tarrasch.

This variation with 3.Nd2 became popular in the 1970s and 1980s when Anatoly Karpov often played it to great effects, such as in the famous 1974 Candidates final match against Viktor Korchnoi.

In this course, you will access the work of 2 great coaches, IM Robert Ris and GM Mihail Marin, who will provide you with a full set of weapons to successfully face the French Defense with this 3.Nd2 variation.

Ris is a Dutch International Master who learned how to play chess from his father when he was eight years old, and started playing in SV Amstelveen. In 2002 he started playing for SC Utrecht, and, later, in other clubs.

He has won the Romanian Championships on three occasions and has played in the Chess Olympiads ten times, winning a bronze individual medal in 1988. For several years he was editor of the magazine Chess Extra press.

So Black has tried several responses over the years, get to know them with these super coaches!

3… Nf6 aims to keep the center closed, IM Ris will cover the line after 4.e5 Nfd7 and we get into a pawn chain central formation where we will learn a typical Knight maneuver as the f3 square is ofter kept free for the Queen’s Knight! And also the general ideas of play with and against a pawn chain will be shown by IM Ris.

Other possibilities for Black are moves like 3…c5, and 3…Be7, both covered in the following chapters.

The French Tarrasch 3…a6

So Black can try playing directly with 3…c5 but also 3…a6 preventing 4.Bb5+ is a possibility, here GM Marin will show us an important tabiya for this variation that will help us to understand way better the several lines and possibilities for white.

Also, GM Mihail Marin takes a look at how play can develop when Black plays 3…c5 and 3…Nc6.

PLUS over 300 GM games in the French Tarrasch…

We’ve put together a 300+ game PGN of recent (2019-) games in the French Tarrasch – the perfect resource for finding new ideas once you’ve mastered everything in this course.

★★★★★
Keith (Jul 07, 2022)
Really good course on the French Tarrasch. I've been looking for a weapon against the French and found this to be a great resource.
Add a review