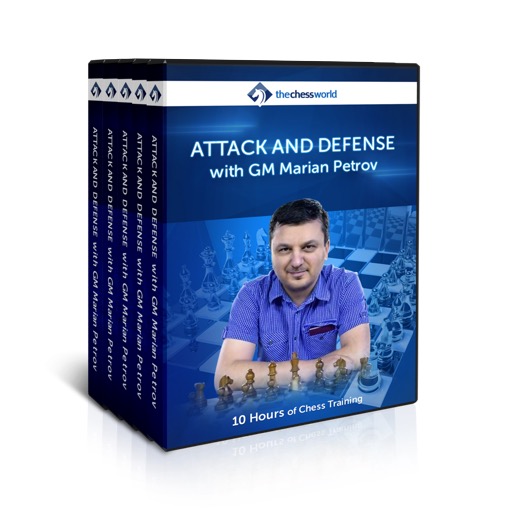 How to Play Powerful Attacking and Defensive Sequences to Finally Become the Player You Meant to Be...

Let me ask you a question. How many of your important games are decided by all-out, guns blazing attacks?

Less than half? Less than a quarter?

Most club players have to settle for winning a pawn or two and converting in the endgame. A win’s a win, sure – but these aren’t games you’ll remember. This isn’t what you play chess for.

Want to become an ATTACKING GENIUS and create your own “immortals”? GM Petrov is here to help.

His new 10.5 hour Attack and Defense is a masterclass on winning games with direct attacking play.

What makes this course unique?

As you can probably guess from the title, this course examines attack and defense at the same time – they are, after all, 2 sides of the same coin.

By showing how some threats can be defended – and how to counter those ideas - GM Petrov builds up the sophistication of your attacks into laser-accurate combinations.

Some of what you will learn:

To make it at the next level, you need to be crushing your rivals at this level. GM Petrov’s Attack and Defense shows you how to do that… and have a lot of fun in the process!

Downloadable, complete set of PGNs of games covered in the course that you can analyze it at your own pace and convenience. A must have treasure chest for any serious player.

Watch GM Petrov playing live and applying every single principle covered in the Attack and Defense Mastermind. GM Petrov annotates the games on-the-fly, sharing his ideas and secrets of success.  A must-have for any serious chess player.

Receive a FREE $25 gift certificate to be used towards future purchases in TheChessWorld store.

[Only available to the first 50 buyers.]

is an accomplished professional chess coach, theorist, and Bulgarian champion for 2002 and 2017, as well as winner of many open tournaments around the world. Also a FIDE trainer and coach of the team of Wales at the last Olympiad in Baku in 2016. He graduated from the National Sports Academy in Sofia, Bulgaria with a Bachelor's degree in Chess Pedagogy, a four-year undergraduate program designed to prepare top-level chess trainers.