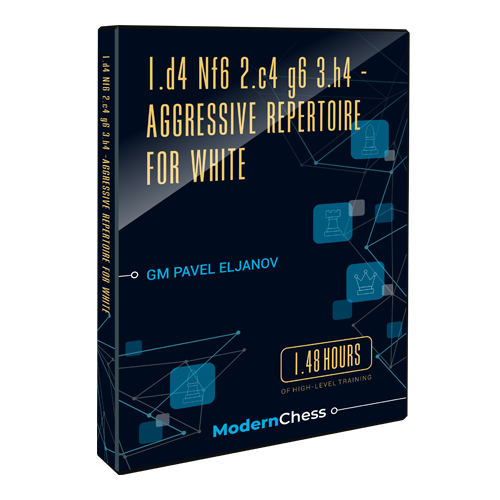 I am happy to present a highly topical and very sound repertoire for White which is based on 1.d4 Nf6 2.c4 g6 3.h4 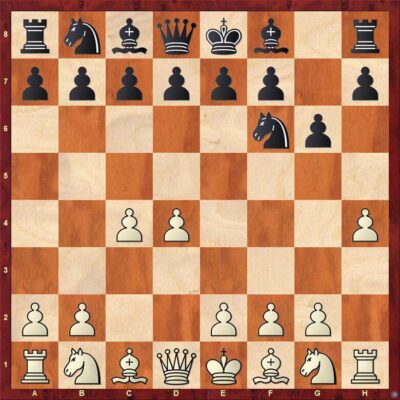 I started analyzing this a long time ago. At some point, I came across computer games where the engines played h2-h4 on move 3 on regular basis. Even though I was skeptical, I started to work on this idea. I need to point out that 6-7 years ago, the engines were not such authority as nowadays. Later, in 2016, I saw Anton Korobov playing this line against Rinat Jumabayev. Thanks to this game, my enthusiasm for this line returned. Even though Anton lost this game, in the same year, Topalov played 3.h4 at Candidates Tournament against Anish Giri. The game ended in a draw since Topalov failed to prove an edge in the opening.

In the next three years, this variation disappeared from the practice of the strongest chess players and quite recently, in 2019, one of the well-known innovators of modern chess Alexander Grischuk began to play this line on a fairly permanent basis with varying success. However, he brought a large number of new ideas and many people picked up after him, including Magnus Carlsen. In general, this line became quite popular.

In my opinion, there is room for new ideas and concepts in this still relatively less explored line. Modern practice shows that players of all levels can play 3.h4 with both colors. Almost all the lines lead to a full-blooded game where it’s slightly easier to play with White. One of the main points behind 3.h4 is to prevent Black from obtaining a favorable version of the Gruenfeld.

There is an additional factor that contributes to the rising popularity of the entire concept with h2-h4. The new generation of neural network-based engines made us reconsider the advance of the rook pawn in almost every position. For example, in the games of Alpha Zero, we can often see the h-pawn going all the way to h6 at an early stage of the game. Besides restricting the opponent’s pieces and providing space in the middlegame, this pawn is a tremendous asset in every endgame. In the current database, you will see this concept on multiple occasions.

The new feature called Computer Practice allows you to play several critical positions against a strong engine. In most cases, you need to convert an advantage in a typical position. After practicing these positions with an engine, you will be confident when similar situations arise in your practical games.

is a Ukrainian chess grandmaster. He has won two team gold medals and one individual silver medal at the Chess Olympiads.