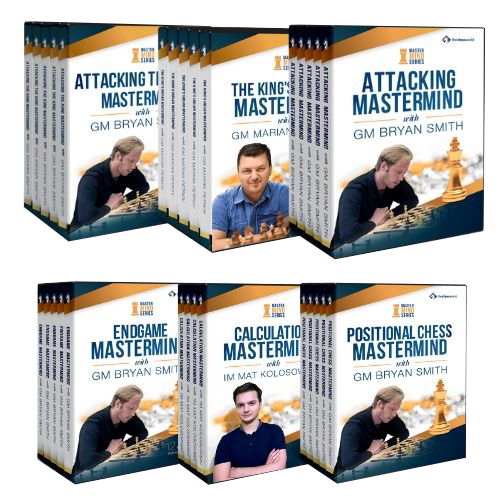 Learn the most crucial chess skills including calculation, endgames, positional understanding, and attacking chess straight from some of the top coaches: GM Bryan Smith, GM Marian Petrov, GM Jacek Stopa, IM Milovan Ratkovic, and IM Mat Kolosowski. 220 hours of comprehensive training guarantees that you will take your chess to the next level in no time!

IM Milovan Ratkovic comes in with his latest course Queen’s Gambit Declined – a 10+ hour video training focusing on refuting the best possible replies by White (including some tricky ones like the Catalan or the London).

In Strategy Mastermind you get 10 hours of HD training videos with IM Kolosowski explaining and breaking down every strategy in crystal clear English.

In King’s Gambit Mastermind, GM Petrov teaches you not just the theory, but also how the absolute legends approached the King’s Gambit, so that you can follow in their footsteps and win just as brilliantly as they did.

Reti Opening Mastermind features IM Milovan Ratkovic training you for TEN hours in how to master this dangerous system…complete with updated, cutting edge ideas from his own analysis.

GM Jacek’s groundbreaking new course gives you ten hours of training in King’s Indian Attack and covers how GMs like Fischer, Kramnik and Sasikiran used this opening in their very own way.

GM Marian Petrov’s Scandinavian Mastermind arms you with a response to 1.e4 that is backed by Carlsen, Kramnik, and Karpov…PLUS is so non-theoretical…you can master the finer points of the opening by this weekend!

Croatian coach GM Davorin Kuljasevic has just completed Improve Your Decision Making – a 10 hour course laser-focused on the crucial topic of decision-making. Drawing on years of experience coaching club players rated between 1600 and 2200, Davorin has identified the 9 types of decisions that players have to make in real games.

Pattern Recognition Mastermind teaches you to see and solve advanced and hidden chess patterns. If you want to be able to “insta-solve” tactics like Nakamura and pounce on every opportunity you get – without having to spend every spare second of your life training – take IM Kolosowski’s new 8-hour course.

In his new Calculation Mastermind course, Mat has drawn on decades of chess ideas to teach you the QUICKEST and most EFFECTIVE methods for finding strong moves in any position.

In this 12-hour Masterclass, GM Bryan Smith thoroughly explains 159 most important chess endings that are responsible for nearly every endgame win or loss. And you only have to learn these techniques once – they never change!

In this 10-hour, 9-chapter course, GM Bryan Smith reveals 25 most effective attacking plans and meticulously explored EACH and EVERY one of them in this brand-new Attacking Mastermind. The outcome is the powerful attacking arsenal that you can use to crush your opponents.

In this 10-hour, 21-chapter course GM Bryan Smith reveals the 21 most important positional elements that are responsible for nearly every win or loss over-the-board! Once you master those, you will never see chess the same way again!

In brand new 10.5-hours Mastermind, GM Marian Petrov gives you a complete opening repertoire for Black based on Grunfeld Defense! GM Petrov does a superb job clearly explaining every main-line, side-line, and transposition making sure you have a world-class opening preparation that will serve you a lifetime.

Watch IM Kolosowski demolish his competition using the ideas, principles, and plans demonstrated in the course. This extra video will help you see how everything works together!

Set of extra training tasks, which are designed to challenge your endgame skills after completing the course. Think of it as your final exam. PGNs with solutions are included as well.

★★★★★
Eric Linch (Aug 01, 2019)
This is one of the most complete collections and among my most favorite of all time. Bought it with a very good discount, download was surprisingly smooth. Good idea focusing on "skills" rather than theories or other not so practical things. Calculation Mastermind and Attacking Mastermind are my top pick. Gained me many points. Only suggestion, please make a good mastermind course on strategy and defense.
Add a review