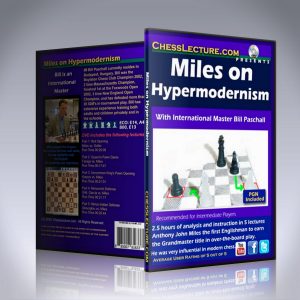 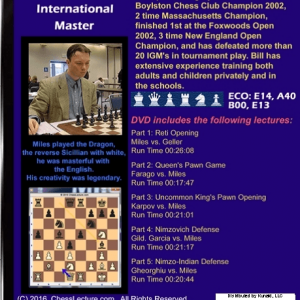 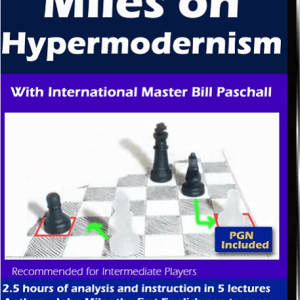 Anthony John Miles (23 April 1955 – 12 November 2001) was an English chess Grandmaster, the first Englishman to earn the Grandmaster title in over-the-board play. Miles was very influential in modern chess. His creativity in the openings was legendary his creativity, in general, was legendary. He was the first really great English chess master. He did leave a large amount of quality material and he definitely leaned toward hypermodern chess. Miles liked to play the Dragon, reverse Sicilian type games with white. He was masterful with the English. In this DVD Bill explores 5 of Miles amazing games in Hypermodern lines.

Content: 106 minutes of instruction and analysis in a series of 5 lectures. PGN Included.

Chess Fans have said: I like the way Miles played in the spirit of hypermodern play with his bishops fighting for control of the center! Very well explained. Thanks, Bill!

The Exchange Sacrifice on c3 in the Sicilian – GM Bryan Smith