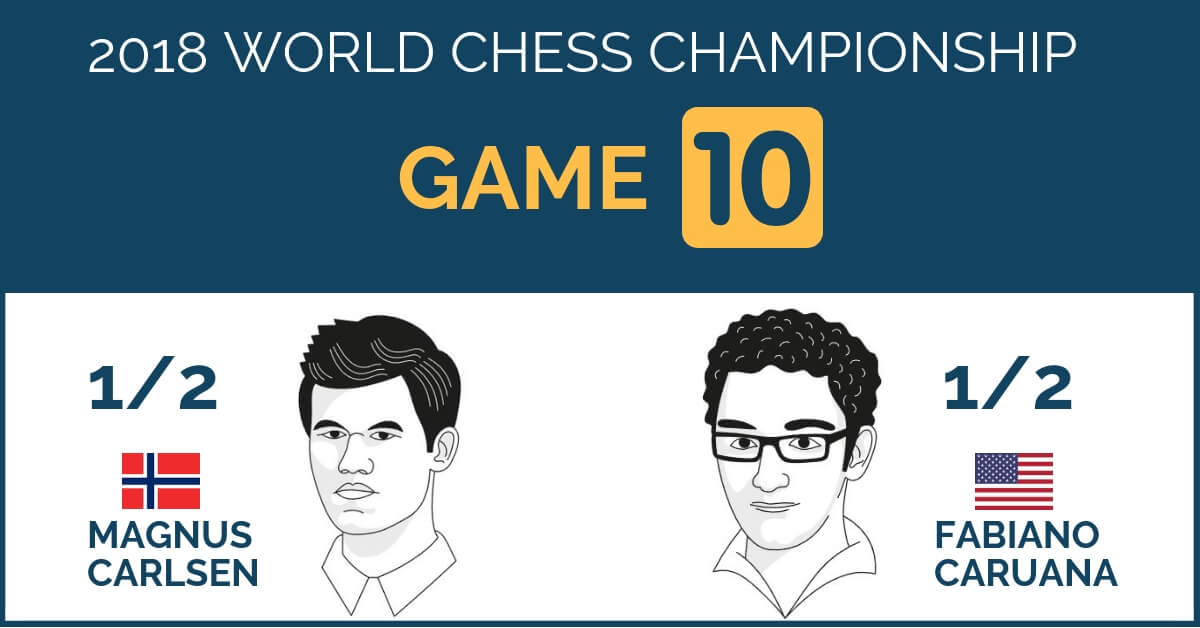 Game 10 turned out to be one of the most entertaining so far in the match. Tom Hollander, the famous English actor, was the honored guest for the First Move today. Once again Carlsen has replied 1…c5. You have to give him credit for this, although many think it does not suit his style he is insisting with the Sicilian.

Caruana went for the main lines again after that almost bring him victory in game 8.

Everyone wanted to see what will be the improvement from the World Champion but it was white who made the novelty.

After Fabiano Caruana’s 12.b4, Magnus Carlsen kept the ultimate poker face for a few minutes.

Both players have made few normal looking moves and then Caruana made a strange move Ra3. This allowed black to create initiative by pushing the central pawns.

Then it was Magnus turn to make a mistake Qg5 giving the b pawn was played.

But Caruana didn’t dare to take it and black kept their advantage.

Although the white position looked scary they managed to defend and reach once again the endgame, like most of the times in this match slightly better for black.

But then again the Champion has made a mistake Kd4.

All of a sudden it’s Carlsen that has to be accurate to make the draw.

Caruana plays the crucial move 45. Rb5! and now he is pressing!

Still black managed to swap some pawns and reach rook endgame 3 against 2. It is a bit odd that Caruana did not even try to win it so it is 5-5 now.

I think it was a case of too complicated and too much at stake. I think I could’ve played better. I felt I had a promising attack, but there were probably many improvements for both. Then I almost lost the game in the end… The problem is if I don’t mate him I am losing. ”

Carlsen says he would prefer to have a longer match, like 16 or 18 games. Carlsen clearly very tired: “It was an extremely tough day today.”

Today it was a lot of nerves. I spent too much time. Then I was left with indecisiveness and couldn’t decide whether to play it safe. Then it was something in the middle that didn’t quite work. I didn’t play like someone who has been in several WC matches before.

Carlsen admits with a big smile on his face that he was afraid of losing today:

It was clearly too complicated and too much was at stake. The whole game is full of nerves. Thankfully I didn’t lose it. Now it’s status quo, so I will hopefully have a good rest day tomorrow and try to strike back. Ai, ai, ai – what a day!

Caruana said I thought I was a bit better but then it was nothing. I have missed Qe2 and after that, I was struggling but still, it is a draw. I can’t say I was scared but rather he will not attack my king. On the other hand, I knew if I refute the attack I can win. I wish I played f3 instead of g3. So I thought I believe in my position. The rook endgame is a dead draw so I did not feel I want to play it.

Giri: “It’s like the endgame god is faltering here…”

Grischuk says Caruana sometimes does very badly in rapid & blitz because when he starts losing he tends to switch to bad openings – but of course in a World Championship tiebreak he won’t do that.

Giri on a wild Grischuk theory as to why Magnus is taking some risks now: “I always like the idea that Magnus is a God and everything happens because he wants it to happen, but this is a bit too much!”

Giri: “Who is your favourite if the match goes to tiebreaks?”

Grischuk: “You can beat Magnus – that’s perfectly possible – but you can never be a favourite against him.”

The last 2 games should be very interesting now.

Today in Russia was the final game in the Women’s World Championship match. The current Champion Ju Jeinun managed to win with black against C. Lagno and force a tie-break. The match is 2-2.