My Chess Story – How to improve your chess?

Hello there are thanks for visiting our site,

At first, I was quite weak chess player myself. My Elo rating was just under 1200… I played tournaments and wondered why I lose a game after game.

I tried to improve very hard. I followed every reasonable study plan and advice, bought many books and dived into studying. I’ve spent months trying to understand certain openings and middlegame ideas from greatest players of the past.

On top of that, I played over-the-board against stronger opponents, on the bi-weekly basis. After a year of such training, I only gained about 50 ELO points.

I was stunned. I could not believe it will take that much effort to improve. I felt I was doing something wrong.

And I was right. As Albert Einstein puts it

Insanity is doing the same thing over and over again and expecting different results.

I needed some change…

I tweaked my training routine and got rid of some useless and time-consuming elements, focusing on what I actually needed to win games. I stopped studying openings and focused primarily on attacking chess, deeper endgame understanding, and the right type of tactics, common at practical chess.

The results were simply phenomenal.

By spending almost 5 times fewer hours/week on chess than a year before, I was able to pick up spectacular 500 Elo points, instead of modest 50 points a year before.

My studying/rating gaining efficiency went up by as much as 2500%! I was ranked a number 1 player in the state by the number of Elo points gained in a year span.

Players, who used to crush me with ease, were now terrified to face me over-the-board. They were simply out of my league.

By working another year on chess, using similar training routine, I was able to gain another 300 ELO points, becoming one of the highest ranked chess players in my state.

I went from losing games against 1200-1300 rated opponents to holding my grounds and even beating FIDE masters (2200+) in less than 2 years!

Here is proof, check out this [annotated] game I have played against 2250 ELO rated guy.

The System was actually rather simple…

How did I go from losing to sub-1200 players to beating experts and even Masters in less than 2 years? The systematic training is the key.

The majority of chess players simply train here-and-there, without following any sort of system. That’s why they often get disappointed with their results, or lack of thereof.

You ask me what about the openings? Yes, I did do study the openings from time to time, but before reaching certain level probably around 1800 you don’t need to work on those too much.

This simple plan should be enough to get you started… 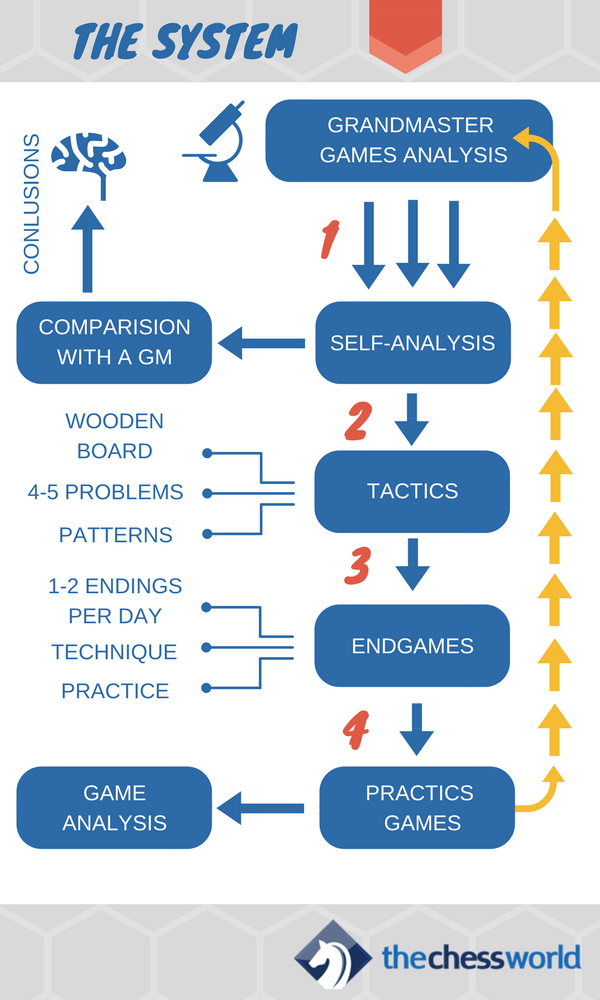 From that time a lot of things have happened.

I’m sure that you are capable of everything, you just need to commit yourself. And with our help, you will make progress even faster, guaranteed!

Thanks for reading this!

Join the FREE Road to 2200 Masterclass (and learn how to Attack Like a Chess Master)
We value your privacy
Supercharge Your Chess in 21 Days!
Join Academy Today!