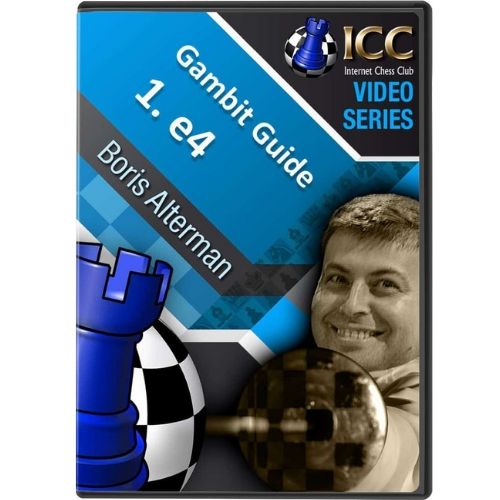 GM Boris Alterman reveals the tricks, tactics and winning ideas behind all gambits beginning 1.e4. If you’re looking to have more fun from your chess games and create more memorable games, start adding some gambits into your opening repertoire!

Chess Gambits in the Opening After 1.e4 – GM Boris Alterman

If you’re looking to have more fun from your chess games and create more memorable games, start adding some gambits into your opening repertoire!

Played for 100s of years, chess gambits are openings which deliberately give up a pawn (or more) too rapidly develop their pieces, start an attack and destroy the opponent in record time.

The late 1800s saw the rise of the ‘Romantic’ school of chess where swashbuckling attacks and killer sacrifices were the norms.

Heroes such as Adolf Anderssen and Paul Morphy created some of the most loved games of all time (the Evergreen Game and the Immortal Game).

Fast-forward to the 1960s and World Champions Tal and Spassky shocked their rivals by daring to play gambits – both had great success.

Nowadays, most club players follow the elite GMs in their choice of openings which means gambits are played less often. However, they are no less dangerous, indeed new ideas are being found all the time.

You can imagine what happens when a club player studies gambits in-depth then unleashes them in tournament play. Their unprepared opponents get torn apart. That’s why gambits are now not just the most fun way to play, they’re the most effective way to win too.

Boris Alterman is an Israeli chess Grandmaster, FIDE Senior Trainer (2010), and also an advisor of the Junior chess program.

This isn’t just memorization of moves either. You’ll learn how to stay one step ahead against any of your opponent’s plans, the dangers you have to be aware of, all the killer attacking formations you need to know and you get to see how Kasparov, Tal, and Morphy solved attacking decisions at the board.

As well as giving you the most aggressive opening repertoire around, Alterman’s chess openings Gambits Guide also teaches you how to make the most of the middlegame positions. GM Alterman’s focus on explaining the ideas not just dictating moves makes the material easy to learn and remember.

GM Boris Alterman begins a two video series investigating perhaps one of the soundest of the romantic chess opening gambits from the 18th century that is still used at the top level in the game today – The Evans Gambit with 1 e4 e5 2 Nf3 Nc6 3 Bc4 Bc5 4 b4!?

Captain William Davies Evans was the captain of a sailing packet carrying mail between Milford Haven and Waterford in Great Briton in the 1820s.

During one of these crossings, the gallant captain suddenly discovered a promising new fourth move for White And so, the Evans Gambit was born coming at the height of the romantic period in the game.

The swashbuckling gambit soon took the imagination of the chess world and was adopted by the likes of McDonnell, Labourdonnais, Anderssen, Morphy, Chigorin, and Steinitz.

However, despite never being refuted, the gambit went out of fashion at the turn of the 20th Century only to come back in dramatic style in 1995, when Garry Kasparov rehabilitated this venerable old gambit.

If you want more wins, whether in tournaments or club chess, seriously consider making the Gambit Guide your new repertoire.