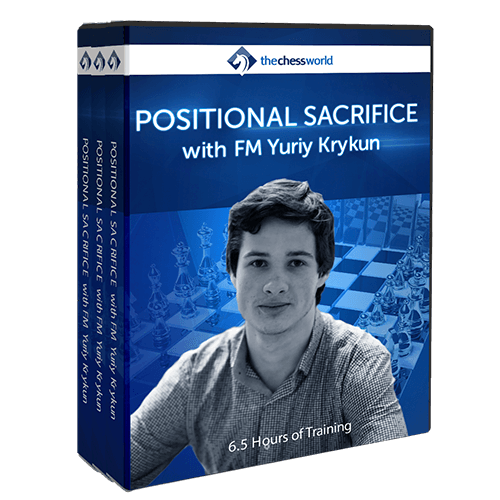 0 Review(s) (0)
$49.95
FM Yuriy Krykun has recorded Positional Sacrifices course, a complete training that teaches you the deeper secrets of positional play through sacrifices and imbalances. You’re learning how to evaluate positional sacrifices and convert the resulting imbalance with flawless technique.
Add To Cart
About the Course Additional Information Reviews (0)
Product Description

Karpov was a master of it. Petrosian made a career out of it.

But most players under 2000 rarely use it… and that’s a big reason why they’re not rated higher.

Learn how to use it properly and you will find breakthroughs where before it felt like you were banging your head against a brick wall.

Every titled player has discovered the secrets of the positional sacrifice… now it’s your turn.

With FM Krykun’s Positional Sacrifice you’ll learn how to disrupt the flow of the game, seizing control with spectacular moves that will send your opponent spinning.

Some of what’s covered:

This is the only training you’ll ever need on this essential advanced topic.

Yuriy has grouped the ideas by sacrifice type and pawn formation so you can see how to take advantage of every opportunity.

And you’re not just learning a few patterns.

You’re learning how the relative strength of the pieces in different positions, plus the technique required to turn your sacrifice into victory.

FM Yuriy Krykun has recorded the Positional Sacrifices course, a complete training that teaches you the deeper secrets of positional play through sacrifices and imbalances. You’re learning how to evaluate positional sacrifices and convert the resulting imbalance with flawless technique.

Downloadable PGNs of the games presented in the course with Master’s analysis, extra lines, and ideas.

Well-structured, practical suggestions only focusing on what really matters

Essential principles, plans, and master-level strategies clearly explained, in an easy-to-understand form that you can apply in your own games starting today!

is a Ukranian FIDE master and member of the National Team with ELO of 2372 and IM norm. He played in many National and International tournaments, winning over 10 medals. Bronze medal winner in European U18 Championship. Full-time chess player, coach, and author of multiple publications.