There are 468 million people that are using Android powered smart-phones in the World in 2011. There is a high chance that many of these millions are occasional chess players, since chess is the most popular over the board game. Laptop may not be always accessible, but what if you want to play chess anyway? If you have an Android capable phone, playing chess on it is not a problem. What android chess program should you choose to spice up your day? If you are curious, read on. I’m certain this review will help you to decide: what is the chess software you really want for your Android phone.

Today I will review an android application called “Chess Free”. Yes, I agree, this maybe not the best name for a chess app for a smart phone, but at least it lets us know that it’s Chess and its quite Free (ad supported). However, if you hate ads as phenomena you may want to switch to the ad-free version, by buying the paid app. The ads in this program are not very annoying and the free version is fully functional, with no limitations whatsoever. 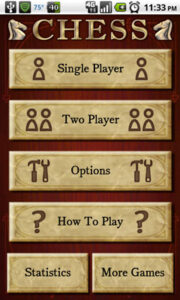 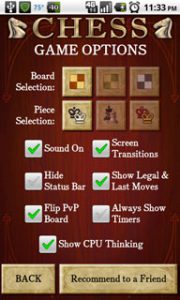 The graphics, sounds and animations of Chess Free are of high quality. You actually get that special feel of playing on a luxury wooden board which is nice and catchy. The board size is about right, it doesn’t seem too small and all the pieces are clearly visible and movable on my 4” screen. 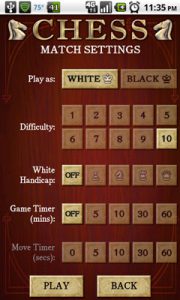 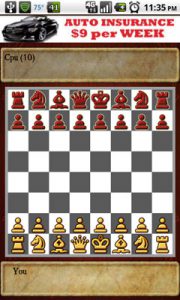 The main menu let you decide whether to play a Single Player game (against the engine) or Two Player game (against another human being next to you). If you click options you can customize the board by changing the board type, pieces type and various “in game” options like sound, legal moves, CPU thinking, etc. Then when you finally decide with the settings you can go on and start a Single Player game. In the Match Settings you can choose a color, difficulty level from 1 to 10, handicap (meaning that CPU will play material down) and timer. Finally, when you done with all the options and settings (it’s quiet quick, easy and straightforward) you can enjoy a game of chess on your phone. 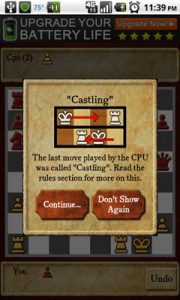 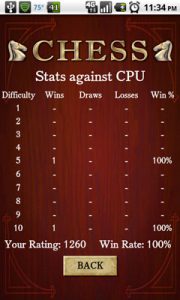 A cool thing about Chess Free is that during a game it actually shows you the candidate moves computer wants to play. It’s not new for programs like Chess Master 10 and Frits to show thinking lines but for a mobile chess it’s pretty new. According to the developer, the engine imitates human’s style of playing chess and isn’t playing like a regular computer. It quite true and the engine have some human-like features such as playing stronger when losing and keeping on the material. I think developers did a good job humanizing the engine. In my opinion, the program Chess Free is mostly aimed for a beginners and novice players. When computer castles, the pop up come up and warn you about the legality of such a move. I played the program twice (as you can see from the statistics vs. CPU) and won both times.

The CPU on level 10 doesn’t play stronger than 1400-1500 ELO, even though I was running it on a powerful 2 core, 1 GHz android smart-phone. There is a plenty of space for performance improvement. The program lacks some important options like saving the game into pgn-file and computer analyzes mode. Free Chess for android only remembers the game you playing, once you done with it it’s lost forever, if you manually don’t write the moves down. You can however view the game after you play it, but cannot save it. Another disadvantage I have encountered while playing Chess Free on level 10 is that it takes sometimes 45+ seconds on a very obvious move. It’s pretty annoying since you need to wait all that time and the game that should have ended 10 minutes ago is still going. Maybe it’s considered to be a part a human-like playing style by a developer too, or maybe just some technical issues that needs to be fixed.

Here is the game I have played for testing purposes against Chess Free on the hardest 10th level:

Chess Free is a very good choice for beginners and players who do not demand computer analyzes, saving/loading game and are okay with computer being around 1400-1500 ELO. It also a good chess program for players, who just want to enjoy a game of chess once in a while and don’t care very much about advanced things.

You can download the Chess Free from Android Market or can scan the QR-code below with your phone:

Hi there, I enjoy reading all of your article.
I like to write a little comment to support you.

Well that’s any chess program. They will also allow you to undo. Say, in Chess Master 10 you can “match” with no undos. Bit, in training mode you can take back moves. If you won a program with take backs it doesn’t count as a true win.

My only problem with this game is the unlimited undo feature. My nephew told me about the game and how he beat level 9 now I struggled with 8+ and I know he can’t beat me. Turns out he used undo to go back five or so moves at a time. I think maybe the undo feature should be limited by level as mistakes are part of the game. Other than that it’s probably the best I’ve played. The intent moves add a more human like feel by mimicking when you’re reading your opponent’s eyes and gives you insight on the attack plan if play a few moves ahead.

It’s a thought. If a computer plays slower moves it seems more “human-like”. But again, if the computer stacks in the middle of game for a good few minutes like this program does, I think it’s a disadvantage (or at least it needs to be controlled somehow).

I would love *all* chess software to have a “slow” down function, i.e. to take a few seconds before making the computer’s move. That takes off part of the psychological stress of the game against the machine. For me, this is a definite “pro”, not a “con” (although it is not optonal).