10 Tips to Fix Your Chess Tactics 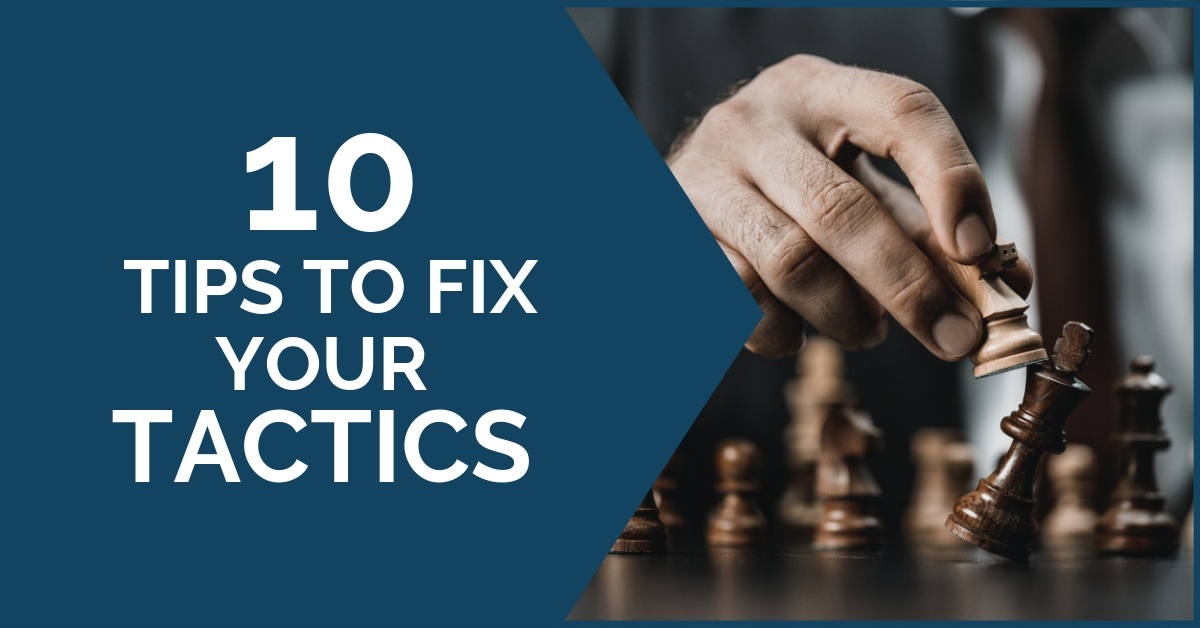 Tactics are one of the most important aspects of the chess game, no doubt. A good tactical vision, an eye for tricks, imagination together with the ability to calculate are qualities desired by every chess player. The general thought among club players is that this ability (the sense for tactics) is more or less natural and you either have it or you don’t. There is some truth in this; however, natural born tacticians are few and most of us mere mortal players can learn, then train and become better at it. In this article we will give you 10 (!) training tips to help you improve your tactical vision regardless of your level.

Key concepts such as “pin”, “back rank weakness”, “LPDO” – John Nunn’s lose pieces drop off – meaning that whenever there are one or more pieces undefended they could be exposed to tactical blows. There are many more tactical motifs that are well known, the more themes you learn the better.

Combinations are somehow “theoretical”. They are patterns repeating over and over again and all that changes are the details around.

How to do this?

There are plenty of books; before you start doing we recommend you watch and learn. Imitation works. Sorcerer’s Apprentice is a great book to learn from. David Bronstein was a player with an exquisite tactical sense.

Tactics are magic, you have to believe you can make them work. Ignore a threat creating a hidden counter-attack, sacrifice a piece for initiative and the promise that it will pay off; you have to believe. Solving studies is a great way of using your imagination in chess, but we are aware that to a club player this is a tiresome and dull activity.

Fortunately, the magician of Riga left an invaluable legacy and his games are the best way to learn and let your mind fly.

Yes, the most standard recommendation. To solve puzzles; the more the better. Too much is never enough.

This is a hard truth, many people are saying it but fewer are actually doing it.

A good amount of time-solving puzzles online or from a book and your tactics will be improved 100%. You will not only learn combination patterns but also train your calculation skills.

Tips of Chess Tactics 5. Do not avoid them unnecessarily

Many club players think they can do without tactics, constantly avoiding whatever choice in their game can lead to a scramble. How can you make progress then? Embrace it, be open to tactical play. Engage in a double-edged situation when the position demands it.

Here we want to draw a line and advice you do other kinds of training techniques which are not necessarily under the category of “tactics” but they go together. The ability to calculate well or at least to a decent standard.

This will help with visualization.

Go through games in magazines or books without moving the pieces, for as long as you can visualize the exact position without errors.

Then when you feel you can’t go one more move further set the position you have in your mind on the board, take a look and go on.

This is just one of the ways but there are others, like playing variations of the game without moving the pieces, playing friendly games without the board and so on.

Most people are able to calculate a variation if we give them enough time to think. The real deal is to do it under pressure with a clock ticking. A limited amount of blitz and rapid games certainly will speed up your thinking.

Tips of Chess Tactics 8. Puzzles with a time limit

Put yourself a challenging time margin to solve a position and consider it a failure if you can’t solve it under the estimated time. Try to improve it gradually by reducing the time needed.

Tips of Chess Tactics 9. Puzzles do not have an expiration date

Most people think that because they have already solved a puzzle book, that is already done. Try doing it all again, you’d be surprised how it is still challenging and even more useful. A second look is always more complete.

Tips of Chess Tactics 10. Think active! All the time

Last but not least we want to mention the important mindset of thinking active, not only on your turn but also on your opponent’s move. Look for threats, moves that disturb the normal character of the position. Unexpected pawn ruptures, even if it costs material. It is important to consider moves that look suspicious but we are too lazy to think about it deeply.

With this, we finish this guideline to improving your tactics. We hope you have enjoyed reading and if you have other methods feel free to share them with us.

Ready to start winning games with chess tactics? Check out our store and articles: