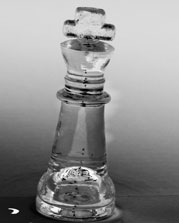 Ask the average adult if chess is cool and they’d probably say, “No way!” Ask the average young child and I’ll bet they’ll give you a different answer – “Chess is way cool!” Children don’t seem to know that chess is considered “geeky” by some.

Don’t believe me? Try an experiment. Put out two chess sets in a lunchroom or other kid central location and step back. See what happens. It’s been my experience that children will flock to the boards. They love the game.

My husband and I fell in love at a chess tournament. Chess had always been a part of our lives. When we had our first child I decided to start teaching him early on.

I wondered how he would respond to the game. I realized that how I introduced the game to my son would dictate his response. I took it slow, realizing it was my job to make chess cool for him!

He took to it quickly and we had a lot of fun. Soon his friends wanted lessons and other parents began asking us to teach their children. I worked on fine tuning my techniques so that they would work for all children, of any age.

I went into the preschool at my children’s school and worked on finding ways to teach two- and three-year-olds to play. Most of the kids loved the lessons but one little boy didn’t show any interest at first. I was working on showing him how the rook moved. He’d just watch me and decline to move the piece himself.

So, how did I make chess cool for this boy? I am not one to give up easily.

I thought back to what my son loved most at age two. Trains! I asked him if he liked Thomas train and his eyes lit up. “Yes, I love Thomas and Percy and…” Well we had a fine discussion about all the trains. I was so happy I knew them all.

“You know,” I told him. “The rook moves like a train on a chess board!” Well, now he was interested. In fact I had trouble ending the lesson. He wanted to move all the rooks on the board (naming each after ones from the Thomas train story).

It’s always the teacher’s job to make any subject fun and cool. Chess is no different. As long as you teach at the right speed and level for the child in front of you, and keep things fun, your child will love chess and reap the rewards that this game has to offer.

Chess for kids is good. It makes them to think which is good by itself. Period.

And it is cool too.

Wow, that’s great! What a treat for both of you. Thank you for sharing your story!

Wow, 2-3 times a week is a lot of chess practice, she must progress quickly. I assume it’s mostly blitz 🙂

I take my 4 year old daughter to a coffee shop 2 to 3 times a week to play chess and have since she was 3. Love it!

I did the chess thing with my kids too. Kids love it!

I think the Knight’s Tour could be a good way to get familiar with the knight’s movements, even if they didn’t complete the complex puzzle.

On a side note, I got to see Kolty give the Knight’s Tour in San Francisco many years ago. He allowed me to pick a square and put my name on it. I selected e4! 🙂

(For those who don’t know, George Koltanowski would do the Knight’s Tour blindfolded asking audience members to write something on each of the 64 squares. After studying the giant filled in board for only a few minutes, he’d perform the Knight’s Tour, calling out the exact contents of every square perfectly.)

The knight tour sounds awesome! I’ll have to try that some time!

[quote name=”Laura Sherman”]Sonya, that’s is wonderful to hear!! There are a lot of fun games around naming pieces and placing them on the board, which we discuss in Chess Is Child’s Play. Children love these exercises!

Your 4 year old is at the perfect age to learn. Have FUN![/quote]

That’s a good suggestion. I think another useful exercise for kids (maybe a little older ones) will be the “knight tour”. That is take a knight, put it on an empty chess board and try to go through all the squares just once. After stepping on a square you can mark the used square with a little sticky note. It is pretty difficult task, so at first kids will skip some squares. Then you can make the task a little easier by allowing stepping on the squares twice, etc.

Sonya, that’s is wonderful to hear!! There are a lot of fun games around naming pieces and placing them on the board, which we discuss in Chess Is Child’s Play. Children love these exercises!

Your 4 year old is at the perfect age to learn. Have FUN!

I think Chess is way cool! I played competitively in high school, and now that I have children of my own I am very excited to teach them the game. I think it is awesome that you’ve worked with 2 and 3 year olds. I’ve started recently with my two year old just naming the pieces with her. She loves it! And my 4 year old is excited to learn also.

I would try giving your son a choice to make about that. For example, he can choose to brush his teeth consistently, or you’ll stop buying/giving him sweets/dessert. A good book on parenting is ScreamFree Parenting. I’m about halfway finished reading it right now and found it very helpful!

What a great story! Yes, all your need to do is get your child started and they will learn by playing and playing.

Thanks for writing in!

I never played chess, still don’t. But a relative taught my son when he was 6 and we were off!! At 7 he began attending a chess club at our local library and was the only one under 25 in the group, they accepted him without question and nurtured his interest. At around age 8 we began doing scholastic tournaments and he absolutely LIVED for them. It even grew into a job. At 13 he was hired by a local chess teacher to be an assistant teaching at local elementary schools in their after school programs. We had the time of our lives going to those tournaments. Simply introducing your children to chess is all you need, their natural curiosity takes over from there. Now getting him to quit playing chess and go to bed at night was an entirely different matter 🙂

Dave, thank you for your vote of confidence! Actually interesting children in chess really isn’t challenging at all (much easier than getting them interested in dental hygiene). With our book, Chess Is Child’s Play, I wanted to help all parents find the joy in teaching their children to play chess at any age. (PS: You could always try, “Brush your teeth and then we’ll play a game of chess together!”)

Laura, I would like to have you come over to my place and help my wife and I get our 10-yr old son to brush his teeth. If you can get kids that age interested in chess, I think you can handle any challenge we have in our household!