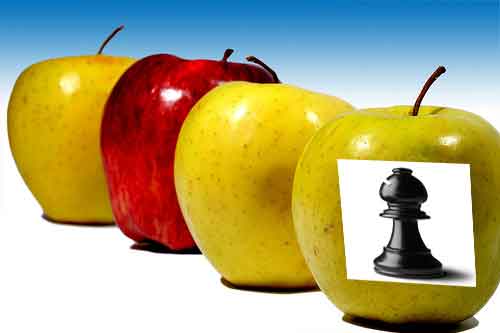 Food intake before the chess game is absolutely crucial factor of a competition. All food consumed approximately two hours before the round kicks off will affect how well player feels and performs during the game. Eating too much, too little or simply a wrong type of food can significantly low down player’s position in tournament standing. Nearly all nutrition professionals agree that food rich with fish oil is especially beneficial for chess player’s brain. Skolnik, a professional sport’s nutritionist, states that “there is an of the chart upward trend in use of fish oil by athletes and non-athletes alike” (Klein, Grandmaster Diet, 21).

It’s believed that Japanese have higher IQs because of regular seafood consumption, rich with food oils (Klein, Grandmaster Diet, 21). Kelly A. Hammer, healthy food expert, recommends a high protein and high carbonate meals before the chess competition begins. “The carbs will help sustain the focus, while the protein will add to the needed nutrients for brain connections”, Hammer says (Klein, Grandmaster Diet, 21). In order to get enough carbohydrates it’s suggested to consume plenty of fruits and vegetables, potatoes and rice. Food like eggs, chicken, nuts, milk and soy are high on proteins and recommended as a part of chess diet by many nutrition professionals. From my personal experience consuming foods like pork, beef, hamburgers and French fries is not recommended before any intensive mental or physical task. Digesting of these foods takes up a lot of energy making it almost impossible to concentrate and stay focused for long periods of time. After eating these foods a player would be more likely to take a nap, than to play a tough game. As a rule of thumb, consuming too much of any food before a chess game isn’t a good idea because player’s stomach will do all the work and not his brain.

Not eating enough is also a bad practice. Grandmaster Evgeny Bareev advised to be hungry before the game: “Your head is really clear, you can calculate variations and you are aggressive” – he said. Many players including myself tried it and it’s actually not a very good idea. Grandmaster Gregory Serper comments that it’s almost impossible to stay even close to focused when hungry: “all you can think is food” (Klein, Grandmaster Diet, 22). There should be a compromise between how much food is too much and how much is not enough in order to play best possible chess. This balance is individual thing which needs to be developed by the player himself or with a help of qualified nutritionist.

Food intake during the chess game itself plays even more significant role in competition. Not only an opponent gets annoyed when somebody periodically opens up a battle of water or clears a second banana in a row, but there are also real advantages of having access to food during a game. If you take a look at any chess tournament hall you will see that most of the tables have water on it. Water is the most essential part of player’s food ration during a game. According to Kelly Hammer, a professional sports nutritionist, “not drinking enough [water] during a game increases prevalence of fatigue, headaches and low blood pressure which may negatively affect the results” (Klein, Grandmaster Diet, 22). There is a debate going on about sports drinks.

Kansas City Chef’s sports dietitian, Mitzi Dulan, suggests drinking sports drinks such as Gatorade and Powerade during chess events because people drink more of these drinks than regular water (Klein, Grandmaster Diet, 22). Hammer argues that chess isn’t an endurance sport so sports drinks should not substitute water (Klein, Grandmaster Diet, 22). From my personal experience I suggest to drink something in between water and sports drink. Caffeine free iced tea works the best for me since it dehydrates, supplies with carbohydrates and puts some taste in a mouth at the same time.

Another hot topic is caffeine. Skolnik thinks, “caffeine is an individual thing” (Klein, Grandmaster Diet, 22). It helps one player to stay alert but the other one can lose concentration and focus because of the drug. I do not trust caffeine during a serious game. One day it can help you to wake up, but another day it can make you sleepy. Consuming caffeine during a game is a gamble: sometime you win, sometime you don’t. That’s why caffeine free drinks are preferred.

Amy Taylor-Brill, healthy food specialist, believes in study that correlates brain activity with protein intake (Klein, Grandmaster Diet, 23). There are plenty of options for during a game snacks: nuts, cheese sticks, sandwiches and tuna are all high on protein. Tiger Woods in his book, How I Play Golf, writes that vitamins B1, B6 and B12 are essential for high accuracy sports (Klein, Grandmaster Diet, 23). Since playing golf and playing chess require similar rate of concentration vitamins play important role in brain activity. It is a good idea to take a big apple or a banana on game with you.

In conclusion, player’s food intake before and during chess tournament can significantly affect player’s performance. Consumption of too much, too little or simply a wrong type of food can dramatically low down player’s position in tournament standing. It is recommended by many food experts to eat meals reach on fish oils before and during the game in order to improve brain performance. Carbohydrates and proteins are also suggested as a part of chess diet. In order to get enough protein it’s suggested to eat eggs, chicken, nuts, milk and soy. Carbohydrates are present in foods such as fruits and vegetables, potatoes and rice. During the tournament it is very important to drink plenty of water or another drink like caffeine free iced tea in order to be properly hydrated. Sports drinks and caffeine drinks must be consumed with caution due to possibility of “double effect”. It’s a good practice to take a big apple or a banana to a game with you. Over the board snacks may include nuts, cheese sticks, sandwiches and tuna. Well balanced chess diet will not make a bad chess player – a good one instantaneously, but it’s something that will give any player a slight edge over the competition.

I will try to address one of the future articles to this theme:)

can you write about foods in a specific order mentioning us what to eat in dinner,breakfast and lunch

Yes Adam, you’re right about that: taking an exam or playing chess are somewhat related, since you have to solve immediate problems over the table in some way or another.

Excellent article, the same applies to eating before a test or exam I think, or competing in any other sport besides of course the sport of organized starvation. 😉