Attack on the King: Race on Opposite Sides of The Board 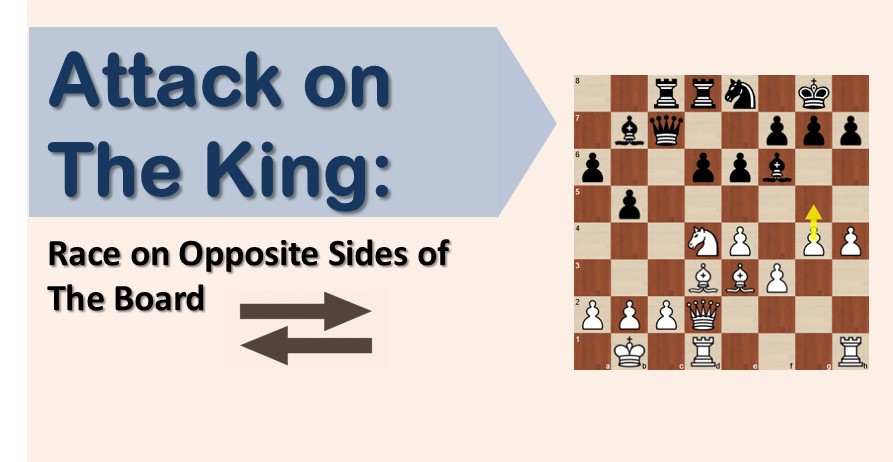 Opposite flank attacks are a common element in chess. In the most popular openings like Sicilian – Najdorf, Classical, or the Dragon, it is very often that white chooses to castle queenside in order to launch an attack against the black king located on the opposite flank.

In such situations, it is very important for both sides to master the art of defending and attacking at the same time. The margin for error is very small and one should not hesitate when it comes to sacrificing material in order to open the files. For this article, we have selected a few examples that will help you understand the tense battle when both sides have the same goal: to destroy the opponent’s castle and checkmate!

Before we move on to the games, it is worth mentioning what are the patterns we should follow in order to succeed when attacking the enemy’s castle.

The following examples will show fierce battles against the kings castled on opposite flanks. We recommend you have a close look at each one of them.

In this first game, between Bologan and Ye, we can see how white applies the ideas mentioned above and does not hesitate to sacrifice a couple of pawns in order to develop his attack. Note how the first sacrifice 19.e5 is done in order to keep the center closed. It’s the key move that allowed white’s attack to succeed.

In the next game, things don’t go very well for white. His project of attacking the kingside was put on hold by a very effective counterplay on the queenside. Just a great display by the former world champion.

We consider the last game we have chose, between Timman and Naiditsch, a very good one. We can see here how Naditsch developed his attack against the white king without wasting any time. He continued by sacrificing material and ignoring white’s threats by creating stronger threats of his own.

We hope that with this article you have enriched your understanding on these attack races on opposite wings. Knowing the patterns will help you save time and make the correct decisions in your games when you’re under such circumstances.

Thanks for letting us know. It was fixed. You need to completely reload the page to see the effect 🙂