In the following position Black has just played ..Rh6. But White is a pawn up and still stands better.

He could have maintained pressure with one or two good moves.

With the clock ticking by and only seconds left he went on to lose. 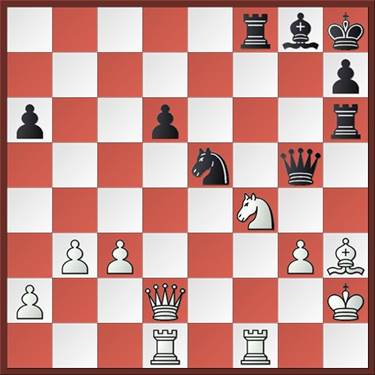 Here is your little challenge.

Take a hard look at the position and answer the questions below:

1) What was the event in which this game was played?

2) Who were the players?

3) What should White have played to consolidate his advantage?

(Allow yourself 10 seconds to decide on a reasonably good move.)

4) What happened in the game?

Surprisingly none of the readers got it right.

1)This game was played in the FIDE Blitz Championship, 2014.

2)The players were Rauf Mamedov (White) and Magnus Carlsen (Black)

3)White should have played Qd4 followed by Kg2 relieving himself of pressure.

In that event he would have prevailed in the long run with his pawn plus and better position.

4)Instead he fell for a devilish trap that Magnus had prepared for him and lost.