I was there when history was made…

Mr. L.P.Khadilkar (1939-) is a senior arbiter who has conducted several tournaments in India and a keen observer of the game. Age has not withered his spirit or dimmed his zest for life.

He happens to be the grand nephew of late Vinayakrao Khadilkar who crossed swords with the likes of Mir Sultan Khan. No wonder, the passion for the game runs in his genes.

Here is his account of the early days of the Match, all told in pictures-Ed.

The moment it was announced that the World Championship would be played in India I was determined to see it. I am in the evening of life. Who knows, I may not bet around when the next Match is played.

Besides, I know Chennai quite well right from old days when it was called Madras. I have been there a number of times for our staff training programmes (I served in Reserve Bank of India) or playing in chess tournaments. I like the city and I don’t mind the heat. The people are warm, that’s what matters.

There was one problem, though. I had to attend to some family matters on 8th November in Pune (where I currently reside, post-retirement). In other words I was going to miss the first game of the Match. Now that was bad. But it could not be helped.

I made my train reservation anyway and contacted our RBI (Reserve Bank of India) Guest House at Chennai for accommodation. The manager first informed me, no suitable room was available, this being the holiday season. I asked him to make do with what was vacant. I would have even slept in a dormitory if that was warranted. Seeing the Match mattered and everything else was secondary. I am sure, all those who came to Chennai to see the Match shared the same enthusiasm and were prepared put up with any inconvenience like me.

I boarded Chennai Mail from Pune late at night (at the ungodly hour of 2 AM!) on 8th instant. Too late to sleep and too early to remain awake. Next morning brought its own surprises in its wake. At Solapur a young man and his friends boarded our compartment. Soon after, the young man was absorbed in a solitaire game on his I-pad. When I gave it a glance, it turned out be chess! 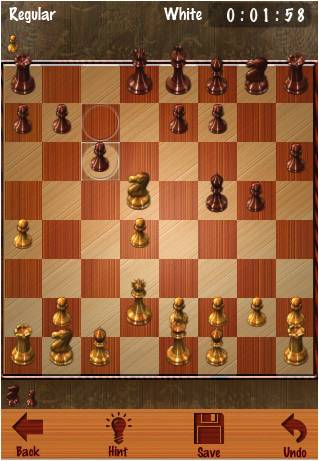 Now chess players all over the world have no hesitation in getting acquainted with others who share their passion. Who else can you talk to, if not a fellow player? So I let out that I too happened to play chess. At once the young man’s eyes lit up and we were soon engaged in a battle that lasted an hour and half. Modesty forbids me to mention who won! Suffice it to say that my young friend gave a good fight. We continued to play for the rest of the day much to the amusement of fellow passengers. My young friend told me, he was going on a pilgrimage to Tirupati.

Well, I was going on a pilgrimage too …!

I do not remember how I slept that night. Next day the train reached Chennai Central station early in the morning (at 4 AM!). 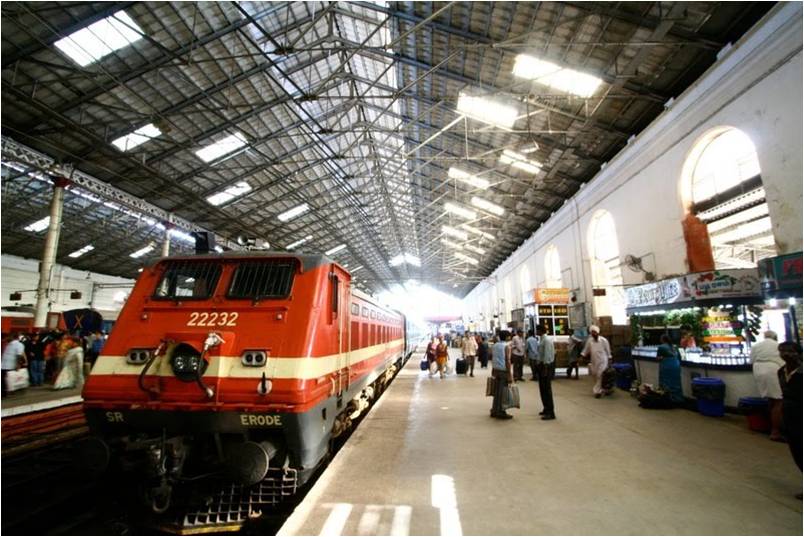 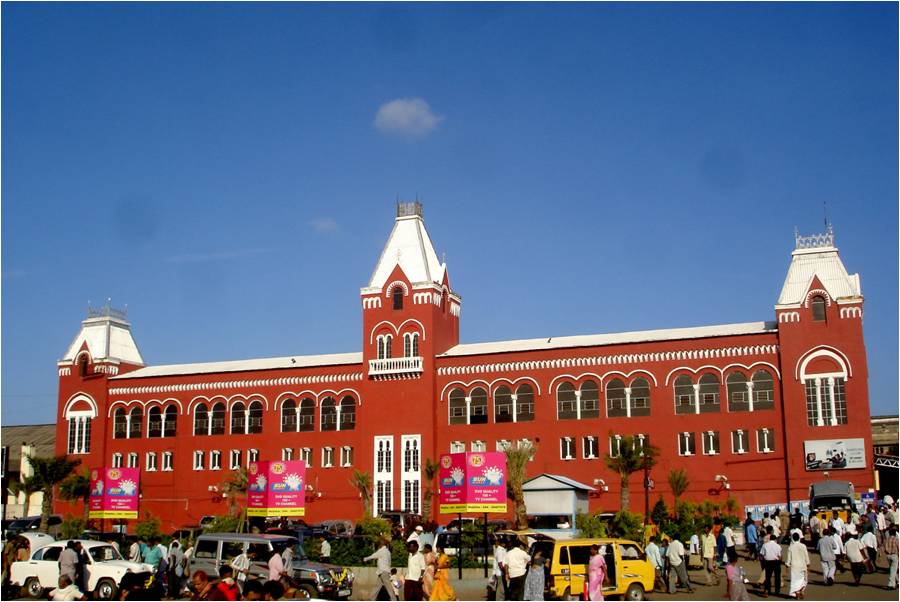 It was still dark outside. So I decided to remain stay put till dawn. I had a cup of coffee and relaxed in the waiting room. When it was broad daylight I went to the Pre-paid cab counter at the station and took a token indicating the fare to be paid for my destination. Then I got into the auto. The Guest House is no more than seven kms from the station and I was there by 6.30 AM. Fortunately, the manager had reserved a comfortable room for me. So I was relieved. I had a nice bath & breakfast and thought about what to do next. An elaborate lunch would take too much time and I still had to reach the venue and buy a ticket for the Match. Finally, I settled down for some nice South Indian fare at Guest Hotel, a nearby restaurant. 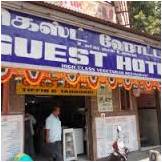 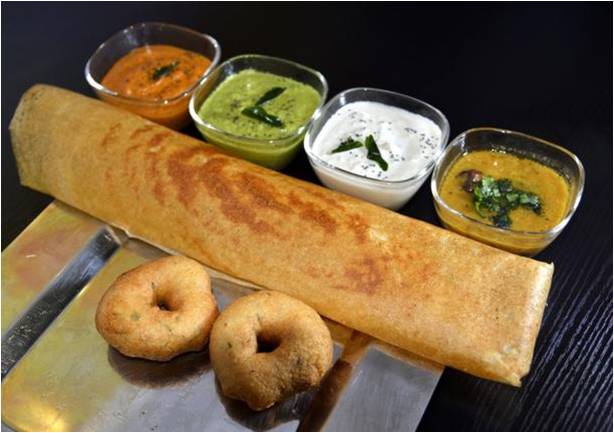 I reached the venue around 12.30 PM. The game was to start at 3 PM. So why was I there so early, you may ask. I have been playing in tournaments for the last 50 years and know many players of my own generation. So my intention in reaching the venue so early was to see if I could meet some of these old friends. As it happened, I ran into a quite a few. I also happened to see several Indian masters and grandmasters jotting notes for their reports on the match for newspapers.

Expectedly, there was a long queue of eager fans, young and old to buy tickets (price ranging from Rs. 2000 to Rs. 2500) I had just bought a ticket and a young reporter from The Times of India, Chennai approached me for a spot interview. My friend R.G. Nargundkar a player from Pune was also with me. So she clicked us both together. We chatted for a few minutes and she went off (presumably in search of more victims!). Next morning my friend and I both figured in her report, courtesy Anand and Carlsen!

At about 2-30 PM after depositing my cell phone with the organizers and after a thorough search by the security, I entered hall. I first saw the stage, it was spacious and well- designed for the Match. The arena was separated from the rest of the hall with a glass partition. It was soundproof (and possibly bullet-proof

). (Later I was to gather that the hall happened to be the ball room of the Hyatt Regency Hotel.)

On both sides of the hall there were large electronic demonstration boards. As soon as either player made a move, it appeared on the board.

The second game was drawn just like the first the day before. So what was happening? Like sumo wrestlers the two players were sizing up each other. 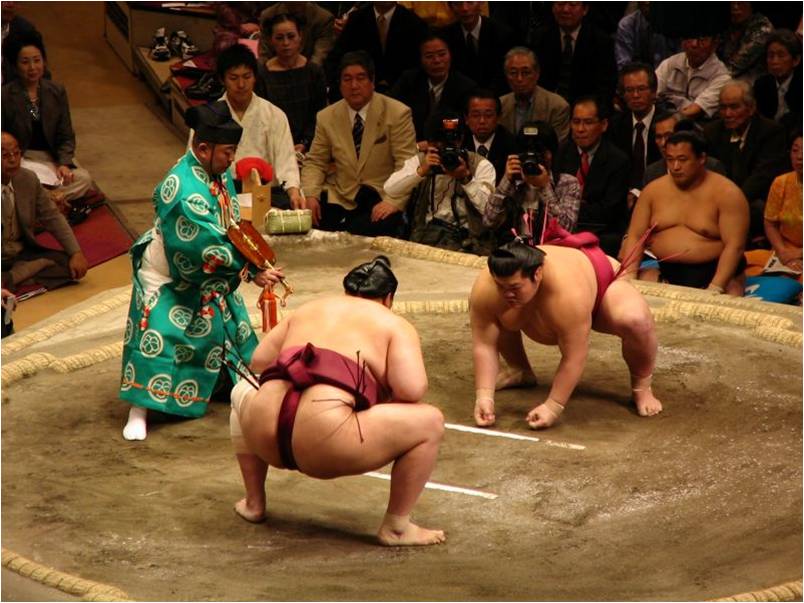 Anyway, the game had finished early and after taking a look at the lobby I went to the first floor. Here I saw a cake shop. Among the delicacies there was a cake shaped like a chess set, quite appropriate for the occasion, I thought. 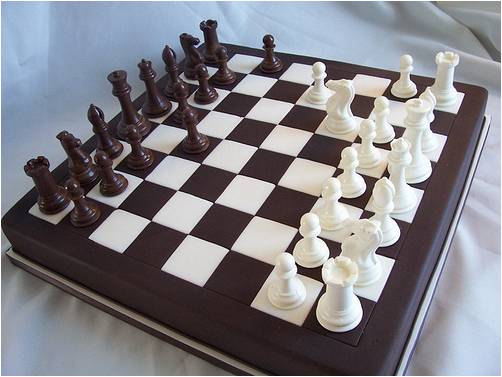 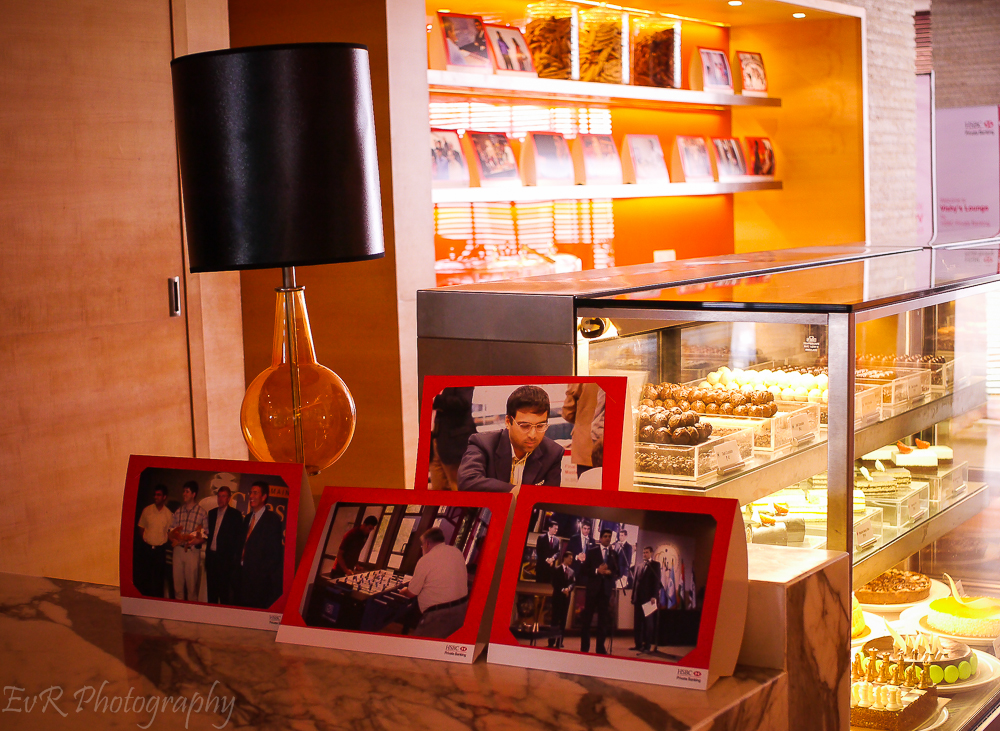 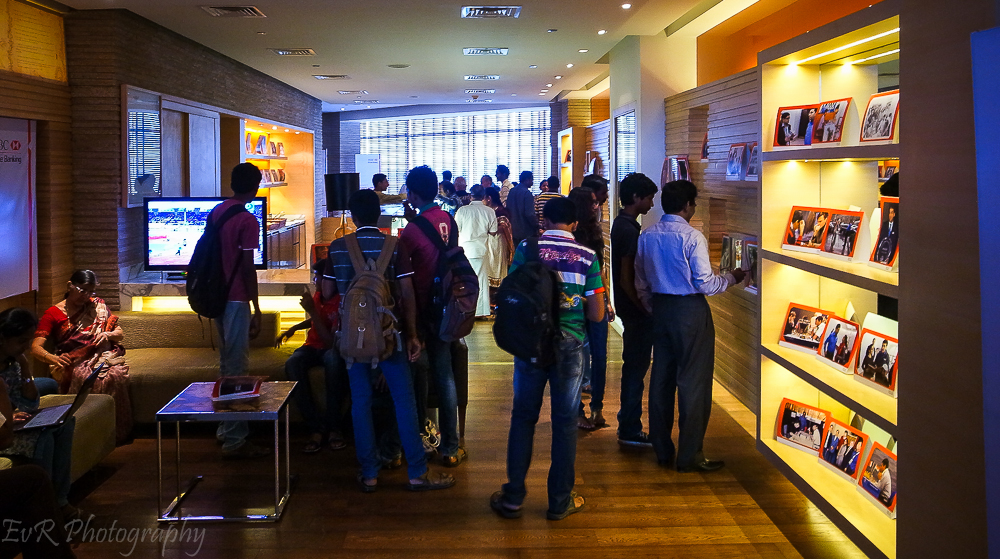 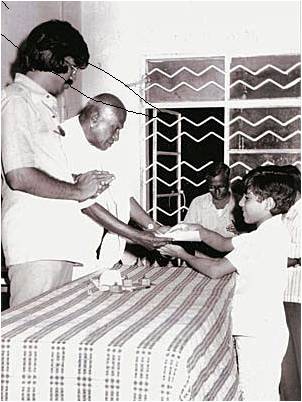 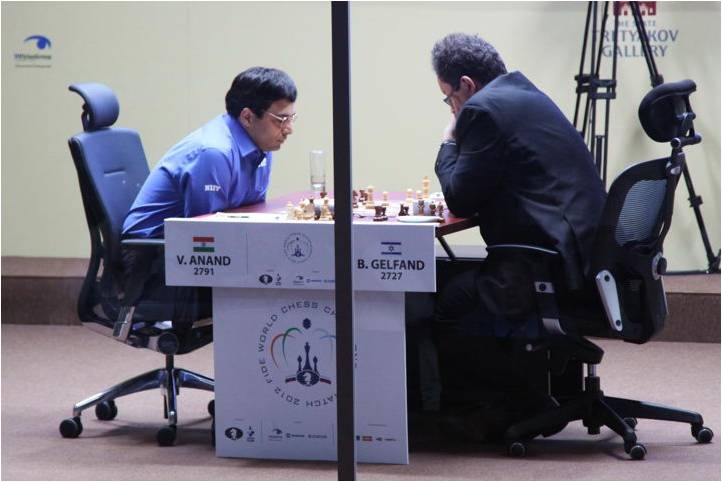 The whole exhibition was a treat to watch.

The lounge on the floor with plastic pieces like large dolls and children had a field day enjoying themselves. 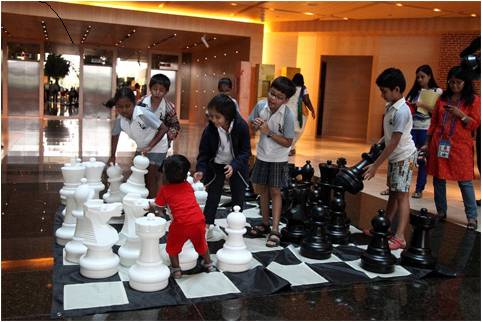 The atmosphere here was quite relaxed and visiting players from abroad seated on sofas were discussing the game just concluded. From their gestures it appeared, they were not impressed by the play so far.

The first floor had the press room and also telecast studio. There were two teams of commentators. The first had GMs, R. B. Ramesh and Susan Polgar. Ramesh kept it sober and Susan made it lively. Both were very knowledgeable and experienced. 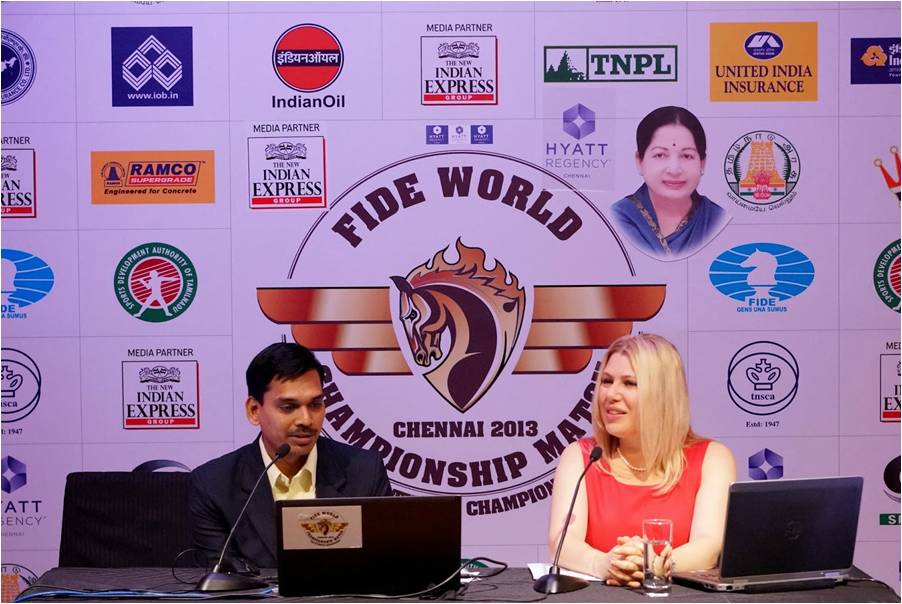 The second team had IMs Lawrence Trent and Tania Sachdev (she is also a WGM). 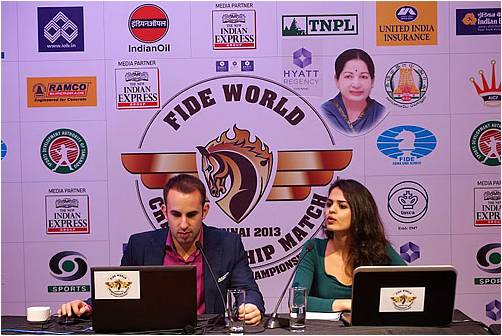 Next day (12th November) the third game was played. Anand had the upper hand here. 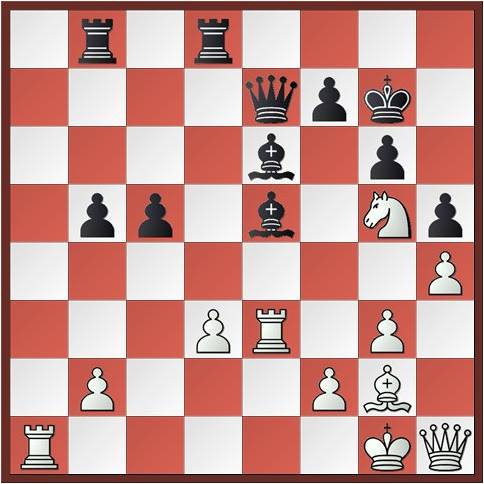 While I was watching the game, I felt, he should have played 29…Bxb2. Instead he chose 29…Bd4. Unfortunately, the attack he planned did not materialize. Subsequently he went for simplification and draw. As a result, he lost an opportunity to put pressure on Carlsen.

Experts are still debating whether he should have taken the pawn on b2 immediately.

Garry Kasparov, I am told, is of a different opinion. According to him that pawn was “dead meat” and Anand missed a promising continuation later. 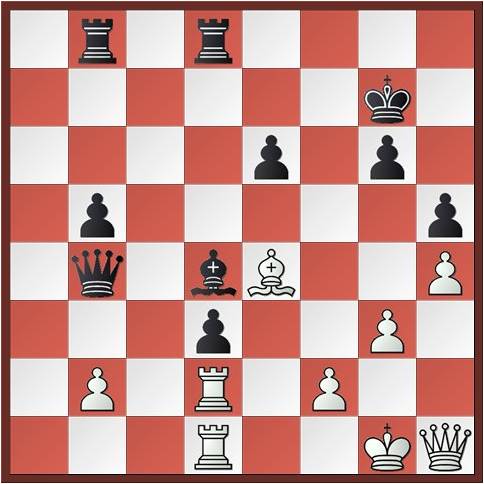 All this only goes to show the incredible complexity of the position.

The next day the fourth game was played. It was a tough draw. As the game finished early, I strolled about in the lobby and the press room when a reporter from The Hindu, the local newspaper accosted me and interviewed me. She wanted to know who was going to win. Now how do you answer that question if you are an Anand fan?

The next day was rest day and alas, duty called. I had to be back home to attend to the same family matters that I mentioned before. So it was with reluctance that I left Chennai and returned to Pune.

The Match, though, continued to absorb my attention till the end. 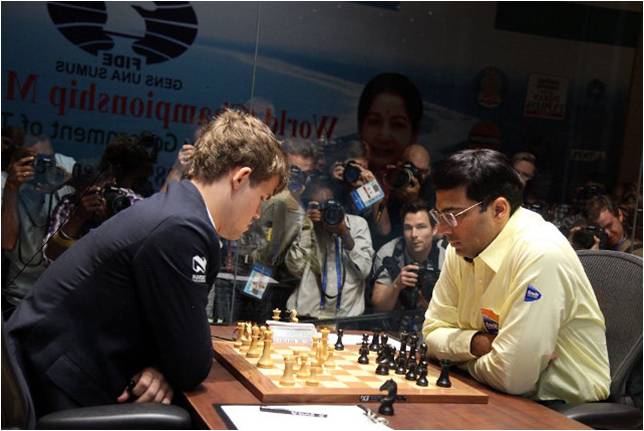 And I was sorry to see Anand lose the title. But then… it needed a Carlsen to wrest it from him.

Credits: Images of the Match are by Ms Anastasiya Karlovich and images of the Exhibition by Eric van Reem. They are taken from ChessBase, Susan Polgar’s Blog Spot, ChessPro.ru and Mate in Chennai:

Other images are from public domain.

Normal 0 false false false EN-US X-NONE X-NONE Microsoft InternetExplorer 4 No wonder, the passion for the game runs in his genes. Here is his account of the early days of the Match, all told in pictures-Ed.

Dear friend,
Thanks for the comment.
We shall inform the author.
He would be glad to know.

I could not resist commenting. Exceptionally well written!

Dear readers,
Mr. L.P.Khadilkar thanks you all for the appreciation.
He has not “spoken” to each of you personally
as he is playing in a tournament
and mobile phones are not allowed in the hall:-)

Kudos to you Khadilkar Sir. I liked your write-up very much. This is far more interesting then those boring articles produced in the news papers.

A very good piece written by L P Khadilkar. Kudos to him!

Great piece! It is really interesting to read about the Match from the perspective of viewer. Great atmosphere!

very nice narration.it wud have been better if u had stayed for the whole match.