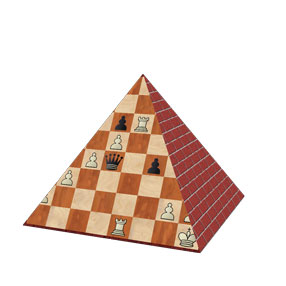 1) Captures: When you capture a piece, the opponent must capture back or else fall behind in material. Therefore, you can use captures to force the opponent’s next move. He probably has to recapture, so you can predict what his next move will be.

2) Checks: When you put the opponent’s king in check, he must get out of check. There will always be a limited number of ways for the opponent to get out of check, so you can predict what his next move will be. Checks are the most powerful forcing moves.

Now that you know what forcing moves are, you can learn about combinations. A combination is a sequence of forcing moves ending with a tactic. It would be nice if all tactics happened in just one move, but chess is not that simple. It usually takes more than one move to do a tactic. This is called a combination.

A combination requires you to think ahead more than one move. You have to say to yourself, “If I do this, and the opponent does that, then what can I do next?” You have to think ahead three or more moves. Then you will be able to find combinations. A combination begins with a sequence of forcing moves to get the pieces into the right position for a tactic. They prepare or setup the tactic. When the pieces are ready, then you can do the tactic.

Tactics are organized into eight related groups, with three tactics in each group. The eight groups of tactics are: direct, dynamic, discovered, double, decoy, deflection, defensive and delay. There are 24 lessons for beginner, intermediate and advanced players that explain each of these tactics.

This is a strong article. John Herron consistently delivers well rounded chess learning advice. That is why I personally use and recommend all students of chess buy, use, and prosper from the articulate wisdom of Total Chess.