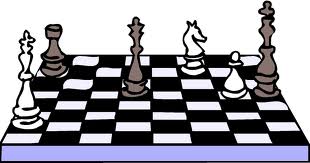 There are three more ways to draw, but they do not happen very often.

They are more common with advanced players than with beginners, and they are more difficult to recognize and harder to decide.

2) Repetition: If at any time during a game the same exact board position occurs three times, and it is the same player’s turn to move each time, then either player can claim a draw. You almost certainly will need a score sheet to prove this, unless it is a simple case of both players moving the same piece back and forth three times.

Usually, the player who is behind in material will want to claim a draw by repetition. If the opponent does not agree that there has been a repetition of the same position three times, then you will have to use your score sheet to replay the game and prove it. If you are not using a scoresheet then you must rely on the fairness and good sportsmanship of the opponent to make your claim. You should always be fair and honest in your decision of whether or not there has been a draw by repetition.

Not every chess game ends with a winner or a loser. There is a third result that is a very important part of the game of chess – the draw…this post has came up with very helpful ways to draw.