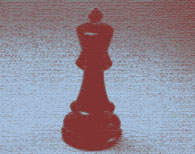 The midgame is the most complicated and difficult part of a chess game. All of the pieces are in play, and there are complex maneuvers and tactical battles. The game sometimes ends in the midgame. There are three main strategies for playing the midgame.

1) Attack: To win a chess game you must attack. If you hang back and let the opponent do all of the attacking, then you will never win. Sooner or later your defenses will crumble and one of the opponent’s attacks will break through and beat you. You must attack to win. Look for weaknesses to attack. It is much easier to attack weaknesses than it is to attack strengths.

2) Defend: Most players like to attack, but do not like to defend. It is more fun and exciting to attack. But you must also defend yourself when the opponent attacks you. If you spend all of your time attacking and no time defending, even a weak attack from the opponent might beat you. You need to balance attacking and defending, and spend some time on each. Sometimes you can do both at the same time, or maybe you can counterattack.

3) Use Tactics: Tactics are the heart of chess. They happen all the time in every game, but mostly in the midgame. You can use tactics in many different ways. One way to use tactics is to win material. When you win material, you have more pieces and more points, and you have a better chance to win the game. You can also use tactics to improve your position or to create weaknesses in the opponent’s position. Tactics are divided into eight groups, with three related tactics in each group.

The best move to find in any chess game is checkmate. No other move is as much fun or as exciting. However, if you are going to find checkmate you must know what to look for.

3) Look for sacrifices: Sacrifices are difficult for beginners to understand. A sacrifice occurs when you give away more than you get back. Why would you want to do that? The answer is you expect to get back even more later. When you are looking for checkmate, look for sacrifices to expose the opponent’s king or to remove some of its defenders. A sacrifice will often put the opponent’s king in more danger than it was in before. You may give away more than you get back, but it will be worth it if you can get checkmate. Make sure that you can force checkmate, though. A sacrifice that does not work is just a give-away.

Thanks for this really important saying

The advice is true in itself but veers towards the obvious! Not much good either without examples!