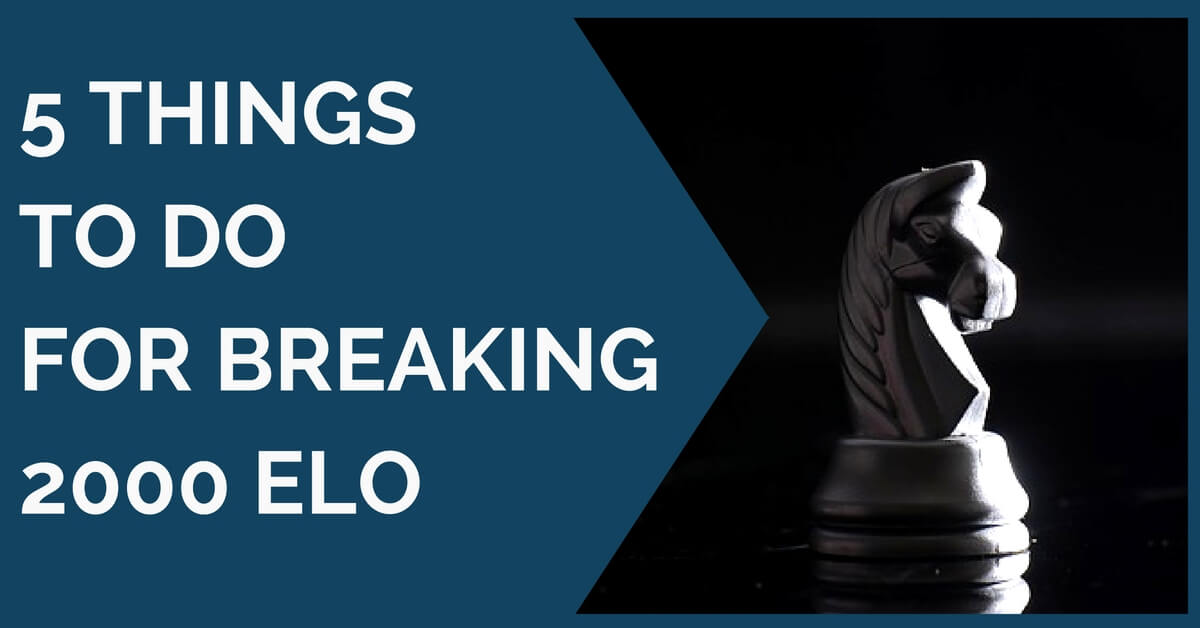 Making steady progress in chess is something every chess player aims for through his whole career no matter what level he is. It is always nice to be improving one’s own weaknesses and therefore become stronger. For advanced players this task is still difficult, but at least they have an idea of what they should be doing.

In this article we are going to talk about training methods for amateurs and what areas are useful to work on in order to reach or pass an ELO of 2000 points. With a limited time to work on chess a beginner can often get stuck at the same level for years, many years. One of the most common bad habits among beginners is playing blitz online for hours as a daily routine.

Blitz is great for many reasons, but, as everything in life, too much of it is definitely counterproductive to your chess learning. Here are 5 tips you can follow in order to make some (quick) drastic change:

Solve tactical exercises in order to obtain a sound combinational vision. Having a sense for tactics can be natural for some players, but for those who can’t immediately spot the tactical themes it can be worked out. At the level we are talking about lots of games are decided tactically, very often we find cases where one side couldn’t materialize an overwhelming positional advantage because his opponent “fooled him with some trick”. So it is essential to sharpen up tactics, avoid hanging pieces, and finally take advantage of your opponent’s tactical mistakes.

Upgrade your chess education by going through the games of strong players; could be of any period. Pay attention to how they follow the basic principles of chess. This is quite important because amateurs very often initiate attacks when the pieces are not fully developed or they lack harmony between them. You must learn to play with all your pieces first before going for “cheap tricks”.

Focus on one system or two with black and white but no more. We would recommend choosing a practical opening that has passed the test of time and that doesn’t depend on theoretical moves too much. For example, the Nimzo-Indian, the Tartakower defenses against 1.d4 instead of Grunfeld or King’s Indian which are more complicated and a lot depends on memory.

However, this actually depends on the qualities of every player and mostly on his style of play. Some players like to play the Benko Gambit and others Queen’s Gambit Accepted. In the end, it is all about style and taste.

Nevertheless, the bottom line is that the simpler and easier to understand the opening, the more time you have to improve in other important areas.

Now this is a highly important point. A well trained player should not suffer time pressure at this level. Some very strong Grandmasters are famous for getting under severe time trouble, with the most notable case being Grischuk. However, he is used to it and he can solve big problems very quickly. His skills are beyond comparison to ours, mere “humans”.

How many times haven’t we seen a low rated player play a great game against a strong opponent and suddenly lose everything when his time runs under 10-5 minutes? Many times. Avoid thinking unnecessarily. If you know the opening moves well, play them without hesitation.

Sometimes club players spend a lot of time in the transition from the opening to the middle game, considering moves of equal value, such as developing moves. One advice is to double check these moves and go ahead using reasonable amount of time, there will be greater decisions to take in the future and you’ll need time then.

By training points 1-2-3 you should become better in making decisions faster.

The last tip is more about things you should not do. It is possible that you have a blitz addiction, as most players do, but this is not an effective way of training and it will later show in over the board games. Blitz will help you train your openings and it is actually fun, but to always be in a rush to make a move will make your thought process very superficial. It is possible that your moves can’t be refuted within the margin of 3-5 minutes, but in classical games you may find out how weak your “blitz” moves are and your opponent will have all the time to refute them.

So our advice is to discipline yourself to a reasonable amount of blitz, if necessary at all. Try to think deep in the middlegame and discover your opponent’s intentions. Interfering with the enemy’s plans is just as important as realizing our own plan.

With this we conclude this article with tips for novice players who do not have plenty of time to work on their chess. As you can see we have not mentioned studying endgames, which is important too. Basic concepts such as rooks behind passed pawns, centralization of the king should also be acknowledged, but we listed what we consider to have the most immediate impact on the game according to our own experience with different students.

Good luck and feel free to comment your thoughts and questions!