How to Deal With Chess Anxieties, Barriers and Obstacles 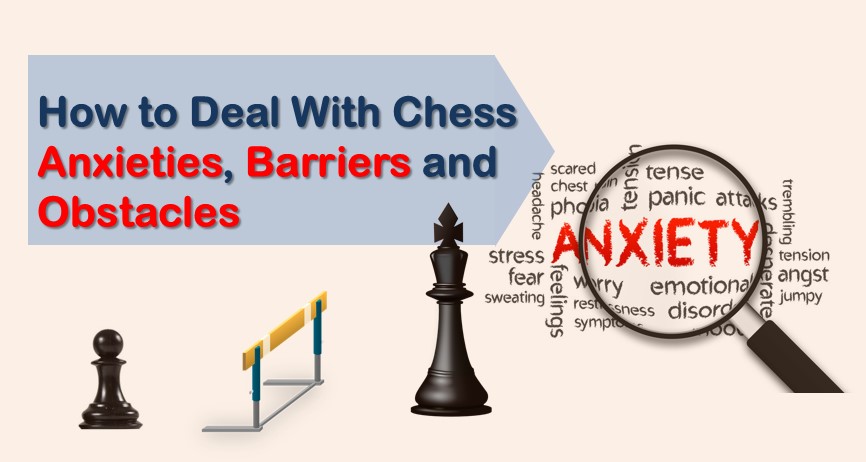 Many chess players ask me the same questions over and over again. The most common questions involve the big 3: anxieties before and during the game, barriers that prevent them from improving at chess and obstacles that disallow focusing on chess, sticking to the plan and reaching the goals. In today’s article you will learn how to deal with these 3 big problems that prevent many chess players from fully enjoying the game and reaching their potential.

1. How to deal with chess anxieties

How many times have you noticed that you are very nervous before or during the game? Generally, stress supposed to help you in performing better, staying alert and focused on a given task.

In chess however, it is not as simple. Many players experience such an extreme level of anxiety before the game, that they “burn out” before the game even begins and become totally reluctant during the game. They focus all their attention on worrying about the outcome of the game, rather than focusing on the game itself. This approach oftentimes leads to series of unforced mistakes, or so-called blunders, and may cost you the game.

Anxiety during the game is far more destructive than the one beforehand. Chess players start triple checking the moves, seeing imaginary threats and even lose common sense. This type of behavior often results in blunders, unsounds sacrifices and miscalculated combinations.

We have proposed one simple, yet very effective method that involves solving simple tactics before an important game to warm up your “chess muscle”, boost your confidence and most importantly to get rid of anxiety. We have discussed many other important things about psychological aspects of chess in the first part of the comprehensive training course. Feel free to read more about it here.

Here are couple things to keep in mind in order to eliminate (or at least greatly reduce) chess anxieties:

– Do solve “warm up” tactics before the game.

– Do not think about the outcome of the game, tournament standings, ratings, prize money or anything else unrelated to the actual position on the board during the game.

2. How to deal with chess barriers

All chess players hit plateau. Some experience it sooner, some later but it is inevitable. This is true not just for chess, but for most other sports as well.

At chess, a player plateaues when he cannot any longer improve his skills and rating regardless of the number of hours spend training. I’m sure you are familiar with this concept if you’ve played chess for long enough. What do you do to pass this barrier and to start improving again?

Here are some recommendations that will help you to pass the barrier:

– Do not keep training the way you usually train. If your current training method does not yield the results you want, it is time to try something else. To make your task easier we have developed a systematic training program which will allow you to pass the plateau and keep improving your game day-after-day.

– If you are already a higher rated player, it may be far more difficult for you to improve rather than for 1200-1800 rated players. Sometimes you will need a coach to guide you through (this is especially true for 2000+ rated players). In that case feel free to click here.

– Sometimes the reason why you’re not improving maybe fairly obvious. For example, you cannot become a FIDE master playing against 1400-1500 rated players. You need to play up against stronger competition to get there. Also you cannot improve your general chess level only by playing blitz games. It won’t help your chess. Options 1 or 2 will do far more good for your game than simply playing games.

3. How to deal with chess obstacles

You may have the best chess training resources in the world, but without appropriate motivation and dedication they won’t do you any good. If you are serious about improving your game you need to find the right resources, allocate time necessary to employ these resources and also to find time to play against real human opponents (preferably slightly stronger ones).

Without all three of these factors being true it would be very hard or even impossible to get better at chess.

Let’s summarize what we have learned today:

1. To deal with chess anxieties:

– Solve simple “warm up” tactics before the game to boost your confidence, to stretch your “chess muscle” and t get rid of stress.

– Avoid thinking about outcome of the game or its consequences during the game.

2. To deal with chess barriers:

– If you hit a plateau, change your training routine.

– If you are a higher rated player (2000+) you should consider getting a professional coach.

– Sometimes the reason you are not improving maybe much simpler than it seems: play against stronger players, do it regularly, stay away from blitz, and make sure to train not just play.

3. To deal with chess obstacles:

– Find time to train and to play.

– Find right resources to use.

– Stay motivated and dedicated. Never give up your dream!