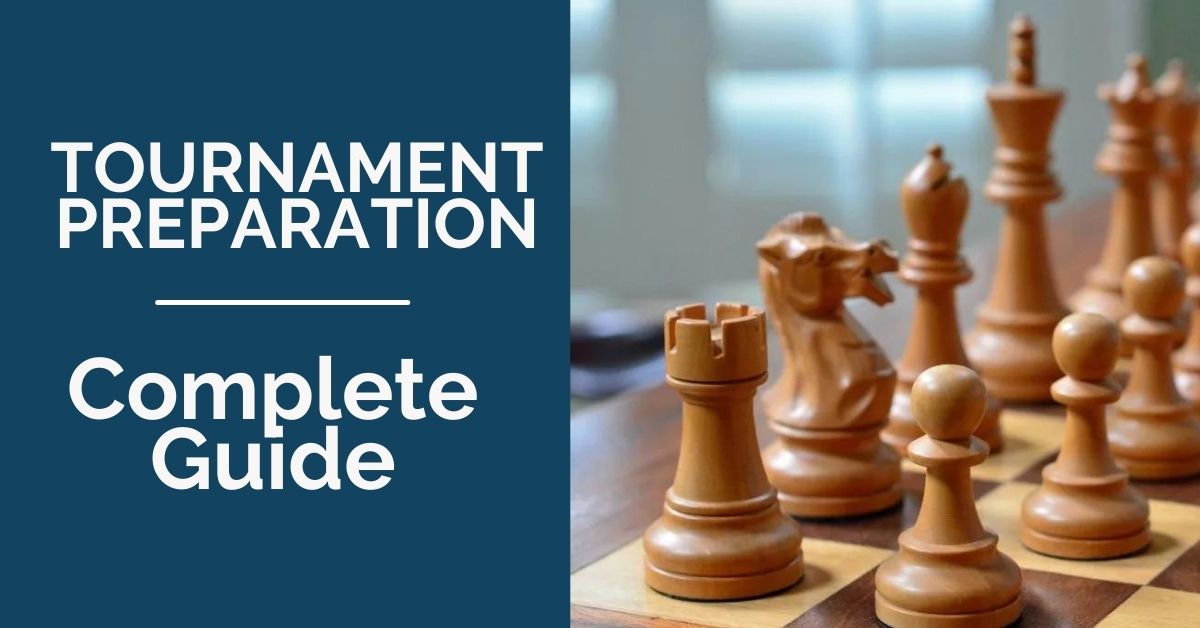 Tournament Preparation: How do you prepare for a tournament? Every chess player hopes to show their best in every game, but more often it happens they perform below their abilities. Why does that happen? There could be many reasons, but most likely they did not do their best before the game started. Confucius said: “Success depends upon previous preparation, and without such preparation, there is sure to be a failure.”

Every professional chess player has their own way of getting ready for an event. In this article, we will break down the most important things that you should consider to perform better in your next tournament. Apart from discussing chess and non-chess practices used by professional players, we will also discuss what is essential to know for those who are planning to play in their first tournament.

How to be in good shape during the tournament?

First, let’s admit there is no clear answer to this question. There are too many things that affect the process of decision-making and the way your brain functions. Many top players say they can never tell if they are in a good shape before the game starts. It usually takes a few first moves and calculated lines for them to answer that question. You can be in a fighting mood and feel great, but still, struggle to calculate variations or make atypically bad decisions when it comes to playing.

Still, certain things can increase the probability of you coming at your best. First of all, let’s discuss the physical shape.

Tournament Preparation: You should sleep well.

In one of his books, Norwegian grandmaster Simen Agdestein wrote about his best student: “Magnus normally needs 10-11 hours of sleep to be in top shape.” Magnus Carlsen himself confirmed the importance of good sleep before the games: he said during the tournaments he sleeps more than usual.

Before entering the tournament, check the playing schedule. Many grandmasters are used to getting up late and therefore, refuse to play in events with early morning rounds. Try to adjust your sleep schedule to the tournament’s requirements in advance. This way you will avoid having issues with that.

Another important thing that strongly affects your well-being and your brain is nutrition. Bad food can make you feel down and lead to fatigue during the game. Moreover, it can negatively affect your sleep. You should eat healthy during the tournament, but figure out what food is good for you in advance.

Different tournaments have different schedules. In some tournaments, you will play one classical game every day, whereas the other tournaments can go with two games a day. In the latter case, it is easy to get tired, because one game can last for 3-4 hours. Such tournaments are more suitable for those who are in good physical shape. The importance of physical shape for chess players was recently shown in the World Championship match 2021. The epic 6th game lasted for almost 8 hours and drained the world title challenger Ian Nepomniachtchi both physically and mentally. He didn’t manage to recover after such a tough game and lost the match. Chess may not seem like that, but it really tests your endurance.

Regarding the chess preparation for tournaments specifically, there are three most important things: solving tactics, opening preparation, and playing training games.

There are different kinds of puzzles to solve, and the players have different preferences about what to do before the games. Some players solve easy tactics on popular websites; others prefer to challenge themselves with hard endgame studies. The general advice would be to solve tactics that are rather easy for you but still, make your brain work. Tactical vision is like a sword that needs to be sharpened before the battle.

Players usually spend most of their time: If you already have an opening repertoire, you should refresh the lines in your memory before playing the tournament. If it is going to be a round-robin event, you will probably know the names of your opponents beforehand. It allows you to look up their games in the database and see what openings they play. You can prepare against these players specifically. But keep in mind they will prepare against your regular lines too!

In open tournaments, the situation is different. You will get to know whom you play only before the next round. You can and should prepare once the pairings are published, but that is a lot of work to do in such a short time span. It is better if you already have your openings prepared beforehand. So when you prepare for a tournament, you should have some idea of what openings you will play. The depth of your opening preparation depends on your level. The stronger you are, the more you should know.

At the club level, as Black, you should be ready at least for 1.e4 and 1.d4. The other moves are also likely to happen at any level, but these two are the most frequent. As White, prepare for the main replies against your first move. If you do this work before the tournament, you will have more time to fix the arising issues and later, save your energy during the event.

It is also a good idea to adjust your openings for time control. In blitz or rapid, you can play different openings. Sometimes your opponents will not have enough time to figure out what to do; or it can be something simple, so you would not need to spend much time on the opening phase.

One of the best ways to prepare and get in a good shape is to play training games. This way you will not only get to practice your openings but see what areas you should work on as well. Analyze such games, and you will be able to get rid of some mistakes before the tournament.

Many people also brush up on their endgame knowledge. It is good to remember how to checkmate with a knight and bishop or make a draw in some rook endings. Although let’s admit this is something mostly only professional chess players do.

Be ready for different kinds of situations.

Do you know how to claim a draw after a threefold repetition? What about the 50 moves rule? How do you react if your opponent offers you a draw at every move or suddenly starts talking? What do you do if the lights turn off in the playing hall? Many situations like this are possible during tournament games, and it is going to be a stressful experience. This is why it will be really helpful to have an idea of how to react when something like this happens.

Moreover, you should know how to play if you or your opponent gets into time trouble. Prepare some plans for how to cope with losses or keep calm after beautiful wins. What strategy will you employ against higher or lower-rated opponents? You should address these questions in advance.

If this is going to be your first chess tournament, talk to people who have already played in the tournaments to get to know more about their experience. This will make you feel more confident. You can find these people in your local chess club or on different chess platforms online.

You would also need to know about the rules of the tournament. For example, in the FIDE-rated tournaments, the players aren’t allowed to have any electronic devices in the playing area. This rule is used to avoid cheating, but many people simply forget to leave their phones or watches at home and fall victim to this rule. Some tournaments provide the players with storage places for electronic devices. If your phone makes any sounds during the game, the arbiters will have to stop the game and count it as a loss for you. So be aware of this rule!

Many people have learned how to play chess more or less recently and always been playing online only. In this case, it seems to be necessary to get a set of chess pieces before the tournament and practice playing on them. The perfect scenario if you get exactly the same set as it is going to be at the tournament. You can set different puzzles on your physical board and try to solve them like that. At first, it can be challenging to think on a real board, but you will get used to it and enjoy playing offline. Also, don’t be afraid to enter your first tournament; even the world champions had to start at some point.

This all may seem like a lot of work to do, but you can choose what you think is more important for you and focus on that only. Benjamin Franklin said: “By failing to prepare, you are preparing to fail.” Remember this when you prepare for your next tournament, and still, don’t forget to just enjoy the game. Good luck!