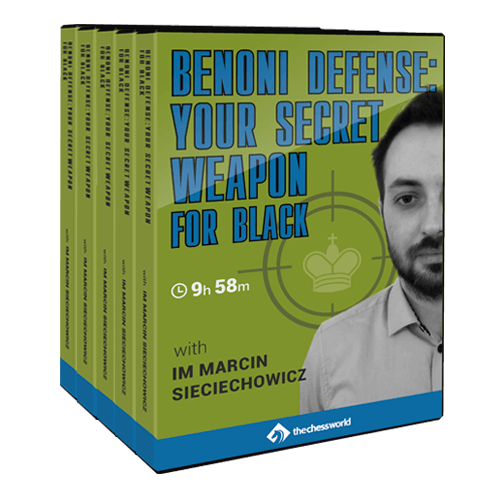 IM Marcin Sieciechowicz is here with his 10-hour video training Benoni Defense for Black that dissects the most complex variations and reveals the best lines to pursue as Black and gets you playing the Benoni like a champ in no time!

It’s super sharp and excellent to play for a win against 1.d4, but few dare to try it because it’s too risky and borderline dubious.

That’s the Benoni Defense for you.

Strategically, you give up the e-pawn for a c-pawn and end up allowing White with a nice spatial advantage.

Then why does Black play this defense?

It gives Black nice play along the b- and e-files… and if White over-commits or stretches his position too fast, Black’s pieces can immediately spring into action with explosive tactics.

In short, the Benoni is dynamic and dangerous as no other defense against 1.d4.

And who better to teach you the Benoni Defense than our very own IM Marcin Sieciechowicz?

And gets you playing the Benoni like a champ in no time!

Benoni is sharp. Benoni is unpredictable. And it creates imbalances between both sides.

It’s your opponent or you who will play the master stroke—who is it going to be?

No worries. It’s always YOU.