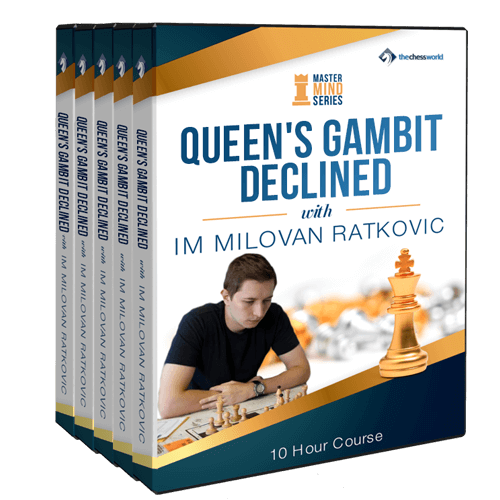 IM Milovan Ratkovic comes in with his latest course Queen’s Gambit Declined - a 10+ hour video training focusing on refuting the best possible replies by White (including some tricky ones like the Catalan or the London).

What does Black do next? Capture or not?

Should Black let go of the free pawn? Guess what, it is not a free pawn! By capturing the c-pawn, you are losing a tempo and that’s what White wants.

The Queen’s Gambit Declined is one of the strongest responses to White’s d4-c4 setup. It not only grabs the center for Black but also releases the dark-squared bishop into the game.

What about the locking-in of the light-squared bishop, though? Black tries to exchange it off, or better yet, it is great for defensive purposes.

What if White wants to go for the Modern or the Exchange variation in the QGD?

What if White goes for the London system? Or the Catalan?

That’s where IM Milovan Ratkovic comes in with his latest course Queen’s Gambit Declined – a 10+ hour video training focusing on refuting the best possible replies by White (including some tricky ones like the Catalan or the London).

In this course, Ratkovic focuses on the less explored lines in the QGD where Black is most likely to struggle and lose to White – no more shooting arrows in the dark as Black!

★★★★★
Jordan P. (Jul 13, 2021)
Yet another solid opening repertoire by IM Ratkovic, I have all his courses and looking for more to come! Highly recommended and five stars!
Add a review