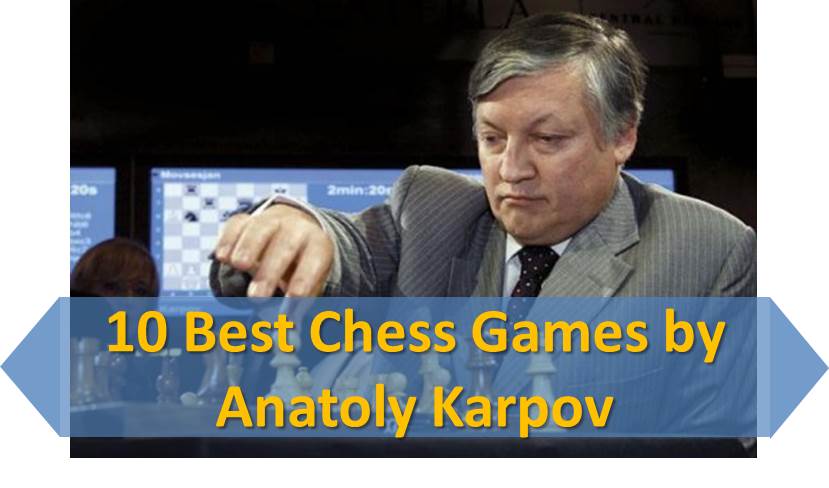 Today we will explore chess games of the 12th World Chess Champion Anatoly Karpov. He was holding the highest world title for 10 years, from 1975 to 1985. Karpov’s won incredible 160 chess tournaments in his career. For decades Karpov was among the world’s most elite chess players. He is considered to be one of the greatest chess players of all time. Karpov plays solid and positional chess, avoiding any risks but exploiting fully any tiniest mistake made by his opponent.

Anatoly Karpov speaks about his chess style in the following way:

“Let us say the game may be continued in two ways: one of them is a beautiful tactical blow that gives rise to variations that don’t yield to precise calculation; the other is clear positional pressure that leads to an endgame with microscopic chances of victory…. I would choose the latter without thinking twice. If the opponent offers keen play I don’t object; but in such cases I get less satisfaction, even if I win, than from a game conducted according to all the rules of strategy with its ruthless logic.”

Note: the games are arranged in no particular order.

Studying great chess games is a very important part of chess training, This is the approach we recommend for all chess players who want to improve their game using our 3 weeks extensive training course. You will learn a great deal from 21 very instructive, well annotated grandmaster games and will dramatically improve your attacking skills.

You can download each individual game by clicking on the icon under the board. At the moment you cannot download all 10 games at once.