27 Most Powerful Quotes and Phrases That Describe Chess

This is a list of 27 most important chess traits represented in form of quotes from the greatest chess players of all times: Kaparov, Fischer, Karpov, Lasker, Tarrasch and many others. To be good at something we need to understand what and how the greatest think about the subject. That applies to chess as well; by exploring minds of greatest chess players it is possible to better understand the nature of this game. Enough philosophy, enjoy the list of quotes about chess! 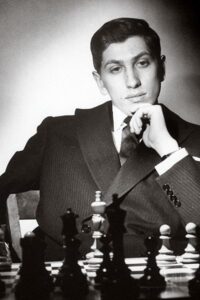 Inspired by quotes about chess? Check out our articles:

Chess is like boxing. You have to know when to duck and when to punch. Bobby Fischer

‘Chess is just like life ,there are no absolute truths’. Mikhail Tal.

This Aristotle quote is totally fake. There was no chess at the time and especially in Greece. I am Greek 🙂

I am the fake Sam Sloan.

See this quote that defines Chess:

Thanks.
Congratulations for your good site.

Invnetion: the smoothest life is based on chess: and it’s moves and/or non-moves?

Thank you! I would now go on this blog every day!

Hello,
Ugh, I liked! So clear and positively.