3 Things You Can Learn from Bobby Fischer 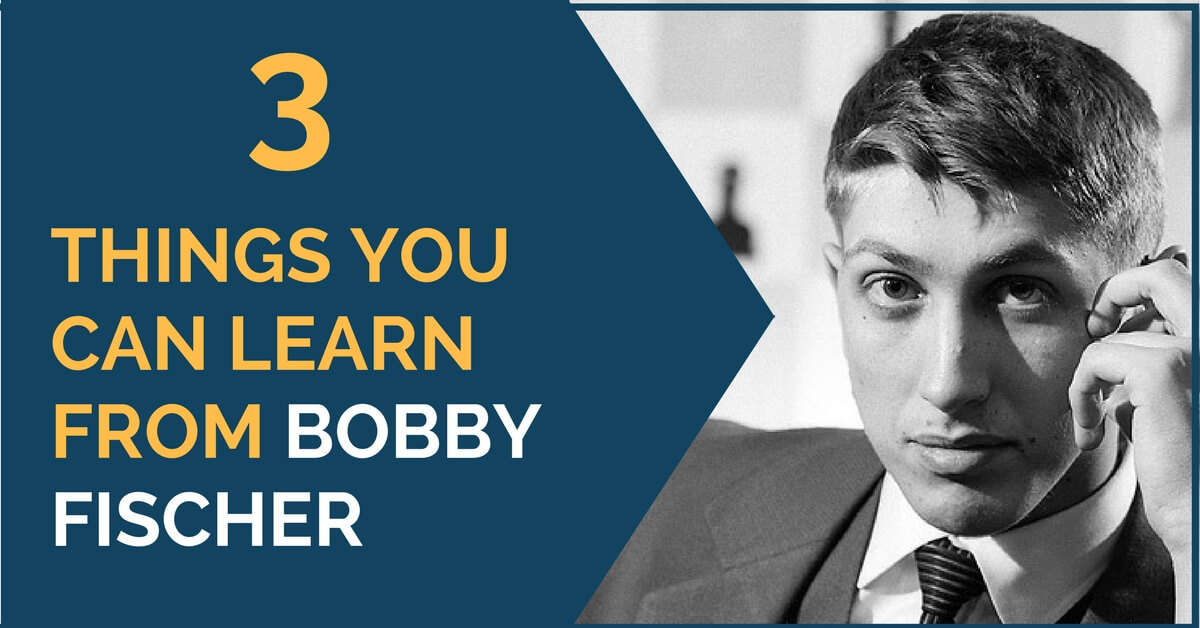 Robert James Fischer (1943 – 2008) is a resounding name in the chess world, and not only. Many non-chess players also know who he was and look up to him as a genius. Although his chess career was rather short, he left behind many brilliancies and original ideas that are thoroughly studied by every chess aficionado around the world up to this day.

Bobby Fischer showed a great understanding of the game from a very early age and became a Grandmaster at only 15 years old – the youngest one at that time. He is also the only player to have ever achieved a perfect score (11/11!) in the U.S. Championship. He went on to win the 1970 Interzonal Tournament with an impressive 3 ½ point margin and became FIDE’s first official number one player in 1971.

He won the World Champion title in 1972, after defeating Boris Spassky in a match held in Reykjavik, Iceland. He held it until 1975, when he refused to defend his title due to disagreements between him and FIDE regarding the match conditions. As a result, the title was automatically granted to another legend of our game, Grandmaster Anatoly Karpov.

As a player, Fischer didn’t have a very wide opening repertoire; he was rather predictable in this area. However, he had and extensive knowledge in the variations and many original ideas in the openings that he played, thus making it difficult for his opponents to exploit this limitation. He had a great contribution to the chess theory, being considered an expert in the Ruy Lopez and the Najdorf Sicilian (with black). Here, he managed to prove that the Poisoned Pawn variation, a line that had been considered dubious for many years, was, in fact, safe to play for black.

1.Game of the Century

In this article we will show you a few of his brilliancies and contributions to our game. We will start with the so-called “Game of the Century”, a beautiful attacking game that 13 years old Fischer played with the black pieces against Donald Byrne in the Rosenwald Memorial Tournament in New York City in 1956. If you haven’t seen it before, we’re certain that you will be impressed and if you have, you’ll surely enjoy playing through it again:

2.Fischer’s idea in the Hedgehog

Now a very well-known plan in the Hedgehog pawn formation, the idea of playing Kh8, followed by Rg8 and g5-g4 was first played by Fischer in his game against Ulf Andersson. He was playing with the white pieces and started by 1.b3, but the game soon transposed to a reversed Sicilian. The idea is quite simple and straightforward – coordinate a crushing attack against the black king. Check it out:

3.Fischer versus the Najdorf

Bobby Fischer [here are his 10 most favorite openings] wasn’t only an expert playing the Najdorf, but also contributed a lot to developing the theory for the white side. His weapon against his own favorite line of the Sicilian was 6. Bc4, with the idea of putting pressure over the f7 point. This variation is known as the Fischer-Sozin Attack and was very popular in the 1970s, after Fischer had adopted it in tournament play. The next game against Jacek Bednarski, played in the Olympiad in 1966, demonstrates some of its dangerous ideas:

We hope you enjoyed reading this article and going through the games above will encourage you to learn and see more games of the classical players. It is a great way of training and enriching your general knowledge of chess. Thank you for reading!