Man versus Machine – is this the end of chess? 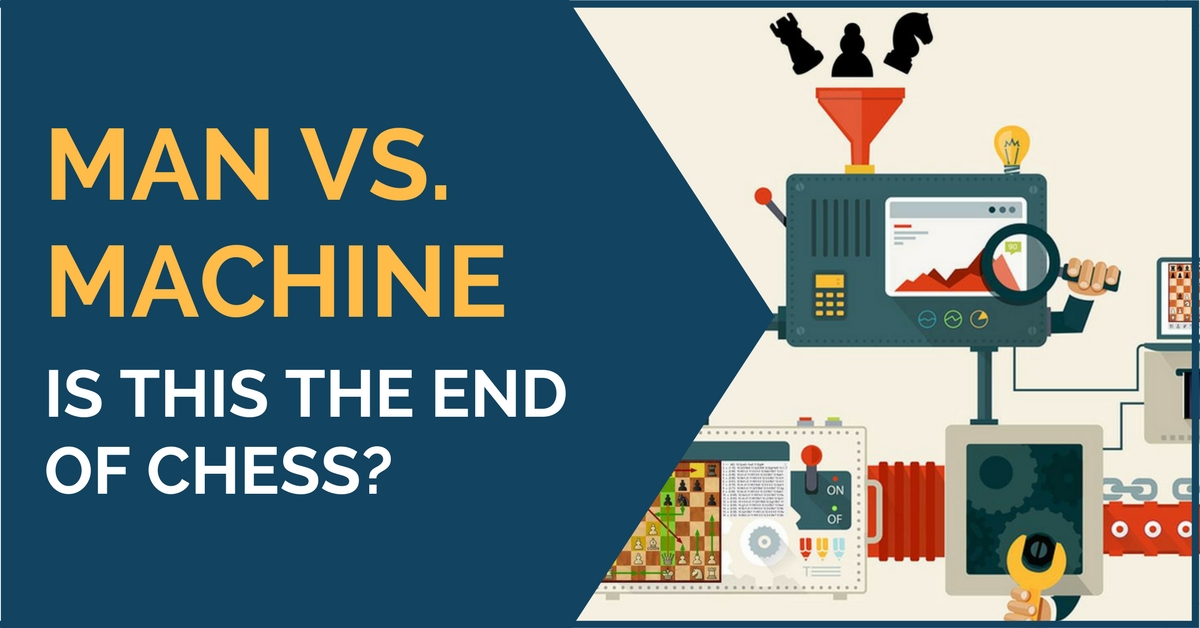 The impact the advance of technology has had on our every day is undeniable. It is, of course, debatable, whether this impact has been all for the best or has more negative effects. This debate can be extended to the field of chess, where most (if not all) of a chess player’s work is facilitated by computers and powerful engines. The fight starts right from the beginning, where players try to find even the tiniest of advantages from the opening and look for novelties… and how else to do so than with the help of chess engines?

The latest “shock” was given to the chess world by the now famous AlphaZero, who completely swiped off Stockfish 8. But the greatest surprise was not this, but the fact that it is said to be a self-taught computer system.

It has only been shown how the pieces move and it went on to learn everything else by itself – it had to “invent” the chess theory and further choose the best systems to be played. It played games against itself and learned from its mistakes, to develop into a strong chess force with a somewhat human-like approach to the game.

Going back to the opening theory, graphs show that it took AlphaZero little time to reject some of them, such as the French or the Caro-Kann. It also showed that some variations such as the Najdorf “only” lead to a draw for white, so they were again rejected. Such things only make one wonder – what is the future of chess?

Is the time of human sparkle and creativity over?

Will we have to only listen to what computers say in the future?

Is, in fact, this the end of chess?

Looking at the games played in the match against Stockfish [you can play against the Stockfish as well] make your head completely swirl. Some of them seem surrealistic, with moves that only appear to make sense to a computer.

For example, take a look at the game number 10 of the published ones. We chose not to add any commentaries, as they would probably be in vain:

As impressive as this game may seem, we believe that human chess is very much alive. Yes, computers play a very important part of our life and they do have a serious influence on shaping one’s playing style. As most chess players train a lot with the engines on, they have developed a certain sense for spectacular moves that seem nothing easy to find.

However, the biggest influence computers have is on the openings. Even so, the number of moves and variations that need to be memorized is endless. A player may make all the first recommendations of the engine, but only to a point.

And then, creativity takes over. In the end, that’s where the beauty of chess begins – watching how from a roughly equal position players are able to develop ideas and build something completely new.

One example that will certainly leave you open-mouthed is a recent game played between two very strong Grandmasters – Mateusz Bartel of Poland with the white pieces versus Igor Kovalenko of Latvia.

We are certain that playing this game will restore your faith in “human” chess; check it out:

The debate still remains open, of course, but we strongly believe that it will take many years (if it will ever happen) for chess to become a “solved” game, the way AlphaZero solved Go, for example. What might happen is that some openings cannot be played anymore due to forced lines that lead to one result?

Even so, if this does happen, there will probably be nothing to worry about. It seems impossible for the human mind to memorize the infinite lines that will surge.

However, there is still a long way until that happens, so we might as well just enjoy chess the way it is now.

What do you think; what is the future of chess in your opinion?

I have been searching for half an hour for a single video of a human playing against Alphazero. It is really perplexing.

I wonder if there is a comparison to the one minute mile. Until someone broke it, it was thought to be impossible. Similarly, the best (human) chess players have been stuck around 2800. With better competition will we see a human crack 3000?

@Renis This is article is talking about chess, not anything related to Go. AlphaZero annihilated one of the world’s strongest chess engine, Stockfish 8. At least read the article before commenting 😉

AlphaZero did not solve Go at all. Go is much more complicated and AlphaGo even lost some games in difference from AlphaZero.
At least read well before writing stupidities

thx sir for the great article is this alpha zero can solve chess injuries what is the next future generation of chess if alpha chess is released ?? did you able to understand the game played by alpha zero vs stockfish 8