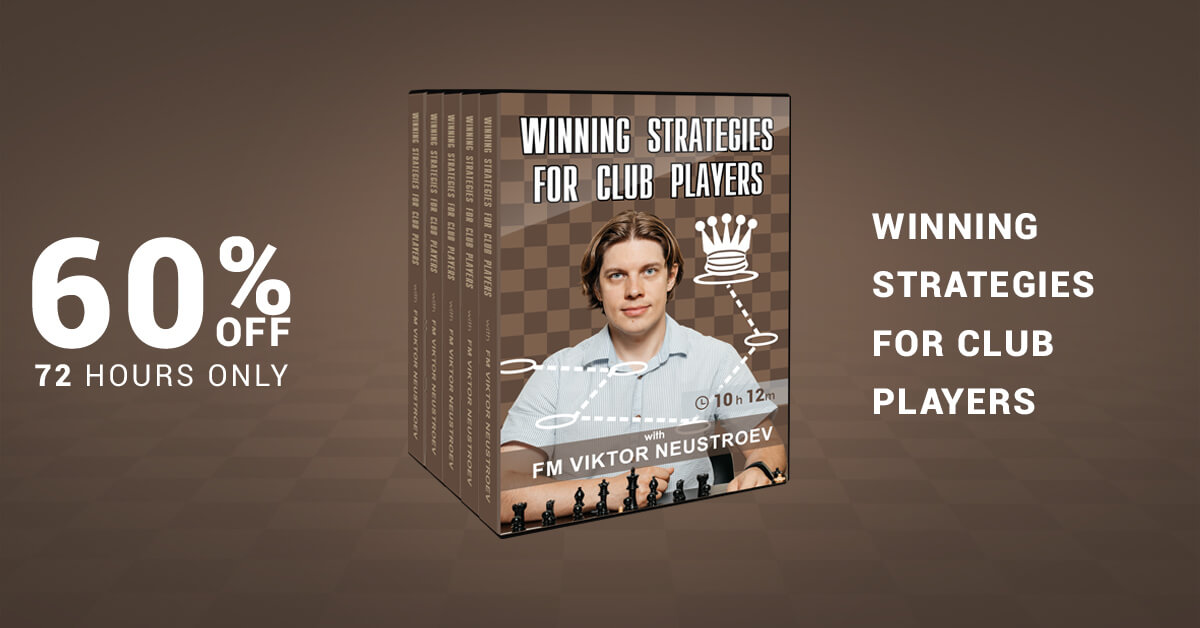 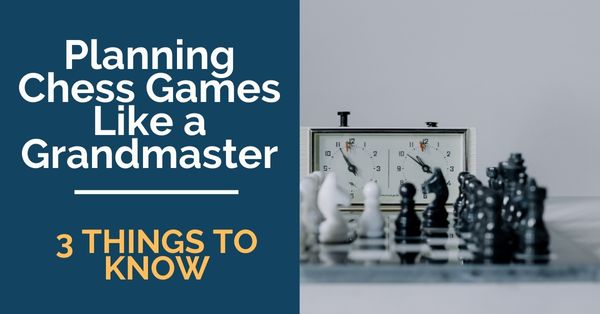 Knowing what you have to do in a position is the key to getting an advantage and even winning your games. Different positions require different approaches. You can’t attack in every position, just as well as you shouldn’t play quietly all the time. It is important to recognize how a position should be played and this is something Grandmasters are very good at.

Many club players enjoy playing attacking games and are trying to do this in most of their games. However, starting an unprepared attack can create unfixable holes in the position.

A good player will know how to dodge the bullets and use the weaknesses that have been created. Without realizing it, the attacking player has just made it easier for his opponent to win the game.

So, what should you be looking for when deciding on a plan? There are a lot of small “signs” in a positions that can indicate the right plan. Some of these are the material count, the king safety, the pawn structure, the type of center, the pieces that you have on the board, the open files, the weaknesses, etc. So let’s see them in more detail:

Plans will change a lot if we don’t have even material on the board. A player who is down material will be open to taking more risks, try to drive the game into complications, and setting up more tactical traps. This is a player who will try to get the initiative and make it as difficult as possible for his opponent to get win. If an attack isn’t an option, he will try to simplify into a drawn endgame, try to achieve a fortress, or set up stalemating ideas.

If you are the one trying to win the game, always remember that your opponent will be looking for counterplay, so be aware of tricks! Don’t get defensive and give your opponent the initiative.

On the contrary, the best mindset in positions where you have a material advantage is to find ways of putting pressure on your opponent. Looks for the attack, put him in uncomfortable situations. Trades should usually favor you. However, make sure you don’t trade into an endgame you can’t win.

Let’s take a look at the following position: 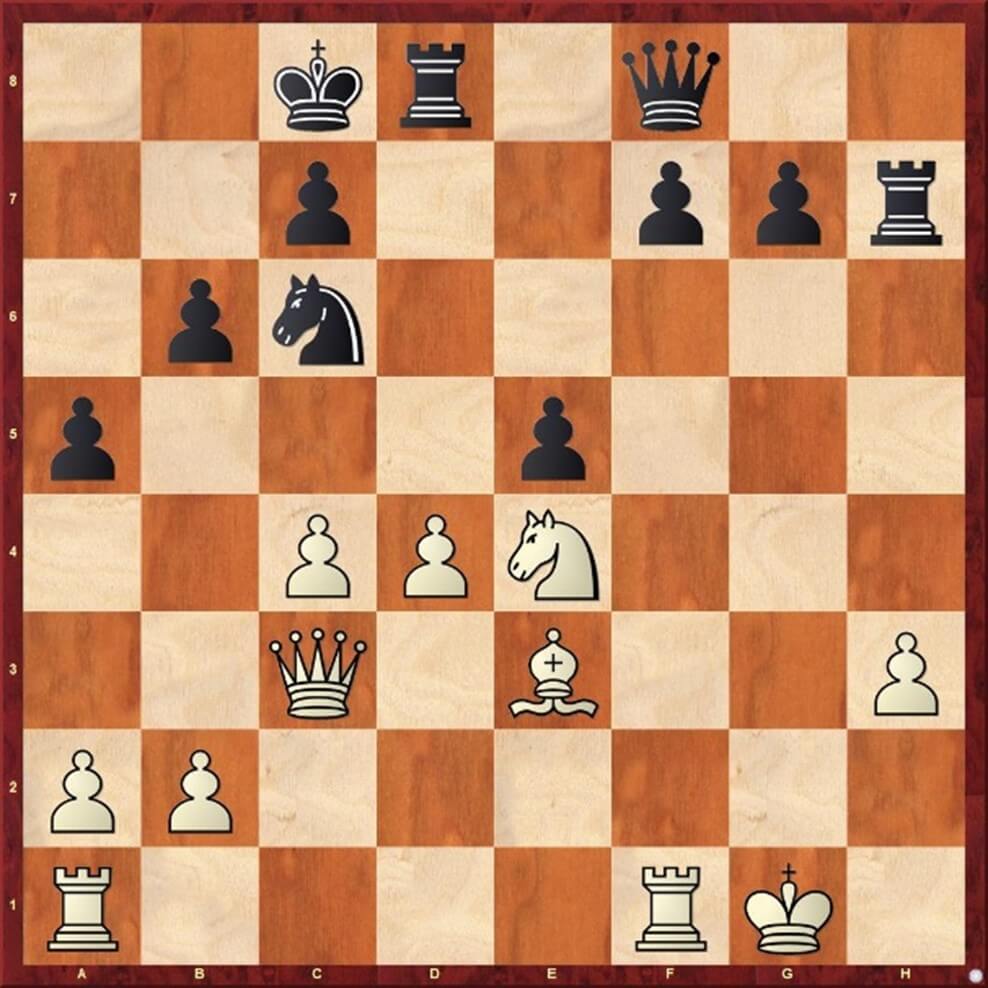 We see that white is up a piece. Black has only one pawn for it, but white’s king is exposed and there’s another pawn hanging on h3. He needs to be careful and play this accurately. Black has just captured on e5, hoping to open up the position and put more pressure on white.

White can take it, but that would open black’s rook and give him more activity. So he followed up with 24.d5! keeping black’s pieces closed. His play here and the way he annihilates black’s hopes for an attack is very instructive.

This is a very important part of choosing the right plan. An open king usually equals attacking chances. If the center is closed, for example, and it seems like the king isn’t easy to reach, a good plan could be to open up the position and try to create threats based on the open king.

If you have a development advantage and the opponent’s king is still stuck in the center, then you should act fast. This advantage will disappear as soon and the king castles. So, in these cases, you should be looking for active moves and even sacrifices that allow you to bring your pieces on better squares and attack the king.

You should also try to open up the center and make the king more vulnerable.

The following position arises from the Sveshnikov variation of the Sicilian variation, but Grandmaster Evgeny Sveshnikov was the first one to show the dangers for white: 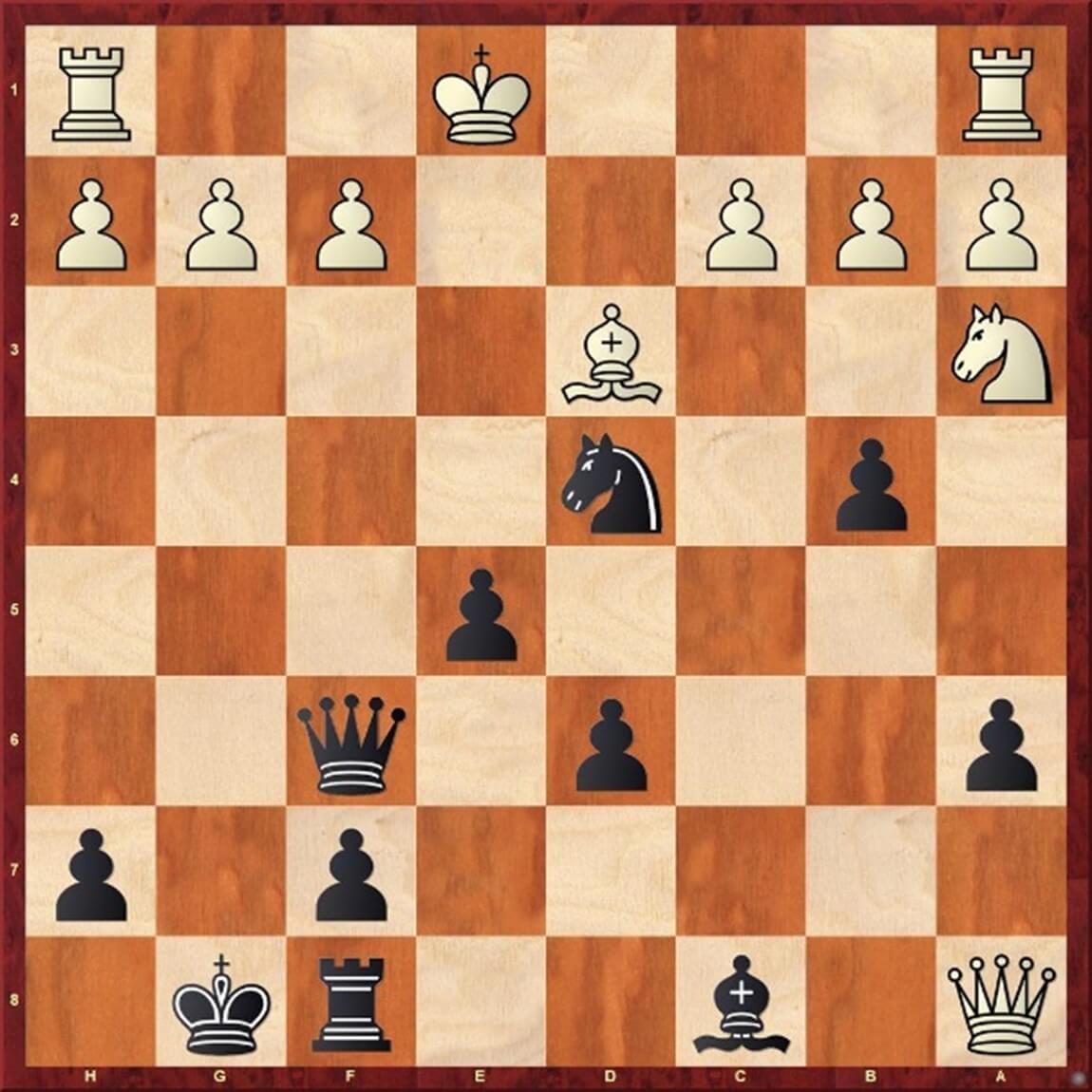 It’s important that black wastes no time here and immediately starts to improve his pieces and create threats. With his last move, 14.Qe4, White has created the threat of f6 followed by Bd3. Black’s king will be exposed if he allows this and he will get in trouble. So black continued here with 14…Nd4!

He will lose and exchange after 15.f6 Bxf6 16.Nxf6 Qxf6 17.Qxa8 b4, when white can’t move the knight away due to the Nxc2 threat, but he will have very good compensation in the form of his better piece play, strong center, and white’s exposed king.

It’s important that black keeps the threats coming, so here he continued with 18…Bf5 developing another piece with tempo. After 19.Qd5 Bxd3 20.cxd3 bxa3 21.0-0 white has managed to finish his development, but now black will have a very dangerous passed pawn on b2: 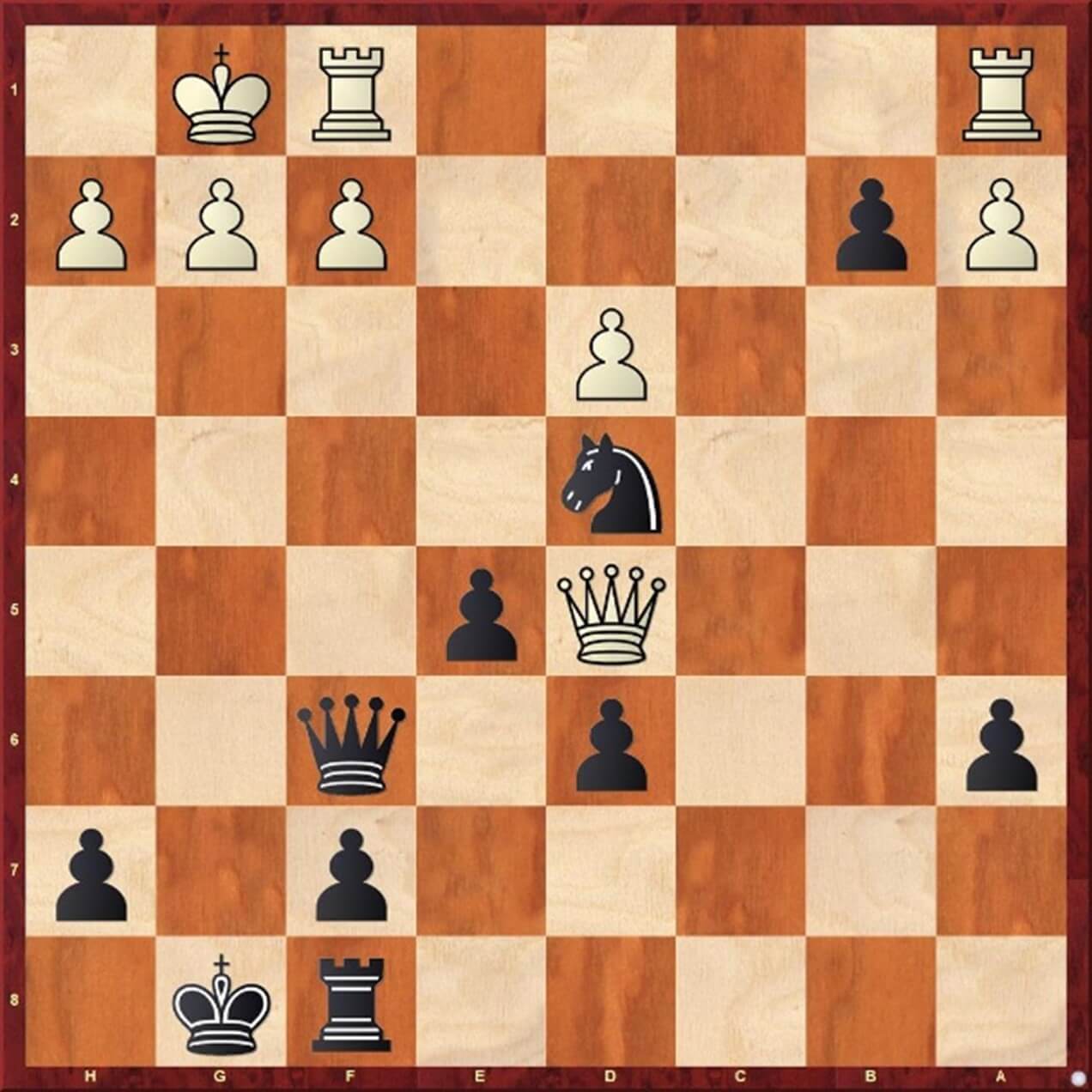 Here white continued with 22.Rae1 and after 22…Rb8 black got very good pressure on the b file and went on to win the game:

3. Identify the strategic strengths and weaknesses of your position

On the other hand, if you have any major weaknesses in your position, try to get rid of them.

Keep your opponent from using them, if possible, exchange the pieces that could attack them and avoid getting into passive positions where you will have to defend for a long time.

If your position is compromised from a positional point of view, you could be looking for dynamics, trying to get the initiative, without creating further weaknesses in your position.

Let’s take a look at the following position: 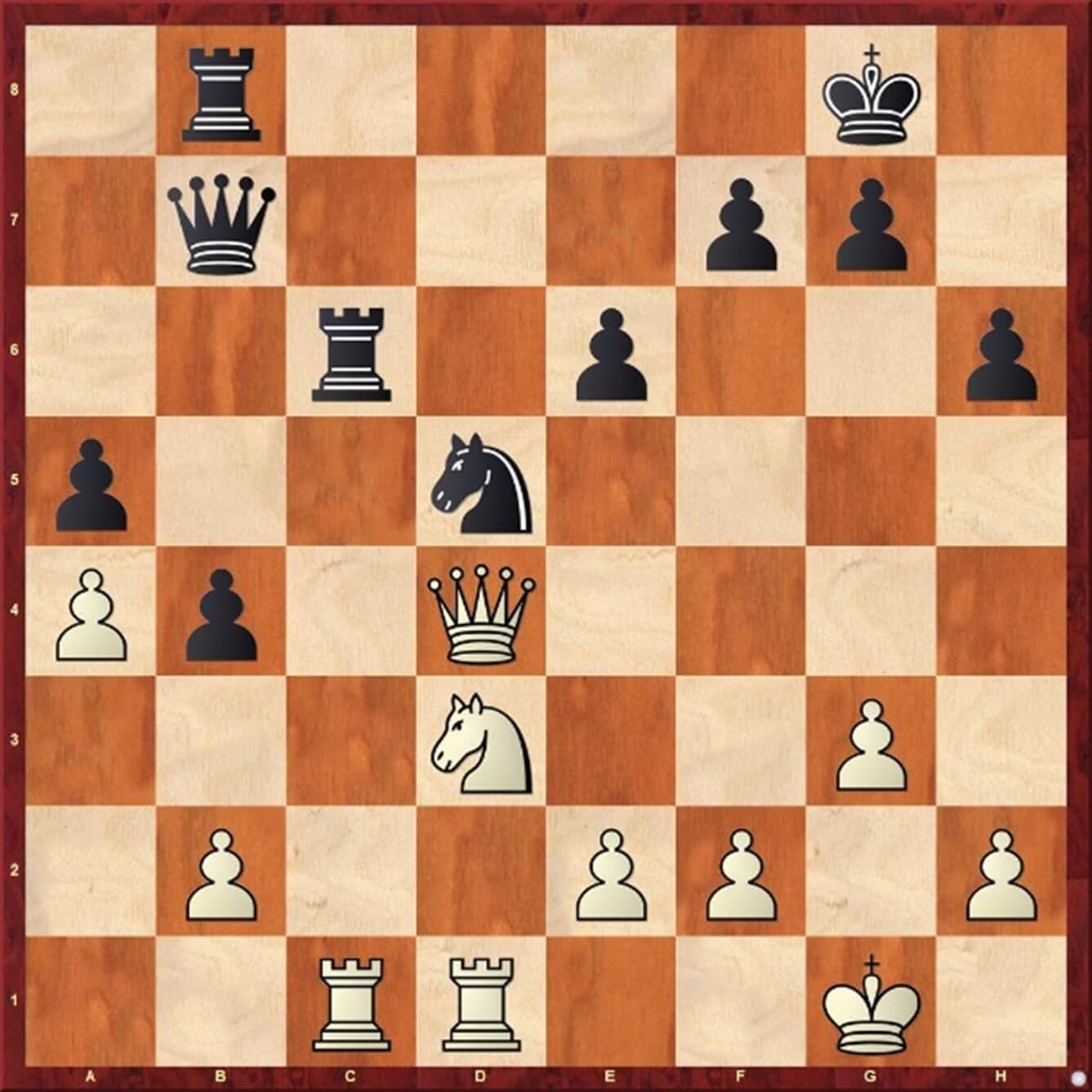 If we start scanning for any important positional elements, we will notice two things here. First of all, black’s pawn on a5 is a weakness that white could try to attack. Secondly, we have two open files – the d and c. The d file, however, isn’t relevant to our position. The two knights on d5 and d3 are blocking the entrance of the rooks.

That leaves us with the c file – this is important for the position and whoever wins the fight for it will have an advantage.

White doesn’t have any weaknesses in his position, so we can conclude that here white has a small advantage and if he can find a good plan, he could try to build on it. Andersson continued with 28.Rc5! a move with a double purpose – he immediately puts pressure on the weak a5 pawn and at the same time prepares to double the rooks on the c file.

After 28…Rxc5 29.Qxc5, black is faced with a difficult choice – he has to either give up the a5 pawn and occupy the c file or defend the pawn, but give up control of the file after Rc1. In either case, white will have good pressure.

Black chose the first in the game, continued with 29…Rc8, sacrificing the pawn in exchange for piece activity, but ended up losing the game after a long fight: