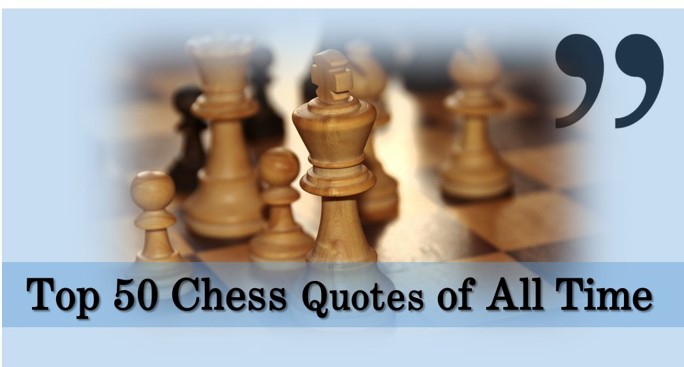 Great quotes store big and important ideas in just a few words. They transport wisdom that great chess players have accumulated throughout decades of experience. This top 50 of chess quotes is for those who is aiming for big success. These quotes will both motivate and educate you for becoming a better chess player.

1. “By the time a player becomes a Grandmaster, almost all of his training time is dedicated to work on this first phase. The opening is the only phase that holds out the potential for true creativity and doing something entirely new.” – Garry Kasparov
2. “When your house is on fire, you can’t be bothered with the neighbors. Or, as we say in chess, if your King is under attack, don’t worry about losing a pawn on the queenside.” – Garry Kasparov 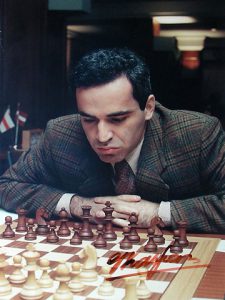 3. “By strictly observing Botvinnik’s rule regarding the thorough analysis of one’s own games, with the years I have come to realize that this provides the foundation for the continuos development of chess mastery.” – Garry Kasparov

4. “Chess continues to advance over time, so the players of the future will inevitably surpass me in the quality of their play, assuming the rules and regulations allow them to play serious chess. But it will likely be a long time before anyone spends 20 consecutive years as number, one as I did.” – Garry Kasparov
5. “You can’t overestimate the importance of psychology in chess, and as much as some players try to downplay it, I believe that winning requires a constant and strong psychology not just at the board but in every aspect of your life.” – Garry Kasparov

6. “I … have two vocations: chess and engineering. If I played chess only, I believe that my success would not have been significantly greater. I can play chess well only when I have fully convalesced from chess and when the ‘hunger for chess’ once more awakens within me.” – Mikhail Botvinnik

7. “If you are going to make your mark among masters, you have to work far harder and more intensively, or, to put it more exactly, the work is far more complex than that needed to gain the title of Master.” – Mikhail Botvinnik

8. “Above all else, before playing in competitions a player must have regard to his health, for if he is suffering from ill-health he cannot hope for success. In this connection the best of all tonics is 15 to 20 days in the fresh air, in the country.” – Mikhail Botvinnik 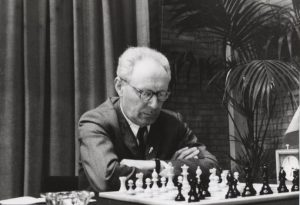 9. “If you are weak in the endgame, you must spend more time analysing studies; in your training games you must aim at transposing to endgames, which will help you to acquire the requisite experience.” – Mikhail Botvinnik

10. “My forte was the middlegame. I had a good feeling for the critical moments of the play. This undoubtedly compensated for my lack of opening preparation and, possibly, not altogether perfect play in the endgame. In my games things often did not reach the endgame!” – Boris Spassky

11. “The shortcoming of hanging pawns is that they present a convenient target for attack. As the exchange of men proceeds, their potential strength lessens and during the endgame they turn out, as a rule, to be weak.” – Boris Spassky

12. “Of course, analysis can sometimes give more accurate results than intuition but usually it’s just a lot of work. I normally do what my intuition tells me to do. Most of the time spent thinking is just to double-check.” – Magnus Carlsen

13. “I started by just sitting by the chessboard exploring things. I didn’t even have books at first, and I just played by myself. I learnt a lot from that, and I feel that it is a big reason why I now have a good intuitive understanding of chess.” – Magnus Carlsen 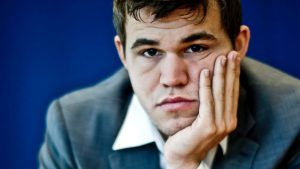 14. “Self-confidence is very important. If you don’t think you can win, you will take cowardly decisions in the crucial moments, out of sheer respect for your opponent. You see the opportunity but also greater limitations than you should. I have always believed in what I do on the chessboard, even when I had no objective reason to. It is better to overestimate your prospects than underestimate them.” – Magnus Carlsen

15. “I didn’t picture myself as even a grandmaster, to say nothing of aspiring to the chess crown. This was not because I was timid – I wasn’t – but because I simply lived in one world, and the grandmasters existed in a completely different one. People like that were not really even people, but like gods or mythical heroes.” – Anatoly Karpov

16. “By all means examine the games of the great chess players, but don’t swallow them whole. Their games are valuable not for their separate moves, but for their vision of chess, their way of thinking.” – Anatoly Karpov 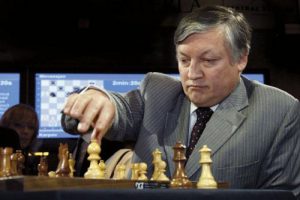 17. “The great mobility of the King forms one of the chief characteristics of all endgame strategy. In the middlegame the King is a mere “super”, in the endgame on the other hand – on of the “principals”. We must therefore develop him, bring him nearer to the fighting line.” – Aron Nimzowitsch

18. “If in a battle, I seize a bit of debatable land with a handful of soldiers, without having done anything to prevent an enemy bombardment of the position, would it ever occur to me to speak of a conquest of the terrain in question? Obviously not. Then why should I do so in chess?” – Aron Nimzowitsch

19. “When I today ask myself whence I got the moral courage, for it takes moral courage to make a move (or form a plan) running counter to all tradition, I think I may say in answer, that it was only my intense preoccupation with the problem of the blockade which helped me to do so.” – Aron Nimzowitsch

20. “It is a well known phenomenon that the same amateur who can conduct the middle game quite creditably, is usually perfectly helpless in the end game. One of the principal requisites of good chess is the ability to treat both the middle and end game equally well.” – Aron Nimzowitsch

21. “In mathematics, if I find a new approach to a problem, another mathematician might claim that he has a better, more elegant solution. In chess, if anybody claims he is better than I, I can checkmate him.” – Emanuel Lasker

22. “By positional play a master tries to prove and exploit true values, whereas by combinations he seeks to refute false values … A combination produces an unexpected re-assessment of values.” – Emanuel Lasker

24. “A player, as the world believed he was, he was not, his studious temperament made that impossible; and thus he was conquered by a player and in the end little valued by the world, he died.” – Emanuel Lasker

25. “It is no secret that any talented player must in his soul be an artist, and what could be dearer to his heart and soul than the victory of the subtle forces of reason over crude material strength! Probably everyone has his own reason for liking the King`s Gambit, but my love for it can be seen in precisely those terms.” – David Bronstein

26. “It is annoying that the rules of chess do not allow a pawn to take either horizontally or backwards, but only forwards … This psychological tuning is ideal for attacking purposes, but what about for defence?” – David Bronstein

27. “If you have made a mistake or committed an inaccuracy there is no need to become annoyed and to think that everything is lost. You have to reorientate yourself quickly and find a new plan in the new situation.” – David Bronstein

28. “When you play against an experienced opponent who exploits all the defensive resources at his command you sometimes have to walk time and again, along the narrow path of ‘the only move’.” – David Bronstein

29. “Chess is not for the faint-hearted; it absorbs a person entirely. To get to the bottom of this game, he has to give himself up into slavery. Chess is difficult, it demands work, serious reflection and zealous research.” – Wilhelm Steinitz

30. “The task of the positional player is systematically to accumulate slight advantages and try to convert temporary advantages into permanent ones, otherwise the player with the better position runs the risk of losing it.” – Wilhelm Steinitz

31. “Whenever Black succeeds in assuming the initiative and maintaining it to a successful conclusion, the sporting spirit of the chess lover feels gratified, because it shows that the resources of the game are far from being exhausted.” – Savielly Tartakower

32. “No one ever won a game by resigning.” – Savielly Tartakower

33. “It is always better to sacrifice your opponents’ men.” – Savielly Tartakower

34. “The blunders are all there on the board, waiting to be made.” – Savielly Tartakower

35. “A thorough understanding of the typical mating continuations makes the most complicated sacrificial combinations leading up to them not only difficult, but almost a matter of course.” – Savielly Tartakower 36. “All that matters on the chessboard is good moves.” – Bobby Fischer

37. “A strong memory, concentration, imagination, and a strong will is required to become a great chess player.” – Bobby Fischer

39. “To play for a draw, at any rate with white, is to some degree a crime against chess.” – Mikhail Tal

40. “I have always thought it a matter of honour for every chess player to deserve the smile of fortune.” – Mikhail Tal

41. “Naturally, the psychological susceptibility of a match participant is significantly higher than a participant in a tournament, since each game substantially changes the over-all position.” – Mikhail Tal

42. “I go over many games collections and pick up something from the style of each player.” – Mikhail Tal 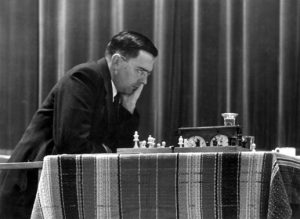 44. “If it is true that a player’s style is his person, then everyone plays as he is intended to by nature. I am naturally cautious, and I altogether dislike situations which involve risk.” – Tigran Petrosian

45. “In almost any position the boundless possibilities of chess enable a new or at least a little-studied continuation to be found.” – Tigran Petrosian

47. “Even the most distinguished players have in their careers experienced severe disappointments due to ignorance of the best lines or suspension of their own common sense.” – Tigran Petrosian

48. “In some places words have been replaced by symbols which, like amulets from a witch’s bag, have the power to consume the living spirit of chess.” – Tigran Petrosian

49. “It is easy to play against the young players, for me they are like an open book.” – Tigran Petrosian

Analyzing well annotated chess games of great ches players should be one of the priorities if your goal is to improve your positional understanding, or simply to become a stronger chess player.

That’s why in our training program we have a carefully selected and fully annotated GM games that will demonstrate the positional ideas that are absolutely essential and can be applied in your own games.