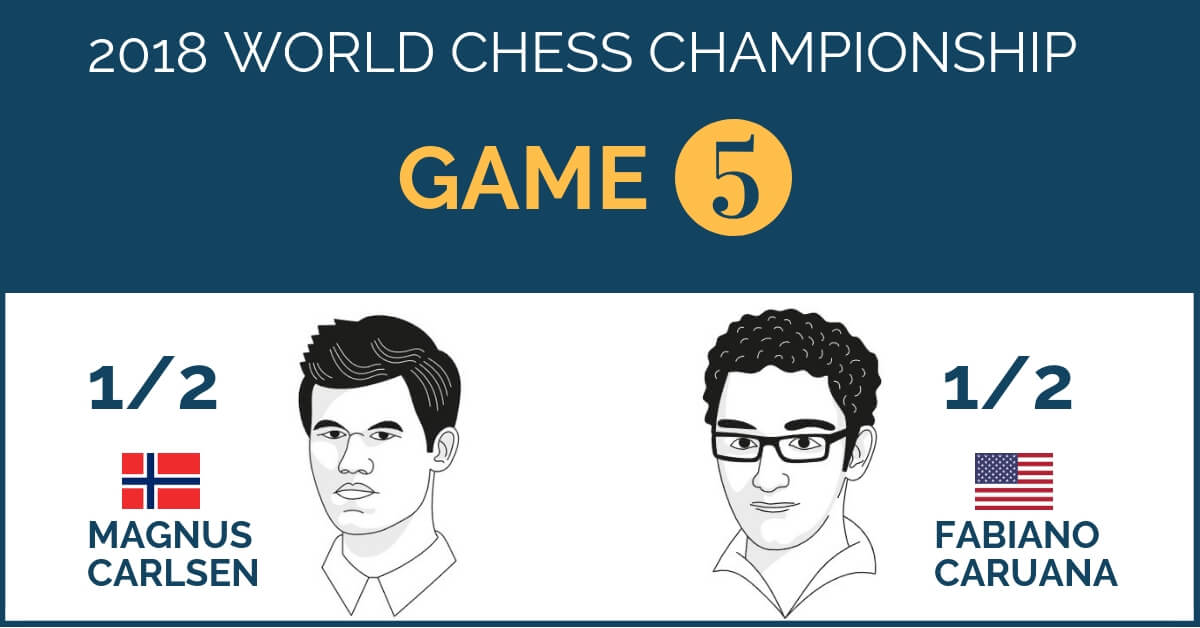 Today finally we had some excitement in the opening after the move 4.b4. Caruana was hoping to surprise his opponent but Carlsen handled the situation very well and after 15 moves we went into the equal endgame. It will be interesting to find out until which move was the home preparation from Caruana. Then after 17. c3 white had some problems and black were pressing for a win. In the end, Caruana played good defense and drew the game.

The opening line in Game 5 of the World Championship Match was covered in the 1984 Batsford book ‘The Anti-Sicilian 3.Bb5’ by Razuvayev and Matsukevich, considering Black’s position satisfactory after 11…Ne7. This shows that all new is well forgotten old.

Carlsen successfully neutralizes Caruana’s preparation today and even got decent winning chances in the endgame.

It is funny that in all 5 games black had slightly better endgames so the fact that Carlsen has next two whites maybe not so important. It also shows the big difference in chess nowadays and compared to 20 years ago when playing white was considered very important.

The leaked Caruana preparation video became the main talking point last few days and even went on CNN. NRK reporting that Caruana had no idea about the video until after he had finished game 4. Carlsen actually knew about it, while Caruana did not. That is pretty shocking.

Asked who his favorite player from the past is, Carlsen replied:

I’m not really the person to have idols. I admire what people can do, not necessarily who does what. And I would say, keeping in that in mind, my favorite player from the past is probably… myself, three or four years ago.

I definitely hoped for more than I have shown until now. I have to focus on that now. I am pretty pleased with today’s game as long as I didn’t miss anything I will regret. I felt that I had a fine position after the opening. I hoped to press him. I don’t think I played particularly well today. There were not many difficult decisions.

It was a long preparation from him. But I wasn’t very worried about the position that arose. I felt that I had sufficient compensation with my bishop pair. After that, I found a way to play for an advantage, but I found nothing clear.

Caruana to NRK: “A well-played game with some fireworks.”

Although for the 3rd time in a row Caruana was worse with White it’s the first game he wasn’t outplayed, he was only out prepared… or out-tricked. It was a weird preparation by Fabiano – this b4, it’s not like it’s something new, not even close to it… It’s a little bit cheap to hope that Magnus simply doesn’t know this move.

Grischuk on the possibility of 12 #CarlsenCaruana draws: “It will be cool – the first match like that in history!”