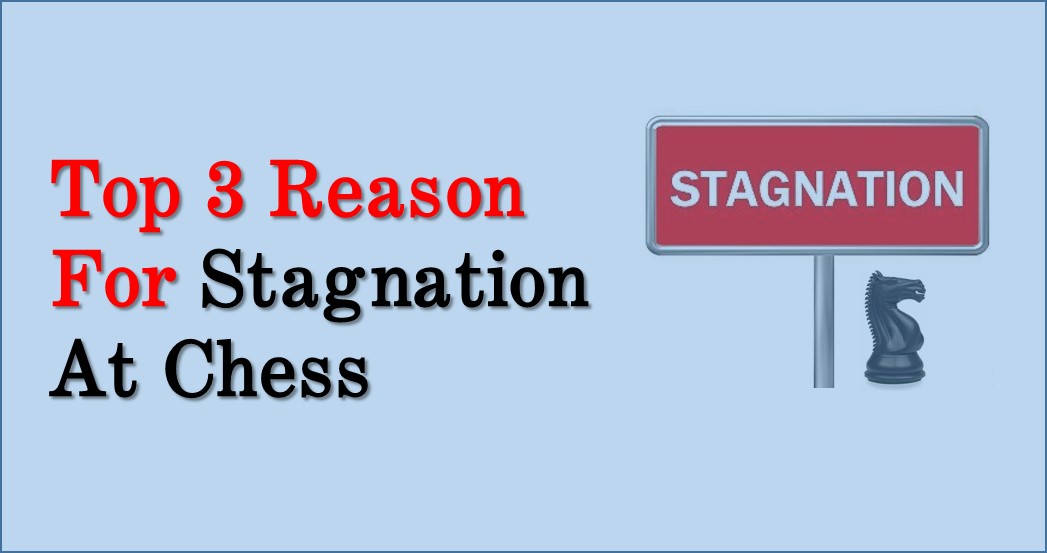 Many players wish to improve their game. They work on chess, spend time but after few months hit some sort of invisible wall which does not allow them to move forward. Have you noticed how fast your elo was growing in the beginning? A couple days of chess training could easily add 30 – 50 elo points. What happened next?

After you reach a certain level (whether it is 1300, 1500, 1800 or 2000) it became tremendously hard to get any better. Now after a month of training you barely picking up any points. Does this type of chess stagnation sounds familiar? Don’t worry, you’re not alone. In today’s article we will explore why that happens and what can be done to fight it.

Let’s take a look at 5 most common reasons that lead to chess stagnation.

Reason #1: Lack of a Strong Competition

You may be surprised to see the lack of a strong competition as one of the most important factors that prevent players from improving. I know, I would be surprised few years ago if I read it. I would ask myself, how is it even possible? Shouldn’t that be some major factor such as IQ or chess talent?

Not at all. Most chess players have 1300 – 1400 ELO not because of their intelligence level. In fact, almost all of them could reach 2000 and 2200. How? That is a question worthy of a separate discussion or even a book.

But let me tell you, if you do not have a regular sparring partner stronger than yourself, it is next to impossible to make progress. By playing against a stronger player, even if you do nothing else, you will most certainly improve your game. It may take time, but eventually you will become a better chess player.

Now I need to point out one small but a very important detail. How strong that partner needs to be? Can you play against 3200 rated Houdini and hope to get at least 2500? Maybe after hundred years of training you will. The idea is to play against a somewhat stronger player, about 200 elo points higher. These are the best kind of games to learn from, because you need to push yourself hard to stay in the game, and you need to play beyond your abilities to win the game. That’s exactly what leads to improvement.

Many chess players suffer from what’s known to be a “good-old” training habits syndrome. They get used to doing something so much that they do not want to step out of the comfort zone and give a fresh look at what they are actually doing. Their methods possibly worked before, until they reached that 1600 elo.

It is still fresh in their memory no matter how long ago that happened. They believe that by following that old routing they will somehow reach new heights. I’m sorry to disappoint you. It does not work like that. If you want to make progress at something, you need to drop your old habits and try something new. There is no guarantee that it will work, but if you do not try, you won’t be able to improve.

If you think you know something about chess training for sure, that something is probably wrong. That is the exact thing you are ready to fight for and constantly proving to all your friends. To make progress at something you need to first make changes in yourself.

One chess player send a long email to me, how nothing works for him in terms of chess improvement. He explained in great details about how he bought dozens of chess DVDs, chess books, and latest chess software, hired 3 different 2400 – 2600 rated coaches and still cannot make much progress. Then, at the end he asked me quite skeptically, if the 21 Days Chess Course will help his game.

Before giving him an obvious “no” answer which came up to mind rather quickly I asked him about how exactly he used the training materials he already has and how he worked with these coaches. After he replied everything became pretty clear.

He said that he watches GM-lecture DVDs before bed time, and reads the chess books skipping most of the “notation nonsense” that he could not understand. He also enjoys playing online chess, and does not know how he still has 1300 elo after completing nearly 7,000 games.

I suggested him to focus on one book or DVD and try to actually understand the material deeply with a chessboard and a notepad. I explained to him that in order to improve he needs to treat example games not as a spectator, but to actually think why certain moves were played. A month later, he replied to me saying that he added 100 elo points to his rating, after finishing 20 pages of a book. That is the most point he have added since 1995.

Hello Yury. I received your chess stagnation e-mail and I agree with some of it. I have read in the last year about 22 books. Plus dvd’s. I informed you that I have parkinons disease and sometimes my muscle spasms affect my game. The main problem is the number. I play mostly on line. The chess website see’s you as 1000 and play you as only to play in your rating rangee. They’re not going to match you to1800 or an 1800 with a 2300. That number is not as sgnificant as we behold. When am I going to get to play chess? I respect somebody making it to 2500. That’s a lot games won but that doesn’t mean he can win all the tme. I have a book: 100 AWESOME CHESS Moves. In the book Bobby gets beat real bad. That’s just a number. Anything an happen in a chess game. I don’t know everything and I know There’s a lot of good and bad chess books. I hope I improve. I’m 52 and I’m not shooting for master. I just want to be a good chess player over all. John Moyer

I read your comment with sympathy.
Read books for pleasure and let everything come easily.
Here are some lists we prepared: