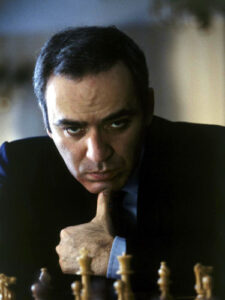 It is very true if we think about it. Let’s assume Player A knows that Player B does not like to take any risks, and comfortable playing solid chess. Therefore, to acquire a psychological edge over Player B it is necessary to take him out of the “comfort zone”. Player A should make the game sharper, possibly to sacrifice some material, where it is impossible to play without taking risk for both sides. Since Player B is not comfortable playing sharp, double-edged positions he is more likely to make a mistake and to lose a game, than Player A, who loves to walk on a razor blade. The piece sacrifice can be unsound if treated right but, from the psychological point of view, very effective. According to Professor Malkin, who has multiple works at the field of psycho-physiology of chess, a chess master who can better predict the opponent’s game and his strategy has a huge advantage (Krogius, Psychological Training for Chess Players, 22). It means that a player who knows the strengths and weaknesses of his opponent will try to exploit those, creating uncomfortable positions on the chess board, generating the most wins.

Simon Webbs, in his book Chess for Tigers writes, “before a World Championship Match, each player may spend months making a very thorough study of his opponent’s game, searching for weaknesses in his opening repertoire, identifying the types of positions in which he is at home or ill-at-ease, assessing the tendency to over-optimism or pessimism, and so on” (Webb, Chess for Tigers, 3).

A great example of home analyzes of the opponent’s strengths and weaknesses can be observed in the 2008 World Championship Match between 14th World Champion V. Kramnik of Russia and his contender, Indian Grandmaster V. Anand. Anand totally changed his opening repertoire and completely surprised Kramik during the second game of the Match, when he played “1.d4” instead of the usual “1.e4”. Besides the time wasted by Kramnik and his team for preparing the responses against “1.e4” during the past six months prior to the Match, the gigantic psychological pressure on Kramnik could not be underestimated and played it’s decisive role. Kramnik has been taken out from the comfort zone of his home preparation and thrown into the darkness. In result, Kramnik lost the Match “4½-6½” losing his title to Anand, who became the 15th World Champion (World Chess Federation, Anand is World Champion).

Even if the opponent is completely unknown and his strengths and weaknesses are hidden, psychological aspect of the game plays a crucial role in the competition. Webb suggests taking a look at the age of an opponent. Older players usually play more positional chess, they often familiar with modern opening theory, but tend to run into time trouble and make mistakes in later stage of the game because of the low stamina. On the other hand very young players usually play aggressive and tactical lines, but suffer in the endgame and simple positions (Webb, Chess for Tigers, 5). The conclusion is clear: for young players it is better to play tactical lines against the older players; for older players it is best to direct a game towards the endgame and simple positions, where no tactics is involved whatsoever. Without taking into an account psychology, it is impossible to judge what kind of positions it is better to play and what type of strategy to use against each group of players, based on their age.

At a novice’s level chess psychology plays even greater role than at a master’s level. It was observed many times that if the stronger opponent blunders a piece or a pawn, the weaker side just will not accept it because of the thought that there is a trap, they do not see, leading to immediate lose. How many new upsets to the stronger side could there be, if the weaker opponents could just eliminate this fear of higher ranked players? Grandmaster Tigran Petrosian once wrote: “The chess battle should be decided over the board, not in the head before the game” (Krogius, Psychological Training for Chess Players, 27). A player should not come to the game pre-programmed to lose just because his opponent is thought to be a stronger player, instead he should consider opponent’s strengths and weaknesses and use this knowledge to his advantage.

I am just thinking to myself, whoever you are, if you follow move for move the unconscious movement’s of another “The Symmetrical Defense” it breaks the self destructive pattern of behavior

Good analysis. …where is Anand…

akopinoy, rating should not intimidate you during the game. Rating does not matter… good moves do!

yes agree. from now on, i would rather apply psychology in playing chess especially on stronger opponent i don’t mind to play to lose but to play to win despite of ratings. thanks!

very relevant. thanks a lot for your insight. !!