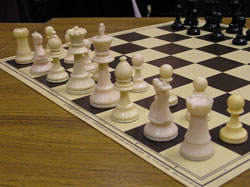 This article is a continuation of Rapid Chess Improvement: Evaluation of Positions, which covered the main things a chess player needs to work on in order to improve the game.

Opening repertoire is a very tricky thing to work on. You do not want to spend too much time studying opening lines which you may never play in actual game. At the same time you do need to know main lines because someone may decide to play them against you.

How do you know if you need to work on you opening preparation?

There are basically three cases which basically merge at some point when you’re really should start working on your openings.

Okay, we know when we need to work on the openings; the next question is obviously how to study the openings. Do we just get an Opening Encyclopedia which covers 100,000 openings and start reading it or do we just start playing the games with the new openings assuming we know the first 3 moves? If you have voted for the first option you’re obviously wrong… but don’t get upset, because if you would’ve picked the second option you wouldn’t be right either 😉

So how do you study the openings?

I was always against these ECO Opening Bibles which cover all the openings in the world in just 600 pages. In fact it isn’t enough pages to cover just one opening thoroughly. A lot better approach is to get an opening book dedicated specifically to the opening of interest. For example if you want to study Slav/Semi Slav Defense and play on the Black side you should be looking for a book which is called something like “Complete Slav/ Semi-Slav” or “Slav/Semi-Slav for Black” but not “Complete opening repertoire for Black” or anything of this very broad sort (by the way these are fictitious names, not real books). Remember if you really want to learn the opening the book must be focused on the specific opening, not on openings or chess in general. Many people miss this simple point and get surprised when they lose in their favorite opening, which they “study” well from the Openings Bible.

How to read an opening book?

Assuming you got a good opening book, dedicated to the opening you want to master, but what’s next? Most opening books, like most chess books, cannot be read as magazines. It means you can’t read only the instructions and skip that boring algebraic notations with the diagrams. The best approach is to have a chess board handy, so you can shuffle pieces around while reading the book.

Important: If you want to learn the opening well you should setup and play over the games described in a book on real chess board or a Fritz chess board.

When learning any chess opening from Sicilian Dragon to Nimzo-Indian Defense try to understand basic ideas, piece placement, attacking/defensive themes and pawn breaks instead of just memorizing the moves. This way, even if your opponent deviates from the book (which most likely will happen pretty shortly if you’re not playing a Grandmaster) you will be able to play well and will not get confused.

Memorization of lines is also important, but understanding of the moves is a must.

How to study those annotated games?

Any chess opening book has some sort of annotated games. The best approach to study the games is to replay them on a chess board (or on a computer) with no annotation and try to understand what’s going on yourself. After analyzing 4-5 such games you will have some idea what’s going on in this opening. Next you will replay these games with annotation and fill out the blanks which you missed the first time. You can find some annotated chess games here.

How long my opening lines should be?

There is no need to memorize 20+ moves opening lines if you’re playing below a Master’s level. However, this 10-13 moves that you need to remember and understand should include possible deviations. For example if you are playing 1.d4 you need to know what to do against 1…d5 and 1…Nf6. In perfect case you should have a line against each possible scenario, so if you’re playing 1.d4 you need to know how to respond on Slav/Semi-Slav, Queen’s Gambit Declined/Accepted, Nimzo/King’s-Indian, Benoni, Central Counter Gambit, and Dutch. It is a good idea to write you opening preparation on paper or by using ChessBase Database with multiple lines and a short annotation. After you do that you’ll have pretty good idea of the openings you’re playing.

You need to practice playing the openings against a partner, online or against a computer in order to safely apply them in real games. Playing against a stronger partner is the best option. You can agree what lines you want to practice and what color you play. If you don’t have a partner which is familiar with the opening you want to train you can try to set the main position on a computer and continue from there. Computer is a great training partner is used right! Online is also a good place to try your novel opening s, but unfortunately you may spend a lot of time waiting when your opponent will finally decide play the right moves. So it is best to use online training as the last alternative if no other is available to you. You may want to check out the quick opening guide for basic opening traps and checkmates.

Very good.
Love how the articles are written in depth.
However I would like some pictures to show what the formations look like.

in the article you mentioned two recurrent issues wich appears in most of chess opnening books:
1-there are blanks to fill out
2.you have to work hard to grasp a pretty good idea of the opening…
but….shoud not the authors work harder to teach de ideas and help to fill the blanks,instead including variations with no explanation???…most of chess opening books become compilations of move….that is my opinion… 😕

Good point! Yes studying the GM game is definitely a must. However, it is difficult to understand why certain moves are made sometimes, so the explanation is required. If you have an access to commented GM games on a particular opening its even a better bet.

I would say study some GM games, and then pick an opening that you like and feel an affinity for. When you have found that, then collect as many games as you can in that particular opening, and play through them all.

Then and only then, once you start understanding why textbook moves are made, should you crack open a specific book containing theory on your opening.

[quote name=”TAIWO O”]Thanks i really enjoyed your write up and i gain a lot, the site is amazing and very educative, cheers.[/quote]

Thank you, my friend! We will make every effort to make the site even more useful and educational! 😉

Thanks i really enjoyed your write up and i gain a lot, the site is amazing and very educative, cheers.

This site is amazing. Thank you so much.