Leonid Kubbel was a prince among composers. I first saw an endgame study by him way back in 1970s. I still remember my awe and wonder seeing how the Black monarch was chased and mated with a lone knight. Ever since I became a fan of Kubbel. But then his admirers are legion. Great players like Smyslov, Timman and Nunn have been connoisseurs of his art. In his brief life he is said to have composed more than 1500 endgame studies and problems. The 1984 edition of his work (Leonid Kubbel by Vladimirov and Fokin) lists 466 endgame studies and more than 400 problems.

Although I had this Russian book for nearly two decades I never paid attention to the problems section. Recently when I had a look I was in for a surprise. Some of these problems are indeed beautiful. Here is an example. See if you can figure it out. 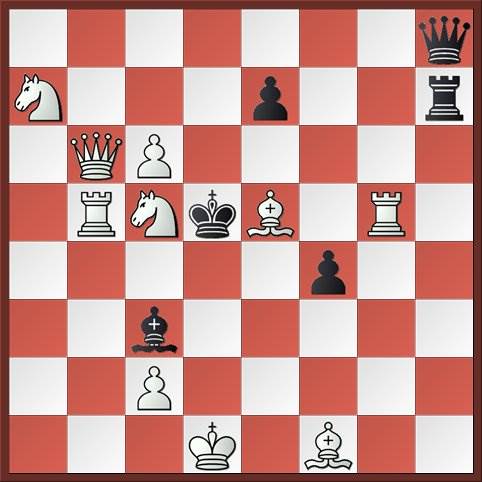 White to move and mate in two moves

Great Sir,
Thanks for your advice !!!
what is spectacular in this puzzle is the sacrifice of a worthy piece !!!
Again I thank you for the choice and proud that you are doing well for chess from your website.
See you soon and all my best regards to you and your team.
Goldfinch

Dear Goldfinch,
Glad that you enjoyed it.
You were close to the solution when you thought of bringing the queen to a-file with the idea of Qa2+.
Here I shall offer a simple hint to you and all solvers.
The first move in these problems is seldom a check, certainly not a discovered check.
In the present case it is a sacrifice.
In many others it is a quiet move with devastating effect.
Do look for it next time.
All the best.

Thank you sir,
I really enjoyed solving this puzzle !!!
Brain 2014 far from 1907
See you !
regards
Goldfinch

Dear Sir
Many moves lead to white victory.
for this beautifull problem I will choose the following solution :
1/Qa6 followed by 2/Qa2
thank you again

Did this position occur in real game or not? Would it help me to learn chess and beat other players? Please answer. Thank you.

Is it a grandmaster level study?

Dear Thomas,
The solution would appear soon.
Happy hunting till then!

Dear goldfinch,
Greetings!
Nice to see your attempt.
1.Qc7 may be met by 1…Qe8, 1…Qf6 or 1…Rh6.
It takes longer to mate.
We need only two moves.
Try again.
There is a happy surprise here.

Dear silverose licker,
You have to get your notation right.
If 1.Bxh8+ Be5 2.Qd8+ Rd7 (or 2.Rxe5 Kd6) and it is taking longer than the stipulated mate in two moves.

Dear jjsmith,
Studies aim for win or draw.
Problems aim for mate.
That’s the distinction.
In terms of composition this has a grandmaster standard.
You can solve it.
Everyone can.

Dear Atish,
No, this did not occur in a game.
It is an artistic composition.
I would not go so far as to suggest, solving such problems would help you to win games in real time.
From that point of view studies (win or draw) are more useful.
But solving these mating problems would help you to develop your imagination and vision.
You also learn some rare tactical themes typical of these positions.

Dear Aakash,
After 1.Bxc3+ e5, it still takes more than two moves to mate.
Hint:Try a move that is far from obvious.