It was a mystery that I had not been able to unravel for decades. Way back in 1990s I had found the following position in a wonderful book, Chess Wizardy, ABC of Chess Problems (Batsford.1996) by John Rice. The author happened to mention the following position from a game, Keres-Bronstein, Zürich 1965. But I had a problem. Keres and Bronstein did not play each other in any tournament in 1965. Did this position ever arise in a real game and who played it?

In 1965 Keres and Bronstein had finished a simul tour in Zürich and were treated to a farewell dinner at the home of Alois Nagler, President of the Zürich Chess Club. After dinner they obliged their genial host with a friendly blitz game (5 seconds per move). This position led to the finale of the game. 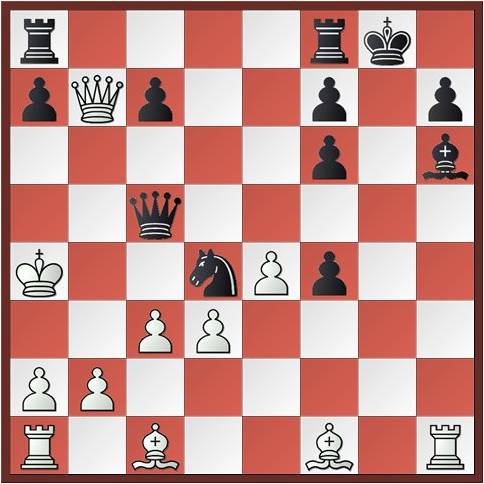 Note: thanks to those who noticed, we have corrected the diagram

Dear friend,
Our sincere regrets for the faux pas.
It is surprising that you managed to find the solution with an erroneous diagram.
Congrats.
Otherwise you are right.
Such flaws spoil it all.
Anyway it’s now corrected and the diagram is set right.

It’s alright, however, I did not solve the puzzle from the incorrect diagram, I saw the correct puzzle at the diagram right beneath and then solved it in about 3-4 minutes…

So, no work of genius here! Thanks for rectifying the first diagram with the black knight.

Looking forward to this sort of puzzles more. It really hammers your brain!! It does!

In the first figure you are showing a white knight on D4, but in the actual game there is a black one!…

it will take forever to understand a position if the pieces aren’t placed rightfully in puzzles!…

Easy enough… Just kidding. The anti-spam words I had to type were ‘u dumb’. Even the site knows I didn’t find the solution myself…

Dear friend,
Happy that you liked it.
It’s a pleasure to figure out the combination on one’s own.

Very interesting combination, took me 20 minutes to find it… but I’m no Carlsen.