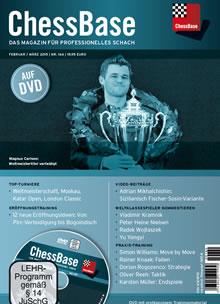 Seeing the latest issue of ChessBase Magazine, he complained,

“Why do we have to see him every time?”

“This time he is on the cover for good reason.” I explained. “He beat the challenge of Anand and retained the world championship title.”

Indeed, a precious part of this issue is devoted to the games of the Match.

As I have dealt with it before, let me mention other features of this issue.

Apart from the world championship the magazine also carries brief reports on London Chess Classic, Qatar Open and Petrosian Memorial Tournaments. With the exception of LCC blitz all the games from these events are included and a number of them annotated.

One player who figured in all the three events and narrowly missed the summit was Kramnik.

Nowadays Vlad is less concerned with sporting success and plays more for pleasure.

In London Chess Classic his sterling performance was his win over Nakamura. In this issue he has himself annotated the game. 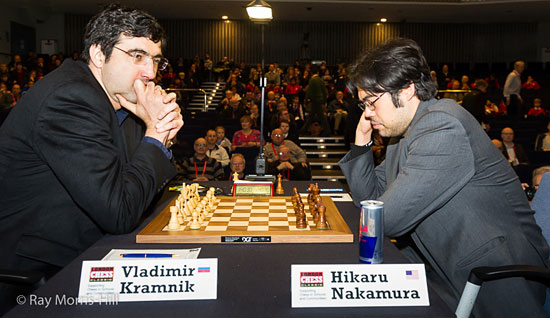 An important game that brings cheer to queen pawn players.

This brings me to other sections of the magazine. There are as many as 12 opening surveys ranging from Vienna Game to Reti Opening. You can take your pick.

This issue also carries trademark sections with middle game strategy, tactics and endgame play. For reasons of space I have not dealt with them here.

In all there are 1479 games of which 115 are annotated. This time I did not see the feature, Telechess Section with CC games. Hopefully, commentators, Robert Alvarez and Juan Morgado would be back in the next issue.

A more detailed review of the magazine is here.