Our columnist offers a review of a recent issue-Ed. 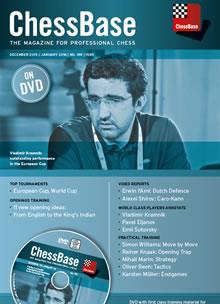 The last quarter of 2015 saw fierce battles over the board. In this issue of ChessBase Magazine we find games from the World Cup and European Cup, besides other events like the Poikovsky Tournament.

I was particularly interested to see the final duel between Karjakin and Svidler from the World Cup. 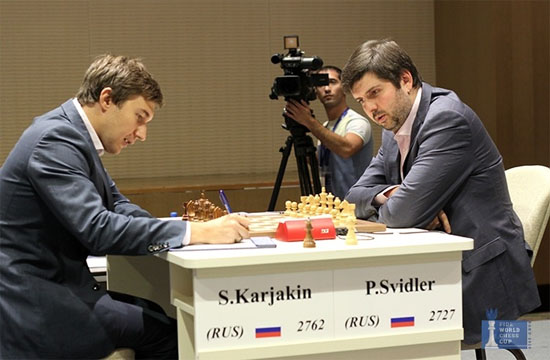 As is known, the first two games resulted in the score 2-0 in favour of Svidler. In this magazine Mihail Marin offers detailed annotations to both. He has an interesting explanation to offer for Karjakin’s blunder in the second game. Here is the position:

At the end of his annotations Marin comments:”With hindsight, Karjakin’s blunder can be regarded as a non-intentional psychological gambit. Had the game ended in a draw, Svidler might have kept his composure and his minimal advantage on the score table, but facing the perspective to win easier than expected he took a few highly uninspired decisions.”

This is at best a debatable point. In fairness to Svidler he was not complacent. “Is it over?” a reporter asked him in the press conference. “No!” he replied. “It will be over only once I get that half a point.” He played energetically in the next game presenting his opponent a terrible choice. Either he had to exchange queens and take a draw or take risks and fight. Karjakin courageously chose the latter. As he himself put it later, he thought it would be better to die like a man. So it was. He took appalling risks when he sacrificed his knight on the 25th move. Svidler accepted the sacrifice and blundered twice, first missing a win and then a draw. 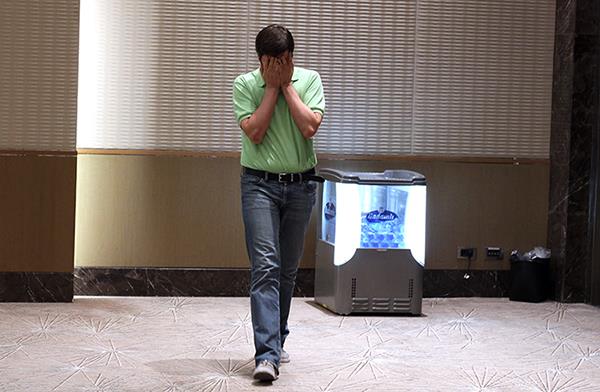 Here is what happened.

So far we have looked at what the computers and commentators found. What about the players themselves? As Svidler revealed in a later interview, he did see 28.Qc3! that pinned almost all Black pieces and won. But after 28…Qf4 or …Qf5 he still had to calculate some variations. Then he saw 28.Rxf2 and everything appeared simple. After 28…Qxe3 29. Rxe3 he would exchange rooks and be a piece up with a knight fork. So when he saw 28…Qh4 he was stunned and was in no frame of mind to cope with the changed scenario. He was still not lost. Reeling under shock he blundered again and capitulated. The critical variation with 28. Qc3 runs 28…Qf5 29.Rxe8 Nxh3+ 30.Kh2! (30.Qxh3? Qxf1+ 31.Kh2 Qf4+ =) Qxf1 31.Nxd5. Karjakin who offered this variation in an interview days later said, he only saw 30.Qxh3? over the board, and not the subtle 30. Kh2! that won. How many of us would have found it in a tense finale at the World Cup? Both players deserve cheers for their bravura performance and sportsmanship.

The European Team Championship was won by Siberia, the team led by Vladimir Kramnik. In this issue Vlad himself annotates the game with Topalov (his “favourite opponent” as mentioned here with delicious irony). 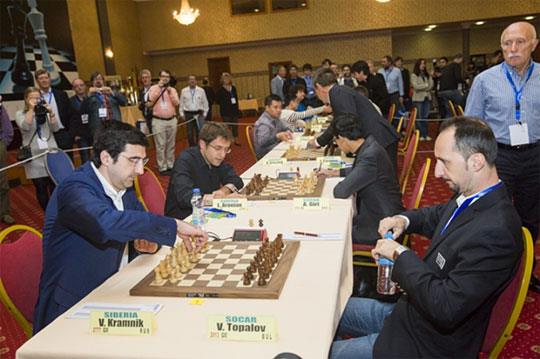 Among others I found games from the Poikovsky Tournament (won by Korobov and Bologan) interesting. The participation of “old” gladiators, Morozevich and Shirov (“Who said, we are old?”) led to some exciting play.

I would have loved to see games from the World Rapid and Blitz Championship here. Hopefully, they would find their way into the next edition of MegaBase

This brings me to other sections of the Magazine. There are 11 opening surveys ranging from the Sicilian to the King’s Indian. Among them I would single out Robert Ris’ analysis of Sicilian Wing Gambit and Alexey Kuzmin’s treatment of a new line in King’s Indian Classical Variation.

I missed Telechess (column on correspondence chess) in this issue.

Perhaps it would be back soon.

Credits: The image of Svidler is from the official site Of Russian Chess Federation.