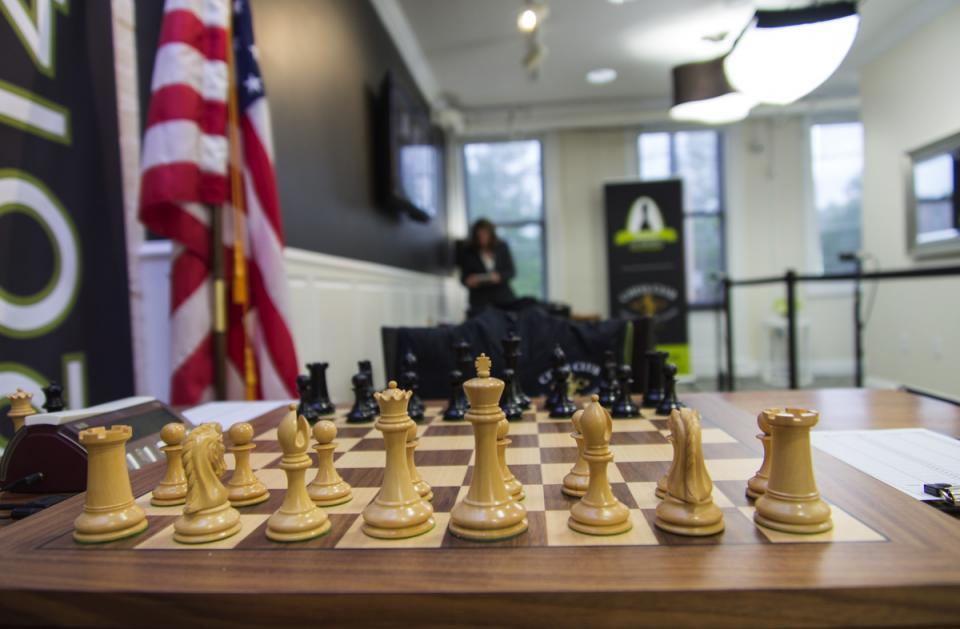 Returning to the St. Louis Chess Club in the chess capital of the U.S. for round 5 of the U.S. Championships and U.S. Women’s Championships we see GM Var Akobian make a move at the leaders with a win as black over Timur Gareev.

Akobian out played his opponent in a challenging end game. Alejandro Ramirez defeated Mac Molner to stay competitive in the tournament.

As black, Daniel Naroditsky beat Ray Robson. This game followed the same sequence at 10 moves as Pillsbuy – Hallprin in 1898. From that point Naroditsky showed that his book mastering complex endgames was no fluke as he completely outplayed Robson in the end game.

Tournament leader Alexsander Lenderman drew Sergey Edenburg while Kamsky drew Shankland. Onischunk and Friedel also drew. At the end of the round Lenderman was still clear in first place with 4 points with Garrev, Kamsky, Akobian and Onischuk all grouped at three. Ramirez and Naroditsky each made up valuable ground to stay competitive for the title at 2.5 points. The women’s side in round 5 was all draws except Zatonskih as black beating wunderkind Eswaran. With the win Zatonskih moved into a tie with rival Krush for the first place. 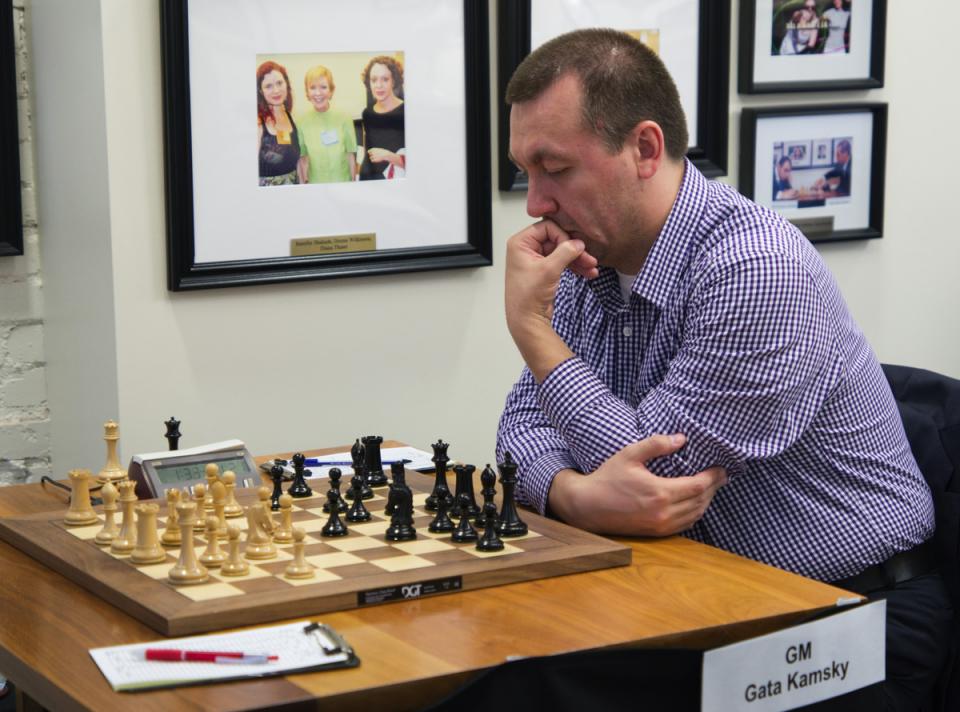 Round 6 saw Lenderman lose as white to Shankland and Akobian defeating Ramirez. This launched Akobian into a tie with Lenderman on top of the standings with 4 points. A total of 9 of the 12 players are still only one point out of first place with 3 or better. Naroditsky is one of them with a draw against Erenburg. Kamsky and Onischuk drew to be in a tie for third with 3.5 points. Robson with a win as black over Mac Molner moved to 3 points as well. Josh Friedel stole an opportunity from Gareev defeating him to move them both to three points. The Women’s side saw Zatonskih beating Baginskaite while Krush could only manage a draw against the lovely Alisa Melekhina. 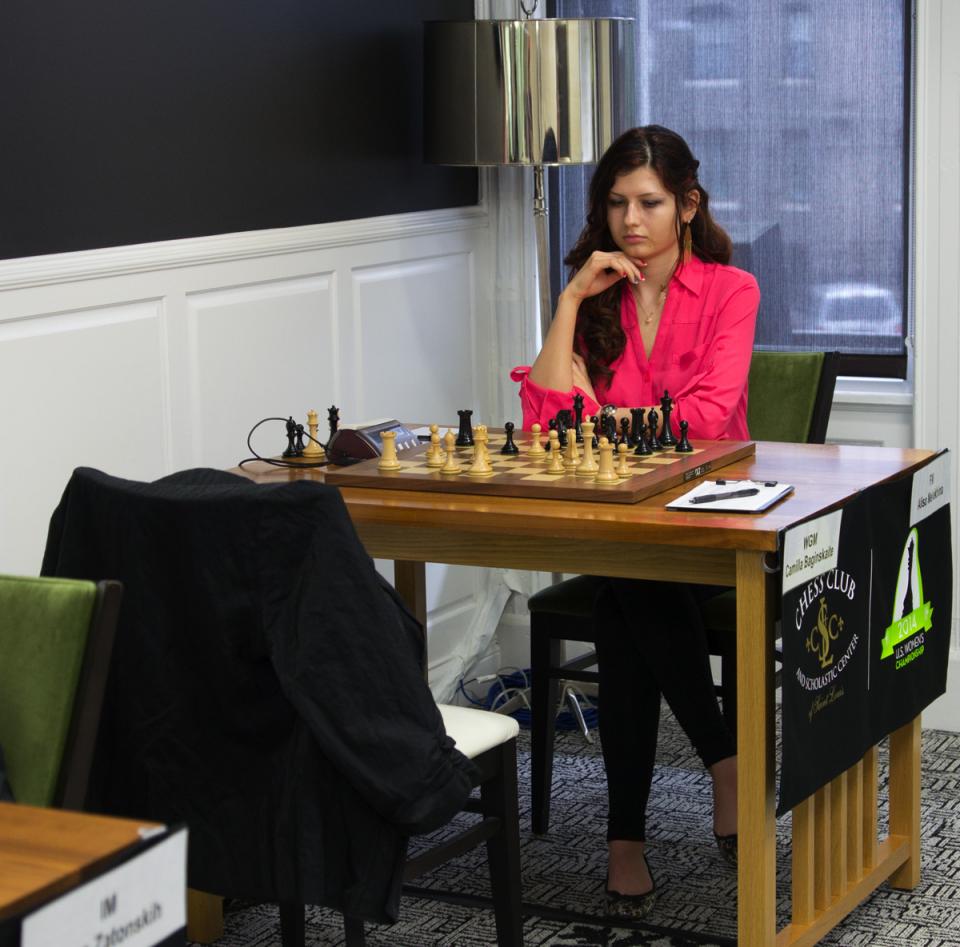 Krush was the only player in this round to draw with the white pieces as the white won the rest of the games. Nemcova defeated Eswarad. Zenyuk defeated Ni. Abrahamyan secured a much needed win to stay in the hunt for the title only one point behind Zatonskih.

Lenderman lost to Kamsky in round 7 and Akobian defeated Robson to get a first place all by himself. Naroditsky completely outplayed Shankland to remain one point behind the leader.

Friedel got his second win in a row this time against Ramirez. Erenburg and Molner drew in the battle of the bottom. The standings stood with Akobian on top with 5 points having not lost a game. Kamsky was close behind with 4.5. Four others Naroditsky, Friedel, Onischunk and Lenderman all remained in competition for the title with 4 points.

Irina Krush could only manage a draw against Foisor again in this round while her main rival Zatonskih defeated Melekhina. Eswaran got a much needed win against Zenyuk. Nemcova defeated Baginskaite wile Ni and Abramhayan drew. With only two rounds to go Zatonskih with 6 points had a full point lead over Krush with 5. A critical pairing in the round 8 is looming between the two with the fate of the tournament possibly at hand. Abrahamayan sat a point in a half behind Zatonskih needing a lot of luck to possibly win the tournament.

Lenderman recovered from his loss to Kamsky in round 7 defeating Onishuk in round 8. In the game Onishuk deveated from the main line on move 10 with Nd2. Later the game got interesting with Onishuk having two center pawns for a Bishop. Onishuk blundered on move 38 costing him the game and his slim chances of still winning the tournament became even less hopeful. 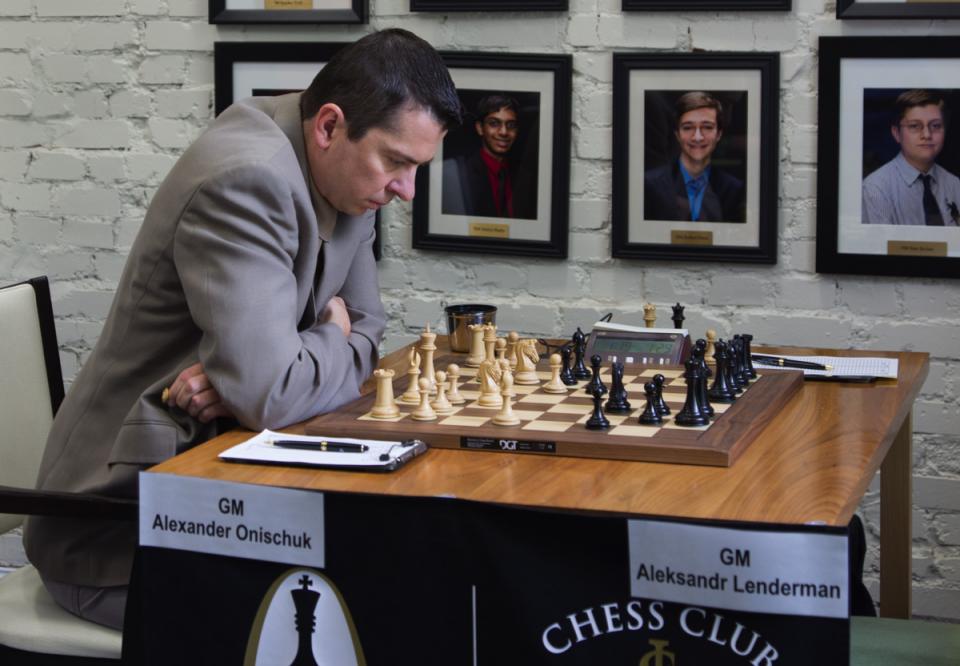 Akobian kept his lead by defeating bottom dweller Erenburg. The rest of the round 8 games on the men’s side all ended in draws. Akobian leads with 6 points with Kamsky and Lenderman a full point behind with 5. Friedel and Nardoitsky each clawed their way back into contention with 4.5 points.

Credits: images and games used in this article are from the official U.S. Chess Championship website