Journey to the Chess Kingdom: Review 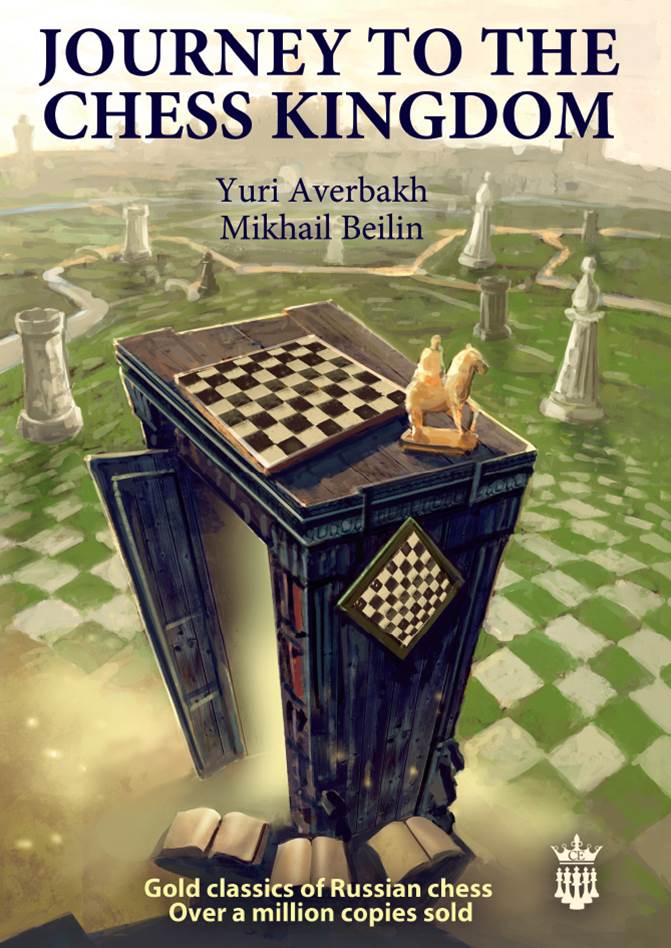 GM Arkadij Naiditsch presented a copy of “Journey to the Chess Kingdom” to me during the recent Chess Olympiad in Tromsø. The cover and illustrations are quite attractive and stand out in a positive way among the popular “chess board on the cover” designs. The diagrams are neat-looking and the paper is glossy and nice to touch. Overall, the book has a positive aura and feels inviting to read.

GM Yuri Averbakh (born February 8, 1922) is the oldest living grandmaster in the world and one of the most renowned writers, coaches, arbiters and players. His book “Journey to the Chess Kingdom” has sold over 1 million copies internationally, but it has never been published in English before. This edition by Chess Evolution has been updated and improved to reflect the state of affairs in the chess world as of year 2014.

Many top players consider “Journey to the Chess Kingdom” to be one of the best chess books ever written. Here are just a few quotes:

My first chess book was “Journey to the Chess Kingdom” by Averbakh and Beilin. And it was a very good one! – GM Alexander Khalifman, FIDE World Chess Champion (1999-2000)

I hope that the English version of “Journey to the Chess Kingdom” will introduce you and many other readers to the fascinating world of chess. Good luck! – GM Adrian Mikhalchishin, FIDE Trainers Commission Chairman

For those of you who are making their first steps in chess, I recommend taking a look at the wonderful self-study book “Journey to the Chess Kingdom” – GM Alexandra Kosteniuk, Women’s World Chess Champion (2008-2010)

The book is primarily intended for children and has thus been written in a light and captivating style. Both kids and adults will feel themselves as heroes of a fairy-tale while flipping the pages of “Journey to the Chess Kingdom”. If you have ever wondered what the secrets of the Russian chess school are, then this is the right place to find an answer. By reading the text carefully, solving the exercises and playing some games you should be able to progress from not knowing how the pieces move to Expert level (roughly FIDE 2000). Notably, this is a self-study book, so you won’t have to pay for expensive coaching or worry about learning something irrelevant or useless: GM Yuri Avebakh is a world-class expert in coaching.
The first chapter introduces the reader to the rules of the royal game and teaches one how to use the chess notation. Chapter two is dedicated to basic mating schemes: just like Jose Raul Capablanca, Yuri Averbakh believes that chess should be taught starting from the endgame. Chapters three and four cover typical middlegame guidelines and plans. Chapter five deals with opening principles, while chapter six provides an overview of the most popular chess openings. Importantly, the emphasis is on giving insights and explaining ideas and principles as opposed to advocating mindless memorization of long lines. This is what Viktor Korchnoi meant by saying: “Chess you don’t learn, chess you understand!”. In chapter seven the authors offer additional advice on how to play the endgame. These tips truly belong to the “must-know” category. Chapter eight covers some of the most brilliant games in the chess history: GM Yuri Averbakh and USSR Master of Sports Mikhail Beilin share their succinct and instructive annotations with the readers. Chapter nine features biographies and masterpieces of all the world chess champions, from Wilhelm Steinitz to Magnus Carlsen. The concluding chapter addresses the topic of innovative technologies in chess: Space vs. Earth and Computer vs. Human matches, as well as the duels between modern chess engines. The final section of the book is a test composed of 60 exercises aimed at helping the player additionally improve one’s skills and evaluate one’s level of proficiency in chess.

“Journey to the Chess Kingdom” is a classic masterpiece and a pleasure to review. It belongs to the deluxe category and firmly deserves 5 stars out of 5.

When is the 2014 version going to be available in the US?