The US Men’s and Women’s Championships kicked off on Thursday May 8th. The tournament is always interesting and full of surprises. The defending champions are GM Gata Kamsky FIDE 2778 on the Men’s side and GM Irina Krush on the women’s side. Timur Garrev FIDE 2751 is expected to be a major challenger on the men’s side as he was last year when he came into the tournament after an exciting 33 person blindfold simul right before the event winning 29 and drawing 4

The primary competition against the 5 time US women champion GM Irina Krush is her rival and 4 time US womens champion IM Anna Zatonskih. The main competition for Irina and Ana are 2 time runner up and 3 time third place finisher WGM Tatev Abrahamyan, 2000 US Women’s Champion WGM Camilla Baginskaite and PhD in Mechanical Engineering WIM Iryna Zenyuk, The most intriguing entry on the women’s side is 13 year old National Master Ashritha Eswaran. She is the second youngest ever participant in the US Women’s side with Irina Krush being the youngest. Ashritha just started playing rated chess in 2008. 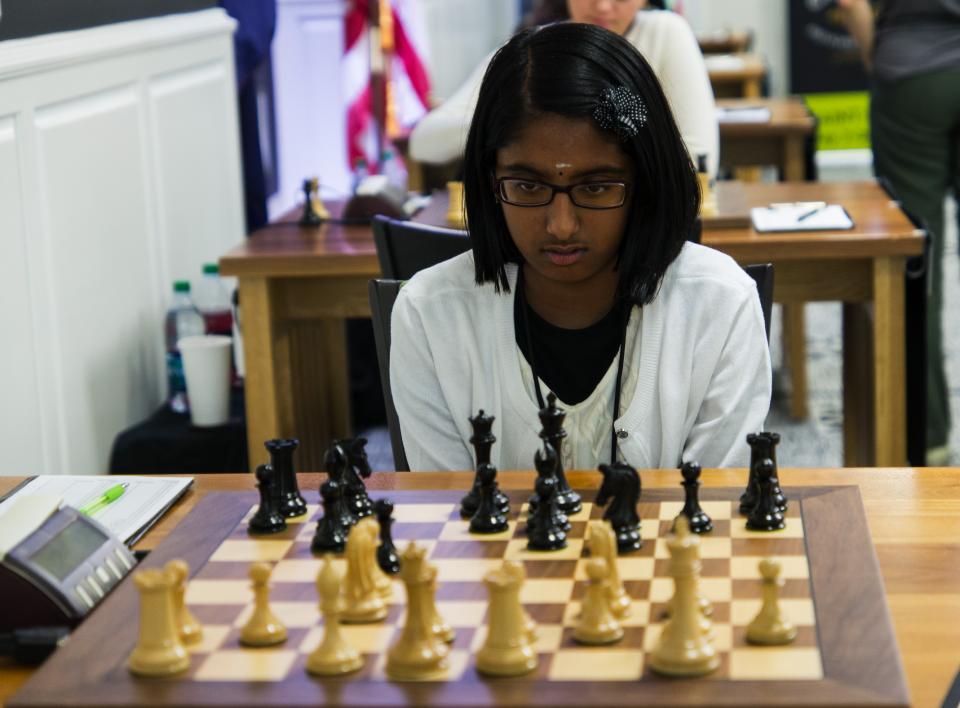 The first round featured the match-up of tournament favorites Timur Garrev and Gata Kamsky. This game seemed to end before the other participants even started their games as they agreed to a draw after only 14 moves. Alex Lenderman won as black over Josh Friedel and Ray Robson defeated Sergey Erenburg. All other games on the men’s side were drawn in the first round.

On the Women’s side the only draw in the first round was Iryna Zenyuk vs Anna Zatonskih. Tatev Abrahamyan defeated Alisa Melekhina. Tournament favorite Irina Krush with the black pieces defeated Katerina Nemcova. Sabina-Francesca Foisor defeated Camilla Baginskalite. The stunner of the first round was 13 year old NM Ashritha Eswaran with black defeated the much higher rated and experienced player Viktoria Ni. Eswaran played very well in the endgame after move 55.

Round 2 on the Men’s side ended in all draws. Alex Linderman secured a draw against one of the tournament favorites Timur Garrev. Alejandro Ramirez last years’ runner up as black drew against last years’ champion Gata Kamsky. Ray Robson and Alex Lendermen were the surprise co-leaders each with 1.5 points after round 2. 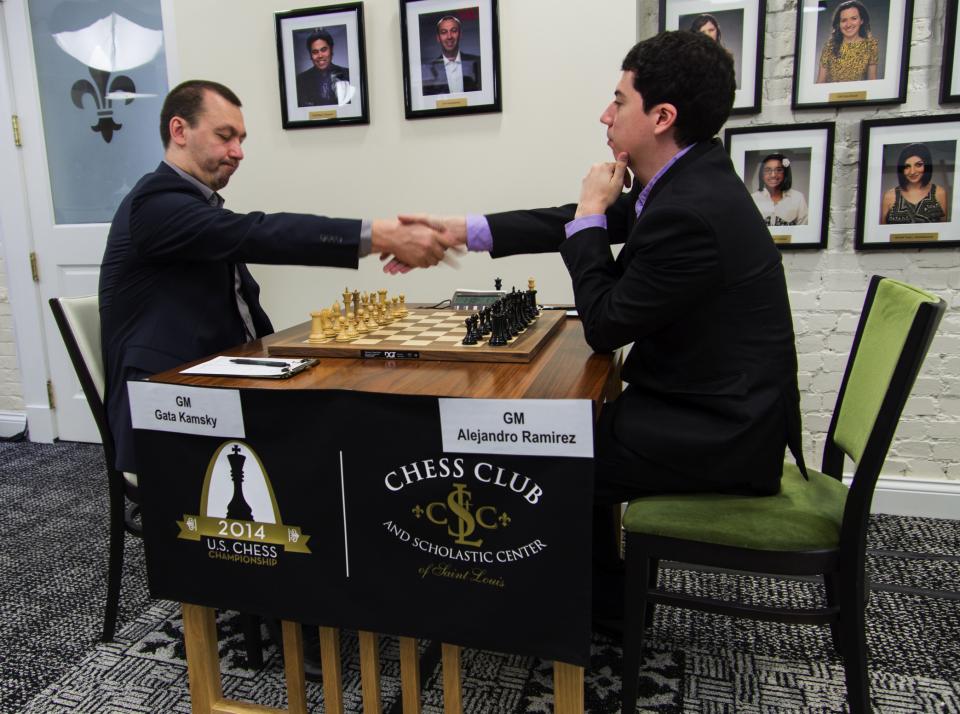 The women’s side was much more decisive as WGM Sabina Francesca Faisor as black defeated Fox Sports favorite player Alisa Melekhina. Former champ Anna Zatonskih defeated Tatev Abrahaman. The final victory was one of experience over youth as GM Irina Krush defeated first round darling Eswaran. Krush played and English opening which moved into uncharted territory at around move 13. The 15th move a6 by Eswaran allows Krush to take advantage of her piece development and the semi open d-file and weak d pawn Be7 seems to have been the better move here. On the 18th move black drops the b-pawn. See attached pgn. At the end of the second round on the women’s side Krush and Faisor each lead with a perfect 2-0 score. Zatonskih was close behind with 1.5.

Round 3 saw returning champion Kamsky draw Ray Robson. US Olympic team teammates Akobian andOnischuk draw. Garrev beats local Webster University student Ray Robson. The Surprise of the round was Alex Lenderman taking the lead in the tournament with a 2.5 score after defeating Ramirez with the black pieces. Ray Robson and Garrev were close behind with 2 points and Kamsky only able to draw in his first three games was a full point behind. 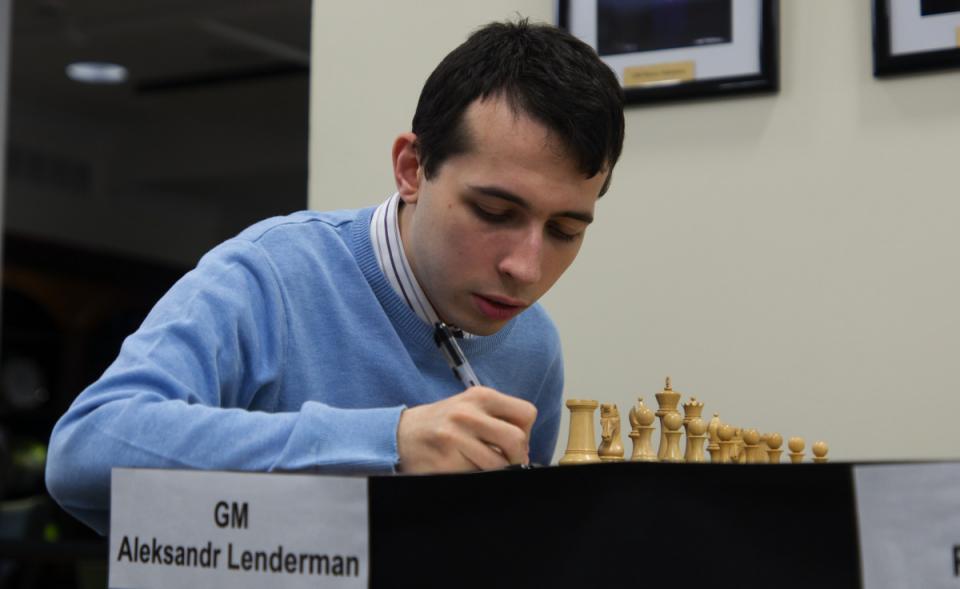 The women’s side had only one draw in the battle of good friends Iryna Zenyuk and Irina Krush drew. Tatev Abrahman recovered from her second round loss to defeat Katerina Nemcova. Anna Zatoskih continued her winning was defeating co-leader Sabina Francesca Foisor. Alisha Melekhina defeated Viktoria Ni. The youngster Eswaran rebounded from her loss to Krush to beat Camilia Bakinskate. Pre-tournament favorites Krush and Zatonsklh both lead with 2.5 out of 3. Close behind were Foisor, Abrahman and surprise Eswaran each with 2 points.

Kamsky and Onischuk both got their first wins of the tournament in round 4. Kamsky defeated Erengurg with the white pieces and Onischuk defeated Shankland. Garrev is continuing his winning streak by defeating Molner. Tournament leader Lenderman continued his control with a win over Robson. Lenderman opened with c4 and Robson pushed the opening to a New-Gruenfeld. On move 15 Robson made the game interesting sacking the exchange with RxB.

Irina Krush took control of 1st place with a win over Camila Baginskate while Anna Zatonskih drew against Viktoria Ni. Foisor also lost to Nemcova. The rest of the games all ended in draws.

Credits: images and games used in this article are from the official U.S. Chess Championship website.

Thanks for sharing your thoughts about US chess championship
2014. Regards

Awesome report… I wanted Lenderman to win but Gata got it.