10 Chess Patterns Every Player Should Know

We always hear strong players talking about the importance of recognizing chess patterns. What do they mean by that? What are these magical chess patterns we need to know and recognize? If you’re confused don’t worry, after reading this article you won’t be. You will understand exactly what chess patterns are and will learn 10 very important chess patters that every chess player should know.

Chess patterns are simply certain tactical positions which regularly occur in games. Chess masters are able to identify those patterns just briefly looking at the board and recognizing how the pieces can work together for getting desired results. The first step to learning chess patterns is getting familiar with them. Once you know some patterns, you need to practice solving tactical positions using those patterns. After solving enough of tactics, it will become second nature. You will be able to recognize chess patterns much easier and quickly find and apply them in your games.

1. Familiarize yourself with a tactical idea – learn a chess pattern

3. Start using those chess patterns in your games

To help you out, I will give you a list of some of the most important chess patterns you must know:

This is a typical forking structure with two pawns. It can occur in any stage of the game from opening to the endgame. The pawns are defending each other and even if the white’s king isn’t around, black still loses a piece. 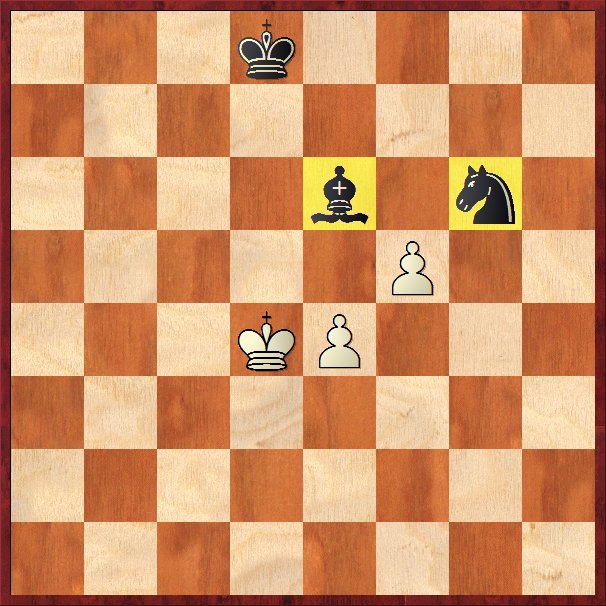 This is a very popular knight fork most often seen in the opening. If a queen moves, c2/c7 square becomes undefended. That idea is heavily used by intermediate players to win the exchange. The knight can get to c2/c7 square in just 3 moves from its starting position. Winning the exchange on intermediate level generally means winning the game.

Keep this important chess pattern in mind in your next game, maybe it will help you at scoring a win! 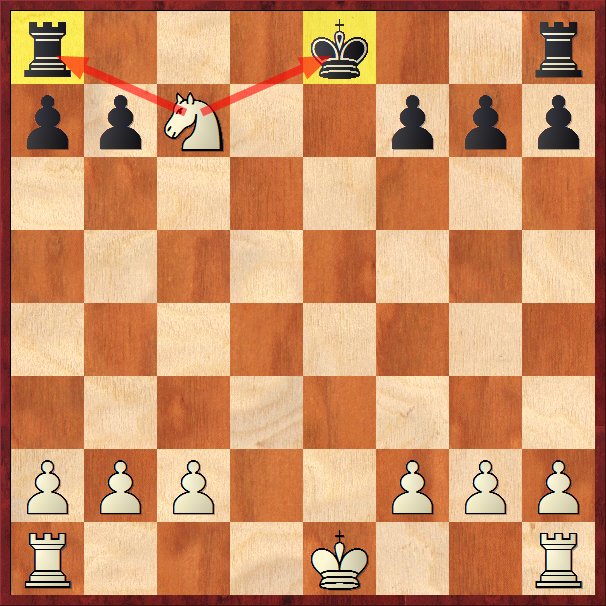 Everyone knows that rooks dominate open space. It not only means the rooks can get fast from one side of the board to the other. It also means they can double attack undefended or poorly defended pieces, winning material.

Every time you have a rook in the open and multiple opponents’ pieces on opposite sides of the board, you should check for this kind of chess pattern. It’s always good to pick up a free piece! 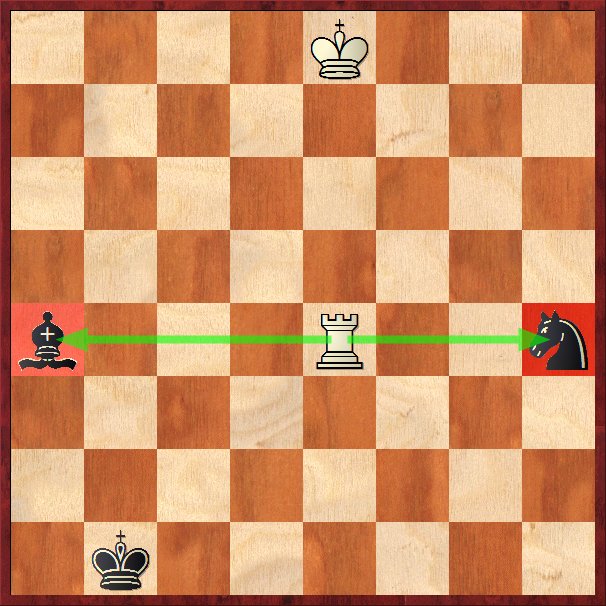 Rook is not the only piece capable of double attacking opponent’s pieces. Bishop is another great example. Contrary to rook dominating open files and ranks, bishops excel on open diagonals. If you see opponent’s pieces disorganized on the same diagonal, you may be able to recognize a winning chess patterns.

In the example below one of the knights will fall. 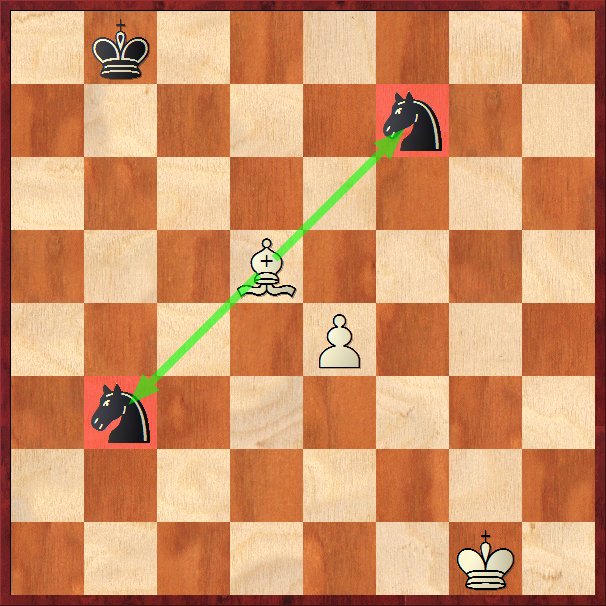 Bishop is not only great for delivering a double attack. It is also a perfect pinning piece. In the example below you can see a very typical pinning maneuver that most commonly occurs in the opening.

Bishop pins the knight on f3/f6 square to the queen. The knight is temporarily immobilized because moving it loses the queen. This is a relative pin because the knight can move if absolutely necessary. 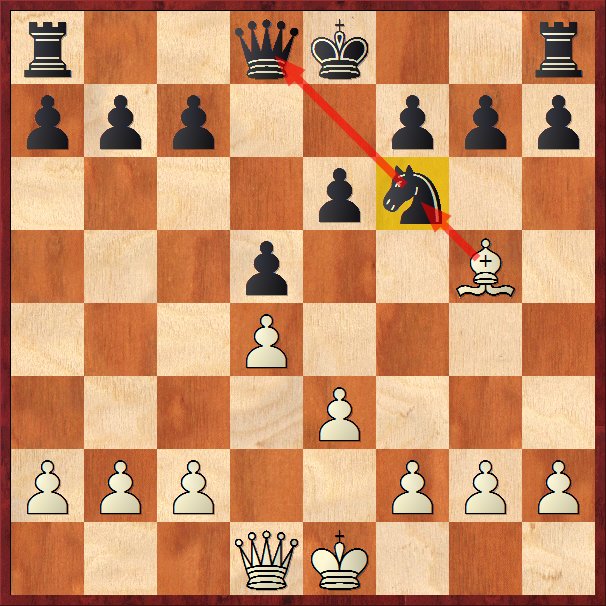 Contrary to the example above the queen cannot move because it will expose the king, which is against the rules of chess. This is a very important chess pattern because pins are a very powerful weapon and contribute to winning many games. The queen cannot move, and thus will be captured by the bishop leading to a draw. 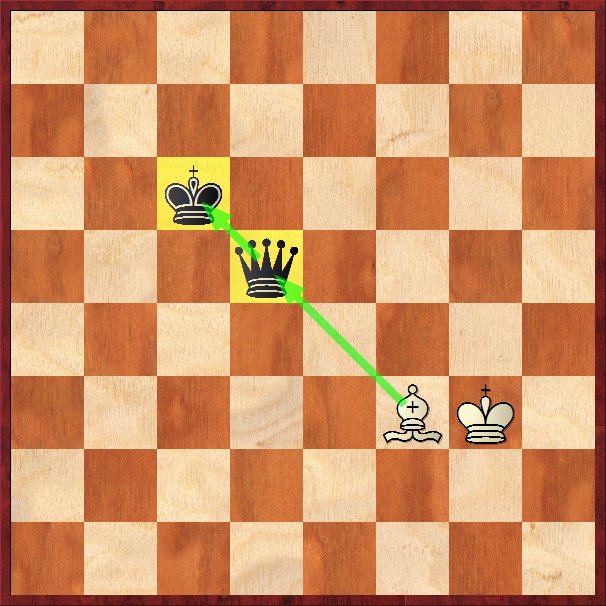 Take a look at the following position. White’s king is undefended, and if black captures it with his queen, white will be in check. However, black cannot play Qxd5 because his own king will be in check by the bishop.

Thus, it is an absolute pin on both queens at the same time! Notice that if black captures the bishop …Qxg4, white delivers mate-in-1 Qc6#. 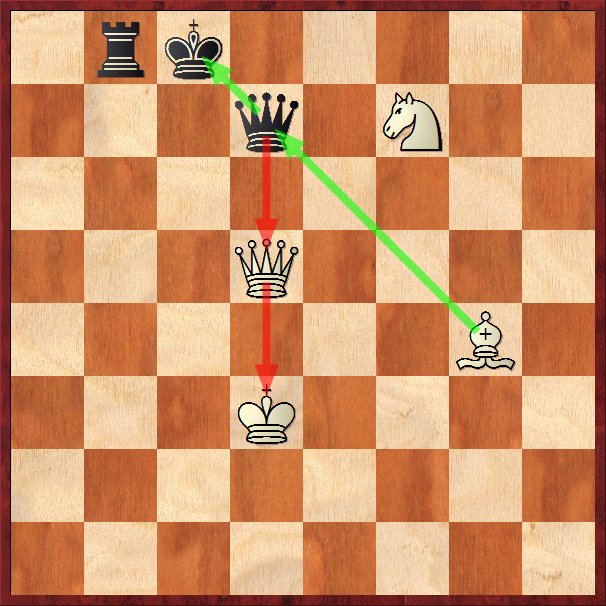 In the example below white is up a pawn and exchange of queens would result in losing endgame for black. A very common plan for black in these types of positions is giving perpetual checks.

In this position, there is no way for black to check white, without exchanging the queens. This is a very important chess pattern in queen endgames that you should always remember! 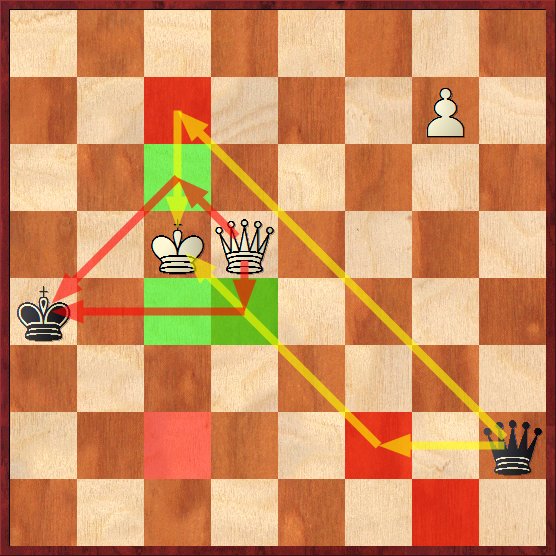 In the position below white is capable of winning black’s knight by forking it with… his own knight.

This is something you don’t see very often because one knight would generally capture the other knight. 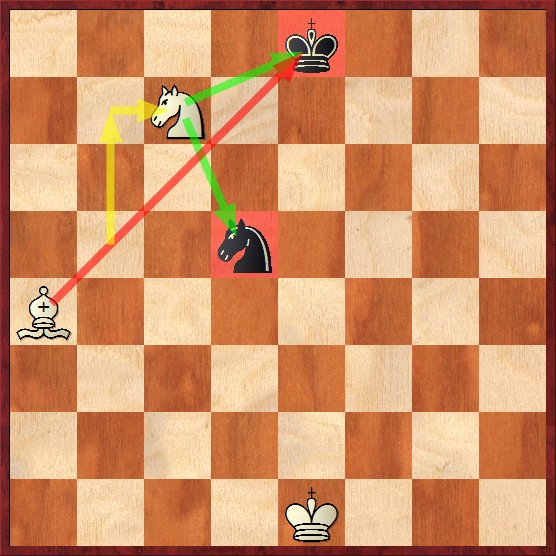 Smothered mate is common tactics which allow checkmating a king with a single knight. The king is obstructed by his own pieces, disallowing it to move.

In this case, the knight is attacked by the pawn, but cannot be captured because that would result in exposing the king. Keep this pattern in mind, it might help you to get an instant win right out of the opening. 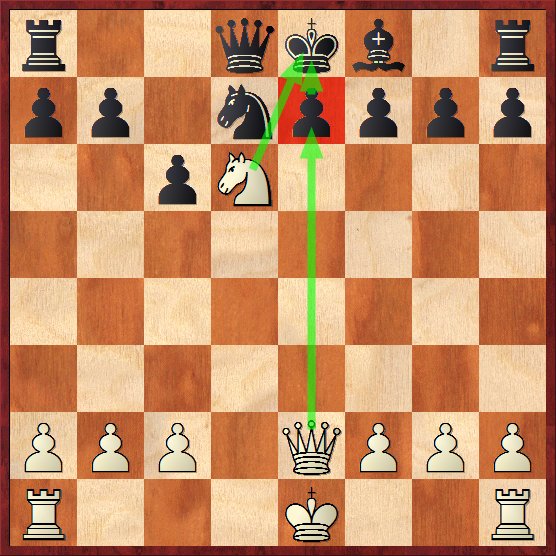 Patter 3 is impossible if black is on move that means white was in check before rock moved. So kind was forced to move.