Analysis of a position is a very important skill to master for a chess player of any level. Many chess players analyze positions almost spontaneously, without a well-defined plan.

They do not have a scheme in their mind that can guide the thinking process.

The outcome is incomplete analyzes and plenty of missed possibilities. This article is about to change that. We offer an easy to follow position analysis cheat sheet to use in all games.

Material on the board is one of the most important elements for position analysis. Keeping other factors equal, the side which possesses more material always has an edge. That’s why I recommend starting evaluation of any position by checking the material of both sides. That’s very easy to do.

Even though the material advantage is a very important factor to keep in mind when analyzing a position it cannot tell us everything what’s happening on the board.

If you are up a rook, but getting a mate in two, it would be silly to say that you have an advantage.

Therefore, the position of the king (or more precisely its safety) must be considered, taking into account all possible threats, mating plans, etc.

You can quickly check the safety of the king by first comparing the pawn structure and defensive pieces around him and then counting the number of attackers.

Activity of the pieces is the ability to create threats, control important squares on the chess board (such as weak squares) and/or ability to move freely around the board. This is a very important factor to take into account when analyzing a position, especially when other elements such as material balance and king safety seems to be equal.

To compare activity of the pieces for both sides you need to take each white piece and compare it with its black counterpart. For example, the white knight can be controlling 3 squares while the black knight controls 4.

The control of the diagonals (especially the long ones) by bishops and the queen often plays a decisive role in the attack on the opponent’s position.

The side which possesses such a control definitely has some positional advantage, assuming other things equal.

Control of the center (e4-d4-e5-d5 squares) is another crucial element that needs to be considered when evaluating a position. The importance of the center comes from allowing more possibilities for attack as well as reducing the possibility of counter-attack by your opponent.

The side that controls the center often has more active pieces and also a safer king position.

Control of space allows positioning your pieces in a more effective attacking/defensive manner and at the same time preventing your opponent from doing the same.

You can estimate how much space each side has by counting the number of squares controlled by the pieces and pawns on the opponent’s part of the board.

Usually, the side that possesses a spatial advantage should attack and pressure the opponent’s position. It is more difficult to coordinate pieces effectively with a lack of space.

Attacking multiple targets at once often decides the game, since your opponent cannot reorganize his defenses due to deficit of space.

The pawn structure is closely related to space, control of the center and strong/weak squares. At the same time you also should pay attention to pawn weaknesses such as backwards pawns, weak pawns, doubled pawns, etc.

You can also download (full-resolution) this cheat-sheet to remember the steps for evaluation of positions. 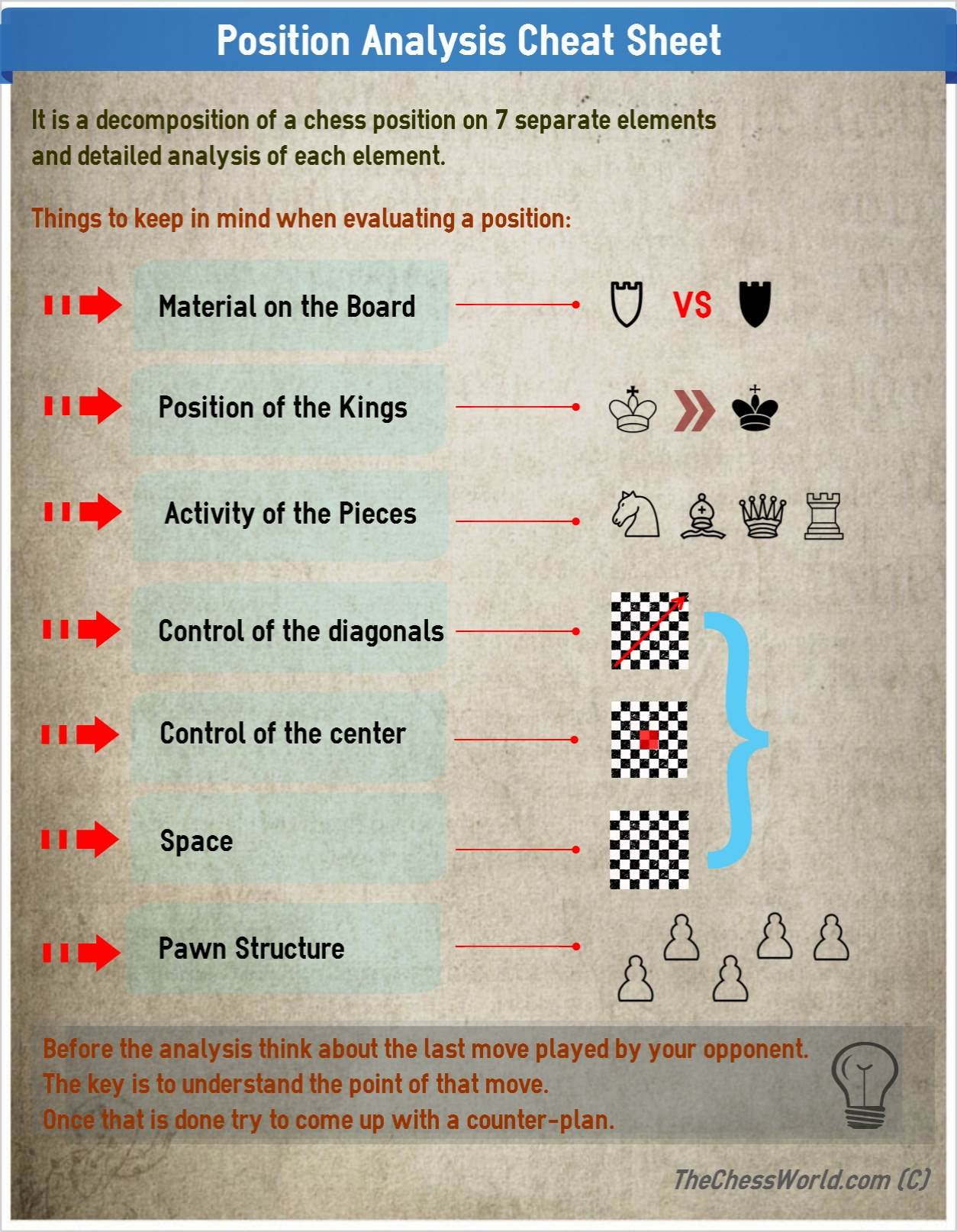 How to evaluate activity

This is useful article because of all tactical approach is given as bird eye view of chess board.thanks yuri

NICE ARTICLE AND SHORTCUTS…,BUT IF A PLAYER CAN NOT IDENTIFY WEAKNESSES -OR CREATE THEM- AND CALCULATE THE MOVES TO ATTACK THEM….THE POSITION ANALYSIS WILL BE SORT OF…USELESS….
BEST 🙂

Good simple rules for anyone to remember! Nice.

[quote name=”Joe”]Yury, this is by far one of your best lessons!
Thanks a lot!
Joe[/quote]

Hello Joe, thanks a lot !
Can you give me a little more feedback so that I know why it is the best lesson? 🙂 Is that because it’s visual?

Hello Mark, thanks for letting me know, the bug is fixed. You can now download it 🙄

Yury, this is by far one of your best lessons!
Thanks a lot!
Joe

Hi it asks for a username and password, is that our address for the email updates?