All chess players have lost games. All chess players have lost games while being in a good position, maybe up some material. It is usually the most painful experience when you lose a chess game that you were winning just a move before. A little, tiny thing you do in one second can ruin previous hours of concentrated work and great amount effort put throughout the game.

The price of a wrong move is too high in chess. For instance, in basketball you can make a mistake, allow your opponent to score and you can keep playing and still have a good chance winning the game. In the game of chess if you drop your queen or miss a mate there is no way you can recover. Chess players are all different, but in one thing they all the same: no one likes losing.

Due to individual characteristics, chess players react very differently when they lose a game. How many times have you noticed that you opponent got mad, aggressive, apathetic, upset or distressed after the negative outcome of their game? What about yourself? I’m pretty sure that you have some negative emotions when you lose a game, why else would you be reading this article right now? It is impossible to say what reaction is the best or the worst, but it’s not important how to react right after losing a chess game.

Note: don’t get me wrong, I believe and advocate the good sportsmanship habits, but that’s not what this article is all about.

It is important what you learn or do some time after that painful experience of losing. Some, in fact many, people give up after the painful defeat and say, they will never play this game again. They are not mentally strong enough to get over the lose and to keep playing. Some on opposite, get motivated by the defeat and turn it into a win by training and getting better. Then they come back and win.

GM Maurice Ashley stated: “Look at Garry Kasparov. After he loses, invariably he wins the next game. He just kills the guy. That’s something that we have to learn to be able to do.”

It is important to be able to forget the defeats for the time of the tournament. You don’t want to think about the piece you shouldn’t have lost in the round 1 game playing the round 3 game. What’s good about chess that even if you lost a game there is always another one that can be played. You always get a fresh start with all the chess pieces in place.

The losing, if used correctly, should be interpreted as a motivator to train harder and to win more games afterwards. Just imagine how boring would it be if you won every game you played. To get the sense of that play against the people that are very novice and you will very soon get bored. That signals that you don’t progress and stay at the same level. The only way to improve you chess is to play stronger opponents. The only way to get better at chess is to lose games, analyze them and make corrections. Then come back and play again. It’s that simple. Losing is not bad, it’s a part of that process of becoming a stronger player. It is the vehicle of one’s chess progress. Read what one of the greatest chess players of all times, Jose Capablanca says about losing:

Most players … do not like losing, and consider defeat as something shameful. This is a wrong attitude. Those who wish to perfect themselves must regard their losses as lessons and learn from them what sorts of things to avoid in the future.

The lesson to learn from the today’s discussion is simple: take losing as a part of training process, think that after each game you lost you will find and fix the cause, that will make you a stronger chess player. Don’t give up. Turn your defeat into the win!

Use the following diagram as your guide for chess development: 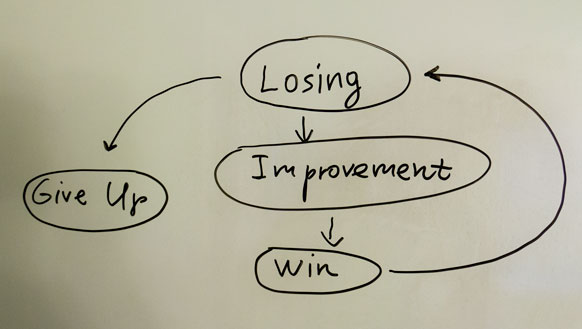 Great article. pleasure to read and take in…

Well I have been playing for over 12 years and I always analyze my games and these kind of stuff but whenever I lose a game that was suppose to be my win just one tiny mistake then booom I lost…these kind of loses is killing me…I mean I really don’t mind if my opponent is way stronger than me but when I’m dominating the entire match which is clearly my opponent was weaker than me then booom one single mistake ruin it all these kind of loss make me feeel so shame and sadness I can’t get over it I will keep thinking about it for days and days in my head asking myself why the hell i didn’t do that or that to prevent it why….sorry I can barely write here so stressed out and feeling depressed.

[quote name=”Atul Ranchod”]I’m playing an opponent that’s beaten me at least 50 times with no reprieve. I feel like I can’t play at all. I thought I was a good player. Apparently not! How do I turn this around?[/quote]
You should make some changes in your game or/and the way you play. What time control is the game? Why you lose? Time, blunders, tactics?

I would recommend you reading [url]http://www.thechessworld.com/learn-chess/17-chess-how-tos/13-how-to-beat-a-stronger-opponent-at-chess[/url]

I’m playing an opponent that’s beaten me at least 50 times with no reprieve. I feel like I can’t play at all. I thought I was a good player. Apparently not! How do I turn this around?