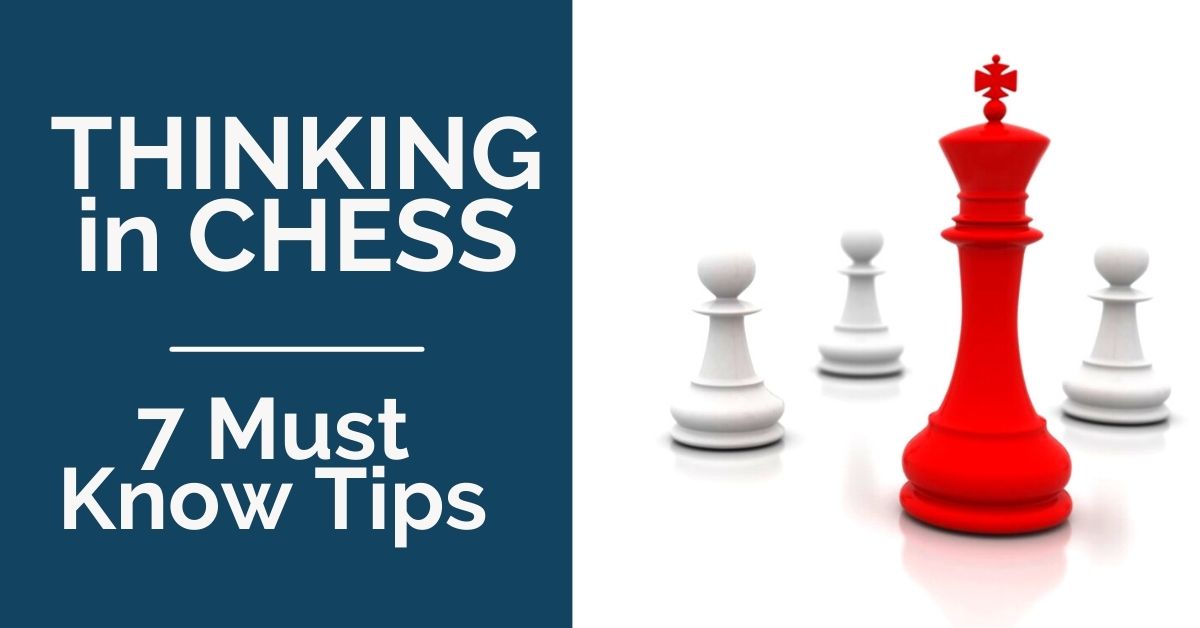 Thinking in Chess is something not very well covered in the chess literature. There are plenty of materials on the openings, tactics, and endgames.

This will put you one step closer to thinking like a Chess Master.

1. Thinking in Chess: Look at the Whole Board

As simple as it sounds, “seeing” the whole board is not something that comes naturally to most players.

How many times did we miss a sneaky check on the opposite side of the board, losing a piece? Or completely missed a discovered attack on a Knight located away from the center?

Chess players tend to focus their attention on parts of the board, or even certain pieces or pawns they find important.

For example, if there is a King’s Side attack going on, most likely you’ll be focused there. Meanwhile, it’ll be easy to miss simple tactics or a breakthrough on the Queen’s Side.

That’s called tunnel vision. Our brain misses certain obvious things because it’s focused on different elements of the board.

And if you think only club players are capable of those blunders… think again. Even Super-GMs sometimes forget about the existence of pieces [aka disappearing pieces] right in front of their eyes, instantly losing the game. That recently happened to Hikaru Nakamura.

Quick fix: Look at the whole board! Think about the position.  Don’t focus exclusively on action-packed King’s Side or center of the board. It is best to switch your attention to other parts of the board where seemingly nothing is going on. Perhaps, you’ll see something that your opponent didn’t notice and that something can win you the game!

2. Evaluate all the Checks, Captures, and Threats

This is a very classical and important piece of advice, that you can apply after each and every move.

Checks, captures, and threats are called forcing moves because they force you to take action. Either move your King/block the check, retake the captured piece (hopefully it wasn’t just a hanging Knight out there), or eliminate the threat (for example defend against a dangerous fork or a mate-in-1).

The reason why forcing moves is so important is that they force you to respond, preventing you from following your plan. That makes your opponent’s job a lot either and your moves much more predictable.

That’s why it is best to evaluate all the forcing moves beforehand and avoid any nasty surprises in the future.

3. Thinking in Chess: Figure out what’s your opponent is doing

It is always great to have an idea of what your opponent is up to. It’ll make it so much easier to attack or defend if you know what their next move will be. Unfortunately, we cannot read their mind. If that was possible chess would not exist.

Let me give two simple examples.

Example 1. Your opponent is lining up the rooks behind the pawn on an open file. Most likely they are planning on pushing that pawn.

Example 2. Your opponent has both bishops and the queen attacking your castle. Most likely they are planning on the king’s side attack.

Learn to read what your opponent is up to and it’ll help you a lot in the long run!

4. Figure out who has an edge

Figuring out what side has an advantage is very important for finding the best play.

The most straightforward way for figuring out who is better off is by following this structure:

If you want to learn more about this method of position evaluation feel free to refer to this post on Evaluation of Positions.

Once you determine what side has an advantage you should proceed with finding the best plan in the next point.

5. Thinking in Chess: Come up with a good plan

If you are the one with a better position, you must attack, otherwise, you are at risk of losing your advantage.

Contrary, if you have an inferior position you should be defending and finding the way to counter-attack.

It could be difficult to come up with a plan for the whole game.

In that case, it’s best to have a short-term plan.

For example, your plan may consist of relocating the knight to a strong outpost, exchanging pair of bishops, activating rooks, and going for a break in the center.

And remember, even a bad plan is better than no plan at all.

6. Stick to your plan

The most important thing after coming up with a plan is to actually follow through with your plan. I see many times, how club players find a reasonable plan, but fail to stick to it, and start planning completely opposite things.

Indeed, your plan may need to be modified throughout the way, based on what’s going on at the board and your opponent’s response.

7. Take your time and double-check your moves

This is perhaps the most important piece of advice. Think about the move you are about to make and try to find the reasons why it could be a blunder.

Once you ask yourself a few simple questions and confirm everything is alright, it’s time to make the move!

This simple chess thinking routine will soon become a habit and will eliminate the majority of blunders from your games.

Ready to Supercharge Your Chess Thinking?

Sir this was the best I had ever