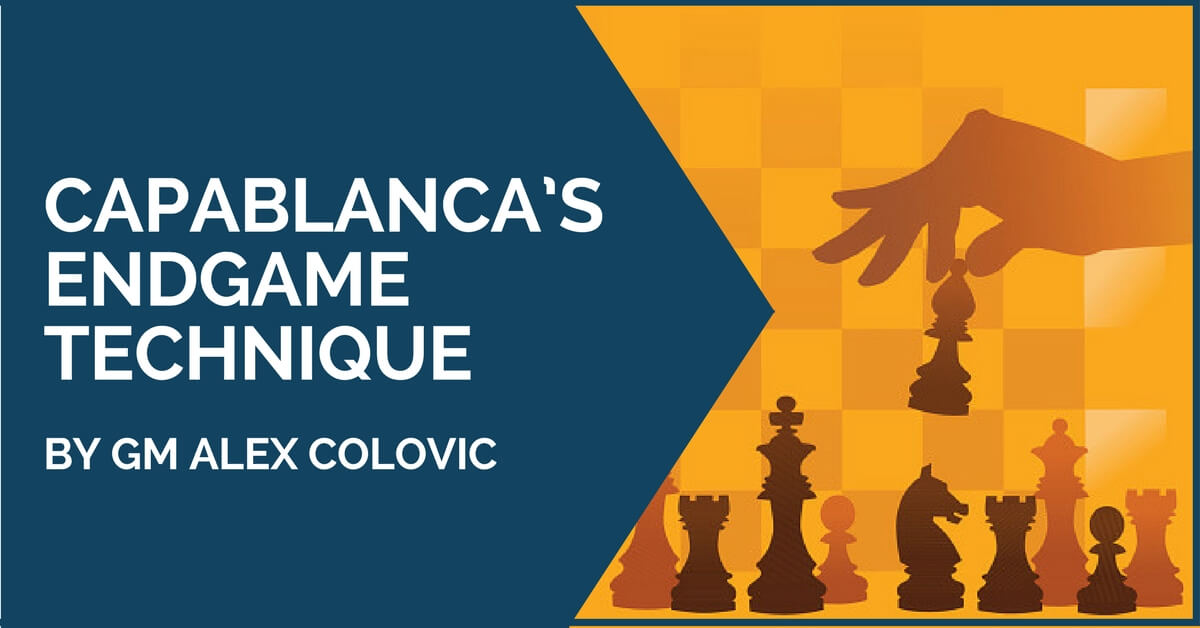 Capablanca’s Endgame Technique has always been one of my idols and the first conscious raise of my level happened after every day, 3-month study of his games. It was the winter of 2004-2005 and for three months, December, January, and February all I did was study and analyze Capablanca’s games every single day all day long. After this period I immediately won a strong open tournament and scored a GM norm.

What I was doing was going through his games and trying to understand why he played the moves he did. The point was to obtain a feeling for the position. Also, to understand why it felt right for him to play that particular move.

The most important thing I noticed was that he always had a very concrete idea behind every single move he played. His moves were of utmost precision. They were an immediate reaction to his opponent’s moves.

Capablanca’s endgame technique is considered one of the best of all times. It was ruthless and efficient, never giving counter-chances to his opponent. He was always striving to improve his position, even if it was a little bit. He always moved forward.

To illustrate these principles I took a famous position from his game against Ragozin from the Moscow Tournament in 1936. The starting position has comments by Capablanca himself and these are very insightful of the way his mind worked.

If you look at Capablanca’s games superficially you may get the impression that his moves were easy and that perhaps even you could have played them. But this would have been very deceiving. By carefully analyzing his games you will start to see that every “easy” move had a very concrete reason behind it and without understanding (and calculating) this reason it is impossible to play that move.

The elegance of Capablanca’s play consists of exactly that. It appears easy and natural and it is, but only by deep analysis do you start to appreciate the depth and inner logic of his play. Also, this involves quite a lot of precise calculation.

The precise calculation in endgames is something that I feel needs a bit of clarification. When you are realizing an advantage it is of vital importance to take a look at almost all reasonable options of your opponent. This is important in order to avoid unpleasant surprises by a move you may have missed. If you are unlucky that missed move may just be the move that refutes your intended plan. So the procedure is as follows: you decide you want to play a move; then you determine all of your opponent’s reasonable moves; only then, you start calculating and checking every single one of them.

Usually, the number of moves that you need to look ahead is small. Very often it will be 1-2 moves ahead, the typical “he goes there, I go here and I win a pawn.” This means that you will need to look at a lot of moves for your opponent, but the lines won’t be very deep. Width is more important than depth in this case.

This process will enable you to keep control. The control means that you won’t be surprised by any move your opponent plays and you will also have prepared a reply to every single one of them.

Want to learn more about this topic? Make sure to read this article.

It is a long process to obtain a good technique of realization of an advantage, but here I’d like to summarise the most important aspects that will likely help you towards that goal.